The Belarusian delegation to the 2018 Winter Games has announced they were warned by the International Paralympic Committee against waving or displaying the Russian flag at the Olympics in PyeongChang, due to the Russian team being banned, RT reports:

“We have already received an official notification which reads that we are prohibited from holding any public actions even in hotels located outside the Olympic village. It is one of the conditions of staying in the hotel,” Belarusian Paralympic Committee head Oleg Shepel told Pressball. “I don’t know whether other delegations received the similar notification, or it was addressed just to us.”

As to whether or not it was just addressed to Belarus, only the IPC knows, however, their motivation seems obvious.

In 2016, when the entire Russian team had been banned due to doping allegations at Rio, Andrey Fomochkin, a member of the Belarusian delegation unfurled the Russian national flag as a sign of solidarity with his Russian brothers and sisters. Fomochkin was a former USSR winter triathlon champion and also at one time a Belarusian Deputy Sport and Tourism Minister. 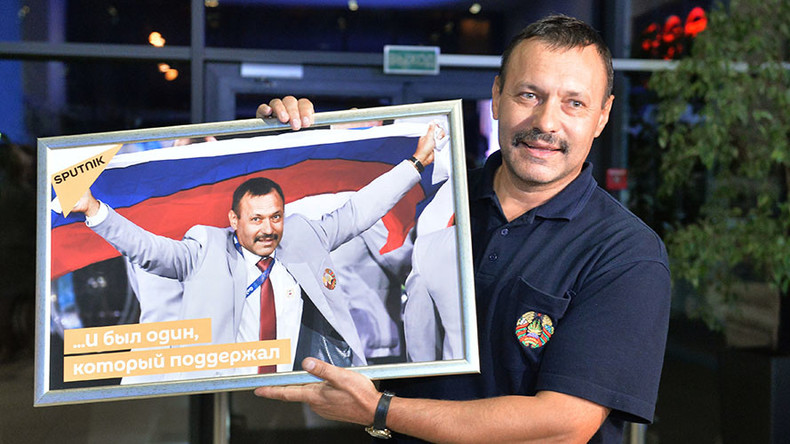 He later said he is giving the flag he waved to Russian athletes hoping it would be a special mascot for them.

His actions infuriated the Paralympic committee saying it was a ‘political protest‘ and revoking his accreditation for the games. Political protest eh, keep those words in mind, as we’ll discuss further down, these words may entrap them in their hypocrisy.

Russian athletes are also forbidden to participate as a national team, only permitted as “neutral athletes” who happen to be from Russia. As far as the Paralympic committee is concerned, even as there are 30-35 Russian Paralympians ready to participate, there will be no Russian presence at the Paralympics.

It is natural for Russians and Russophiles to feel as if this is a direct attack on Russia specifically, politically motivated due to all the scandals between Russia and the West lately.

The President of the Paralympic committee denies this, however as according to IPC rules, the flags from a Non-participating country may be displayed by athletes, neither from those in the stands. He told RT that Russia is not being treated exclusively in this matter, as officially, this would happen to any non-participating country.

“There is a policy in place that says that no flags from countries that are not participating in the Games (can be) in the stands,” he noted.

It is here, after putting all the information together, that this entire convoluted mess begins to show its true colors, that it really is about politics. Bare with me, this story is incredibly hard to follow because of the sheer pettiness, but it looks like a slip up in the Committee’s own words betrays their hypocrisy and real motives. In summary, this is what we are told by the Committee:

That is it! Did you catch the logical fallacy?

If it’s not about politics, and Russia is purely being treated like any disqualified country; if Russia is not being singled out, and this isn’t political, and it’s all just about “doping”, then why are they forbidding the Russian flags on the grounds of them being a “political protest”. I thought this was not about politics, and just about doping?

If it wasn’t blatantly obvious to all parties, that Russians are being targeted as part of a political agenda, with doping simply being the pretext, then why would flying the Russian flag be a political protest? If it’s not about politics, there should be nothing political to protest.

Please allow me to make an analogy. Say you are a member of a particular ethnicity or group, seeing as we are talking about the Olympics, let’s be creative and pick something from Greek mythology.

Imagine you are a Titan who wants to participate in the Olympics, you’ve trained your whole life. You have your titan flags and uniforms, and then I say to you.

Kalimera sas (Gooday in Greek) my Dear Titan. I regret to inform you, that you cannot participate in the Olympics as a Titan. Don’t worry, it’s definitely not because we are racist against Titans! Oh no! We love you people!

It’s just because we suspect there may be a few of you breaking the rules, so we have to ban all of you. It’s just the rules. We aren’t targeting you spesifically.

Some of you can still participate though…you just can’t be Titans…you can be athletes of Titan origin. I once again stress this is not beause we don’t want to support Titans. We support you guys. Ok? Oh, yes, and you can’t wave your Titan flags, and niether can your Mintaur friends, because that would be supporting Titans, and we can’t have that!

All in all, the rules may be the rules, but from an outsiders perspective, it all seems very childish and juvenile that people are not permitted to wave their favorite flags over a despite, regardless if they are Russian or not.

One would like to think that adults are mature enough not to start a conflict over the presence of someone’s flag, but alas, here we are.

It is interesting that Belarus was singled out and told they may not display the Russian tricolor. One could simply connect it to Andrey Fomochkin’s actions in 2016, but it must have been a fascinatingly racist conversation in the Olympic committee, practically as if someone said: “We better warn those Belarusians not to show their love for Russia.”

In fact, there is this general negative attitude in the West and in western controlled organizations, that any positive view about Russia expressed, let alone patriotism or love, is either an act of Russian propaganda, or a that of a “useful idiot” being misled by said propaganda. Whether you live in Russia, work in Russia, or want to live there, if you agree with Russia, or show any positive attitude towards it, as simple as showing a Russian flag, you are immediately singled out as being crazy, or in the pay of the Kremlin.

The idea that people can’t simply love Russia, and want to, for example, wave a Russian flag, without any political message being attached to it is incredibly bigoted, as is the idea that a person can’t become a Russophile, or agree with Russia of their own informed, ethical mind, without being labeled an idiot or a propagandist.

Officially, this is all about doping, but it seems the elephant in the room is no one really cares about that, the real matter is the political conflict the Deep State is waging against Russia. Kind of strange they claim it has nothing to do with politics, yet they consider the mere presence of the Russian flag to be a political protest. It’s almost like they’re massive hypocrites with a Russophobic agenda…