The Duran’s Alex Christoforou and Editor-in-Chief Alexander Mercouris discuss the recent press conference given by Saudi Arabia where the Kingdom revealed “evidence” that the Aramco attacks were “unquestionably sponsored” by Iran.

Fallout from Saudi Arabia’s ability to defend their most prized asset now has MbS considering a push back of Aramco’s flotation as investors now question the safety of the oil facilities being offered in the flotation.

Though it appears President Trump has already signaled that war with Iran has been averted for now, instead opting to kick the can further down the road with a just announced measure to “substantially increase” sanctions on the Islamic Republic, Saudi Arabia has unveiled the long awaited “evidence” of Iran’s alleged involvement in the Aramco attacks.

On Wednesday the Saudi Defense Ministry held a press conference showing the debris gathered from the weapons used in the twin attacks on the Aramco facilities early Saturday, which Riyadh has indicated involved a mix of missiles and drones.

Showcased among the debris can be seen what looks like a ballistic missile, among multiple smaller drones, including according to the statements: 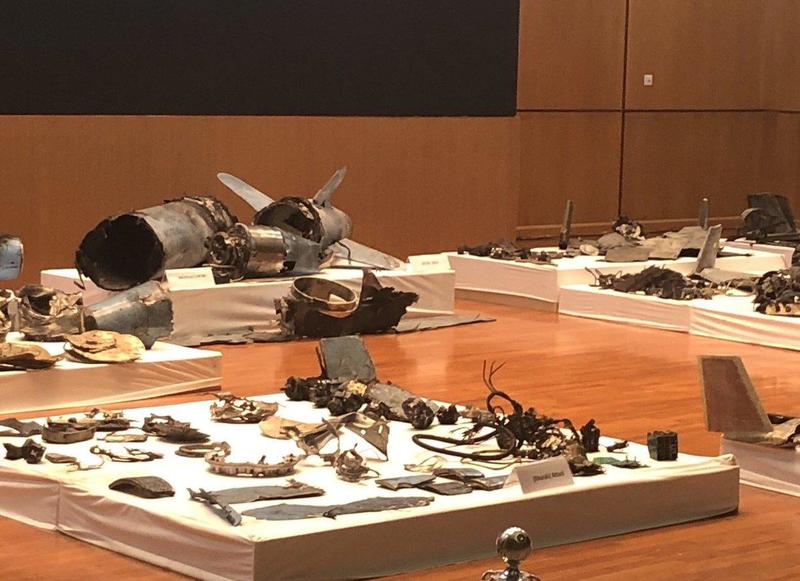 Laid out on the tables at the press event were what appeared to be sophisticated small unmanned aerial vehicles (UAVs), which a Saudi spokesman said “unquestionably” had Iranian state sponsorship.

The defense ministry spokesman further said the UAVs came from the north to the south, suggesting attack origins from Iranian soil, which contradicts accounts in a prior WSJ report which said no UAVs were spotted crossing the border.

However, some analysts were quick to point out that the Saudi spokesman stopped short of any direct statements alleging the attacks originated from within Iran or that the IRGC Quds force was behind it.

Remains of the missiles which #KSA says were used to attack an @Saudi_Aramco facility displayed during a news conference in Riyadh. (@REUTERS photo by Hamad I Mohammed) pic.twitter.com/yTGgUrV5sD

Notably, the Saudi spokesman said that Aramco attacks “could not have been launched from Yemen” but didn’t name precisely where they were launched from.

Yemen’s Houthis have been unwavering in their insistence that they conducted the attack with ten drones; however, if the cruise missile debris was in fact part of the attack this could contradict the claims of an exclusively Houthi operation.

"sponsored" by Iran and "came from Iran" seem quite different https://t.co/S6HnbAnrRa

If this is indeed the sum total of “evidence” of Iranian involvement, this whole crisis week of escalation could fizzle down to a low simmer instead of the massive bang that many were expecting in the gulf.

President Trump’s Administration has confronted the Iranian regime's and terrorist organizations aggression in an unprecedented way – we in KSA thank the President for his stance, we will continue to stand with the USA against the forces of evil and senseless aggression.

Of course, the elephant in the room at the press conference remains the question of why the kingdom’s advanced US-supplied anti air defenses were apparently incapable of intercepting the inbound projectiles and UAVs?

“Of course, the elephant in the room at the press conference remains the question of why the kingdom’s advanced US-supplied anti air defenses were apparently incapable of intercepting the inbound projectiles and UAVs?”

Why? Because seppo “weaponry” is designed primarily TO MAKE PROFIT. None of it is designed for DEFENCE. It is only designed to make seppo arms makers RICH!

Heads in the Sand
Reply to  BobValdez

Too be honest, Yugoslavia had better success with an SA-3 and inflatable tank decoys than that bunch of losers.

Also, the drones were flying very slowly. A flying shotgun could have taken them out. Russia has anticipated this problem.

To be honest, they did try to take over the drones like the Iranians do but with US high tech stuff but only managed to send a Lamborghini careening into a sand dune. Luckily, no camels were hurt.

Surrealism is the New Reality

Quote: “…………..which Riyadh has indicated involved a mix of missiles and drones.”

Kind of reminds me of Washington’s all-to-usual fare, consisting of a mix of lies and fabrications.

Sometimes a cigar is just a cigar. My view is that it was the Houthis. The Houthis may have gotten plans from Iran (even perhaps Hezbollah) for these drones but I wouldn’t disparage Houthi innovation and capabilities in designing and constructing this type of equipment. The fine points of the operation (did the drones have control passed on along the flight path or at the end to local agents, etc. ?) have many possibilities. As for picking this facility, it just seems to me to be the logical step after the pipeline attack a while back. Maybe Iran was informed… Read more »

If it turns out the drones used Glonass and not GPS, to be sure…Pompey will be blaming the Russians next week and the Graham Cracker will be calling to bomb Chinese embassies in Moscow.

And the Saudis use US and UK serial numbers when they use weapons against other countries and use these weapons to arm their terrorist cells. I hope Iran IS behind them on this. It sends a clear message that they’re a force to be reckoned with; and that they can obliterate Saudi Arabia’s refineries and infrastructure if the B-Team doesn’t back off.

Was there ever any doubt about their ability to turn SA into a blazing inferno? After all, SA is just an oversized firecracker masquerading as a country.

Iranian drone swarms on the Saudis have been discussed in the Bible as locust plagues sent from a vengeful God. Check it out. (send me a check and I’ll even tell you how to prepare).

Words have Meaning
Reply to  Guy

Saudi ‘spokesman’…LOL. He’s just another spoke in the PNAC pinwheel.

They took their time raiding the fake evidence room for objects to display. They cannot be serious that it will fool anyone……….

Iran may have been ‘involved’ in that Iranian intelligence knew what was being planned and did nothing to stop it. Houthis might have been allowed to take part so they could say they did it If Iranian intelligence knew, I expect Saudi intelligence did too. The Saudis are desperate for higher oil prices. They might also have wanted to demonstrate the uselessness of American defence systems so they don’t have to buy any more. It’s true the Aramco sale would be affected, but there was already a serious problem with that. Investors want to know the true size of Saudi… Read more »

Have Bonesaw, Will Travel

Why is this MBS character still breathing?

The AbScam Yacht Club
Reply to  Have Bonesaw, Will Travel

Because we abscammed the POTUS

My guess is that all the Saudi air defense was directed against Iran, which lies opposite Yemen. Since the drones didn’t come from Iran, the interceptor systems couldn’t see them. As an other author pointed out, the US has one of its fleets in Bahrain and their systems would certainly have picked up drones coming from Iran. Which must mean none did come from there. But it is possible that the drones and cruise missile came from Israel as an increasingly desperate attempt by Netanyahu in crisis mode due to imminent election loss when the strikes took place, plus Bolton… Read more »

Anyone who thinks the Saudi’s will share the (oil) wealth in a public corporation is a fool. They will take your money and you will get the shaft. Fools and their money are quickly parted.