MBS is on the ropes as his vicious war in Yemen is imploding, with more attacks on Saudi Arabia and its infrastructure inevitable, unless he can agree to stop the war against Houthi rebels and find common ground with historic enemies in his middle east neighborhood.

Never underestimate the power of blowback. Right now, Crown Prince Mohammad bin Salman (MBS), the de facto ruler of the House of Saud, is staring at it, an ominous abyss opened by the Houthis in Yemen.

This was part of the significantly named Operation Nasrallah in Najran province, Saudi Arabia. The Houthis, who did learn a lot, tactically and strategically, from Hezbollah, duly praised mujahideen and ‘popular committees’ involved in Operation Nasrallah.

Col. Pat Lang, in his blog, offers a particularly useful observation on the captured Saudi vehicles. Some belonged to the Saudi National Guard (SANG): “I suppose these troops were from the modernized SANG that the US has worked hard to train and equip for fifty years or more. The easy surrender of these Bedouins is very bad news for the Saudi monarchy.”

Najran, the site of the successful raid, is a Shi’ite majority province. But unlike the Eastern province, concentrating the bulk of the Saudi oil industry, where the Shi’ites are Twelvers – believers in twelve divinely ordained leaders, awaiting the reappearance of the last of those twelve imams as the promised Mahdi – in Najran the majority are Ismailis. Until recently, they had been relatively accommodating to the rabidly anti-Shi’ite House of Saud.

Not anymore. As I reported before, increasingly daring Houthi operations inside Saudi Arabia can only be successful with solid, on-the-ground intelligence.

As for the captured, ragged Saudi soldiers, Mohamed Al-Bukhaiti, who is part of Ansarallah’s political wing, confirms they are mostly takfiris – true believers who think they see among their fellow Muslims legions of apostates, deserving of the death penalty – and jihadis. 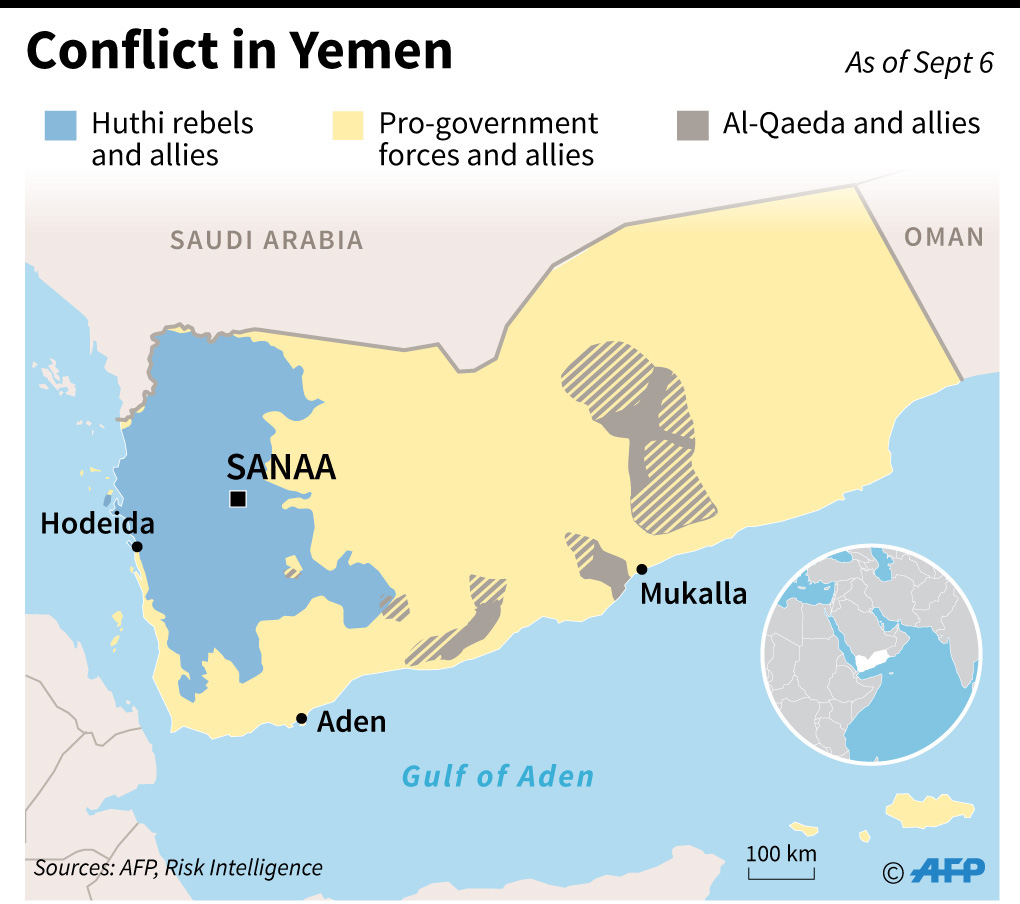 What MBZ is up to

Al-Emad was keen to point out that among the dizzyingly complex Yemeni tribal mosaic, the only unifying factor is the fight against a foreign invader – and in this case serial bomber, responsible since 2015 for provoking the most serious humanitarian crisis in the world according to the UN. I remarked to Al-Emad that the Yemeni tribal pattern was much like Afghanistan’s. He visibly enjoyed the comparison.

Al-Emad also confirmed that mercenaries fighting in south Yemen are joining the Houthi movement en masse. That will pose even more challenges for the so-called “coalition” that’s been bombing Yemen since 2015, which is now reduced to the House of Saud after the UAE opted for “talks.”

On the ground, the situation is actually even murkier. The Houthis – supported by Iran – may be fighting Riyadh, but they are also fighting al-Qaeda remnants and a few Daesh jihadis. The House of Saud creates the illusion they are doing the same. In fact, they do nothing.

Additionally, the Houthis are also fighting the Southern Transitional Council, formed only two years ago. This is a separatist outfit that wants an independent South Yemen. Yet the STC is most of all a UAE fifth column, funded and weaponized by Abu Dhabi.

So what is Abu Dhabi supremo Mohammed Bin Zayed (MBZ), MBS’s mentor, really up to in Yemen? Follow the (oil) money. What really matters is full control of the immensely strategic Bab-el-Mandeb strait connecting the Red Sea to the Gulf of Aden. It’s all about oil trade and connectivity. China, with a base in nearby Djibouti, is paying enormous attention to what’s happening in Aden and south Yemen.

Meanwhile, Yemen’s “government,” led by President Abd Rabbu Mansour Hadi, remains an inefficient fiction. Basically the only thing Hadi does is to support the Southern Transitional Council to fight the Houthis.

Enter yet another, fascinating oil angle. Hadi is actually moving his operation to mythical Ma’arib – the fabled capital of Bilqis, the Queen of Sheba.

Much like Freud comparing the layers of the unconscious to the layers of Roman ruins, there are myriad, superimposed Ma’aribs in Yemen’s extraordinary history. Ma’arib was the original capital of Arabia Felix, praised by eminent historians such as Strabo and Diodorus Siculus, a city sending a thousand talents of incense to Babylon every twelve moons for the feast of Baal or selling ivory, gold and leopard skins to the caravans of Hatshepsut, the Queen of Egypt.

Ma’arib’s gaze is fixed on the Rub al-Khali, the Great Desert Void, dreaming of a new Arabian Empire – certainly not ruled by the shabby, corrupt, supremely ignorant House of Saud. Enter, again, the UAE angle.

Ma’arib happens to be the land of origin of Sheikh Zayed, MBZ’s father. That’s where his tribe departed from. In the 1970s, Sheikh Zayed was actually financing an army of archeologists and agricultural engineers involved in the rebirth of Ma’arib. Today, as the hidden power behind governor Sultan al-Aradah, his son MBZ would like to control it to perhaps fulfill Daddy’s dream. The problem is, the Houthis will never let him.

The desert holds all secrets

Trying to decode the Yemeni puzzle is like being immersed in a Jorge Luis Borges labyrinth of mirrors. Actually a pyramid of mirrors. In Beirut, I had the privilege of sharing countless stories with my friend Princess Vittoria Alliata from Sicily, the epitome of cool aristocracy, a renowned Islamologist and the first Italian translator of Lord of the Rings (Tolkien absolutely loved it).

Vittoria, who translated our conversations with al-Emad, graciously gave me one of the few remaining copies of the 1980 first edition by Garzanti of her spellbinding Harem, a study of women in the Arab world in the form of travel memories. In it, I found this immaculately Borgesian passage by Hasan ibn Ahmad al-Hamdani, written way back in 935 AD in Sana’a:

“In the sands of the desert is buried an upside-down pyramid; it contains the truth of the human race. Truth is buried in the desert sands, so the one who by chance discovers it shall be regarded by men as a madman with his brains burned by solitude and the sun.”

The fact that the barbarians of the House of Saud are aiming to destroy Arabia Felix – the seat of a fabulous, millennia-old desert civilization and store of knowledge – speaks volumes about our tawdry times. True Yemenis see right through it.

In more prosaic terms, after the spectacular, game-changing attack on Abqaiq, the Houthi movement, via President of Yemen’s Supreme Political Council Mahdi al-Mashat, offered a ceasefire to MBS. His entourage only accepted a “partial” stop to the relentless bombing campaign. So more daring operations, complete with drone swarms and Quds-1 missiles, are inevitable. As Bukhaiti remarked, they “will target more vital and critical facilities of Saudis.”

A taste of what is in store was the fire on Jeddah’s train station – which is the $7 billion-plus hub of MBS’s 300km high-speed rail link to Mecca and Medina. The Arab street is consumed by rumors that the Houthis won’t stop before they reach Mecca.

As for the capabilities of the Yemeni Quds-1 cruise missile, here is a superb technical analysis, which comes with a crucial insight in view of the UK, German and French claims that Iran is behind the Saudi oil attacks: “Notably, the Pentagon has not accused Iran of the strike and is keeping quiet, knowing full well that the Quds cruise missile came from Houthi territory.”

After Abqaiq and Operation Nasrallah, to say that MBS is wallowing in a vicious blowback swamp is an understatement. The relentless bombing of Yemen for over four years during his term as minister of defense is his Frankenstein baby.

In Beirut, I also spent many hours discussing the internal Saudi quagmire with analysts of the organized opposition, who run the website The Saudi Reality.

Among other things, they said that Jamal Khashoggi was killed because the Saudi consul in Istanbul exaggerated the dose of the shot to paralyze him. Then he was bone-sawed and the body was burned – so no wonder it was never found.

The opposition sees the internal Saudi dynamics as MBS being Trump’s man in Riyadh – because of the oil angle – while the CIA, like Khashoggi, would rather deal with a constitutional monarchy and have its own asset in command.

Total instability reigns. The only certainty is that the Houthi movement’s increasingly sophisticated offensive will continue to be deployed inside Saudi Arabia, unless MBS shelves his vicious war. Otherwise, he’d better start booking a one-way ticket to London.

Here is an article that looks at the sources of Saudi Arabia’s weapons and how much the Saudi royal family spends on its military:

One has to wonder how the sales of American arms has affected the balance of power in the Middle East, particularly when these arms are being sold to a nation with a poor human rights record.

I was reading to find out what sort of tactical ‘pivot’ was being made follow the blowing up of the oil producing facility by Houthi. So apart from mdz wanting to achieve the objectives of his father in ma’arib there is nothing that touches on mbz’s tactical (or other) pivot. Interesting read all the same