WikiLeaks has published an urgent statement to its official social media accounts, saying the Ecuadorian embassy in London is preparing to expel Julian Assange within “hours to days,” citing two “high level” Ecuadorian sources, and that the South American country “already has an agreement with the UK for his arrest.”

The statement published Thursday night grabbed headlines in US and UK press, with WikiLeaks supporters calling on crowds to gather outside the embassy in solidarity with Assange.

WikiLeaks said via Twitter, A high level source within the Ecuadorian state has told WikiLeaks that Julian Assange will be expelled within “hours to days” using the INA Papers offshore scandal as a pretext — and that it already has an agreement with the UK for his arrest.

BREAKING: A high level source within the Ecuadorian state has told @WikiLeaks that Julian Assange will be expelled within "hours to days" using the #INAPapers offshore scandal as a pretext–and that it already has an agreement with the UK for his arrest.https://t.co/adnJph79wq

UK police and surveillance teams have been camped outside the embassy 24/7 ever since he first entered the building in 2012 and was given asylum there while facing extradition to Sweden on assault charges, which many believe was a classic “honey trap” scenario orchestrated by the CIA or another western intelligence agency, so that he could eventually be transferred to US detention.

Assange expulsion off the back of #INAPapers offshore corruption scandal: Ecuador's former Consul to London (2010-2018) analysis

"In short, the government seeks a false pretext to end the asylum and protection of Julian Assange."https://t.co/UQft7LAXHu

The corruption scandal WikiLeaks referenced involves WikiLeaks’ reporting on papers alleging that Ecuadorian president Lenín Moreno enriched himself from an offshore account in Panama — allegations which Moreno has vehemently denied.

For his part, Moreno has ramped up pressure and scrutiny on Assange this week, saying in a radio interview that the whistleblower and journalist has egregiously and repeatedly violated the terms of his asylum.

Moreno went so far as to indirectly suggest Assange and WikiLeaks leaked personal photos of him and his family online, but without directly referencing him by name.

WikiLeaks to @AP: "If President Moreno wants to illegally terminate a refugee publisher’s asylum to cover up an offshore corruption scandal, history will not be kind," https://t.co/XDKTvpRW3l

“Photos of my bedroom, what I eat and how my wife and daughters and friends dance [have circulated],” Moreno described, as reported by The Guardian.

“We should ensure Mr. Assange’s life is not at risk but he’s violated the agreement we have with him so many times,” Moreno said, according to the report.

WikiLeaks says Moreno is attempting to generate a “false pretext” and publicly justifiable excuse on the back of the INA Papers scandal for ending Assange’s asylum on the legal technicality that “conditions” have been broken.

However, once off embassy grounds there’s no telling what Assange would eventually face — though his immediate arrest by UK authorities for skipping his bail years ago is certain.

WikiLeaks reminded followers that Chelsea Manning is still in US custody after returning to prison a month ago: “US whistleblower Chelsea Manning, who the US government re-jailed a month ago to coerce her into a secret interrogation, as part of government efforts to prosecute WikiLeaks, was moved out of solitary after filing appeals case,”  WikiLeaks stated.

And while we’ve heard ‘days if not hours’ before in terms of Assange’s pending expulsion from the embassy, the combination of WikiLeaks’ ‘high level source’ and Moreno’s motive suggests it’s actually happening this time.

Documenting the scene outside of the embassy is Ruptly with a livestream.

Just remember the following are now US puppets – Chile, Brazil, Colombia, Argentina, Paraguay, Ecuador, Peru, and Guyana ……. so Uk arrest and export to the US.

Platon
Reply to  You can call me AL

And do not forget the puppets of Israel, the ‘Five Eyes’ –
Canada, UK, New Zealand, Aus AND the USA.
Puppets are now running a lot of the puppet show.
The Finale should be very interesting.

Now that Russia gate is shown to be a contrivance of the DNC and CIA to sabotage the Trump Administration, an investigation into the actual traitors of of the Russia gate plotters is about to begin. Julian Assange could prove to be a valuable source of information on this investigation. Hopefully, President Trump will realize this and prevent his execution on trumped up “National Security” charges. 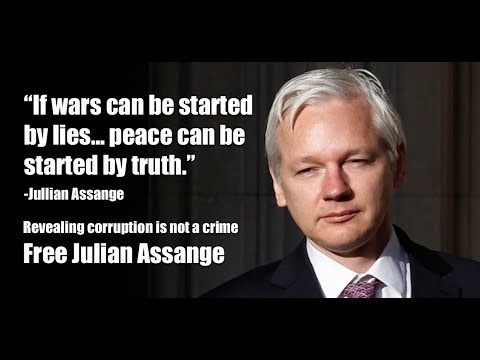 Please, all you Brits & all people in the immediate vicinity, sick of being ruled by these psychopaths in our western Governments, get out to the Ecuadorean embassy & support this man.

Assange has committed no crimes whatsoever. Yet Hilary Clinton, never known for discretion or intelligence, actually blurted out the reason that the Pirate Regime of Barataria (formerly known as Washington) needs to make an example of Assange, and, what his ‘crime’ is. She said, when calling for his summary death-by-droning, I believe: “He [Assange] has insulted the International Class.” In other words, his crime is what in the worst Autocratic, Monarchical Systems was called, ‘lese majeste'(Slight to the King or Queen). Welcome back to the past! But with this difference; instead of people bred for the role and so rich… Read more »

Absolute proof that the “truth” will get you killed !!!

See also: “An Open Letter to Prime Minister Scott Morrison: Please use the powers vested in you to end Julian Assange’s cruel ordeal” (7/4/19) at https://candobetter.net/node/5742