It is a nasty thing to get political about matters that involve the loss of life of children. The United States, and indeed, many people from the rest of the world who observed the news of the horrific school massacre in Florida not two weeks ago, all are shocked and horrified. Even for staunch supporters of the Second Amendment’s right to keep and bear arms, there seems to be something about this matter that has gotten attention in a way not seen in previous occurrences.

Why this is so is unclear, but that, too has led to some speculation that political activism has seized on this tragedy to advance a leftist cause, that cause being some sort of change regarding guns. What that change actually is supposed to be is less than clear.

President Donald Trump has really handled this in a masterful way thus far. First, he went to Florida to thank the people involved in responding to the shooting. Then he had the students and families up to the White House for a listening session, where he could hear, first hand, what the students and parents have to say about this. He has expressed openness to doing something, and he started with signing an order to make “bump stocks” illegal.

(A bump stock is an add-on device to the stock of a semi-automatic weapon, such as the vilified AR-15, that allows it to act much more “automatic” by using the guns own recoil to load the next round. This device was used in the awful Las Vegas massacre.)

However, the President is honest enough to know that this is not the “fix” for the problem. But what more needs to be done is unclear, and so proposals, even highly criticized ones, like arming teachers or having US military veterans guard schools, are all being fielded at this time. 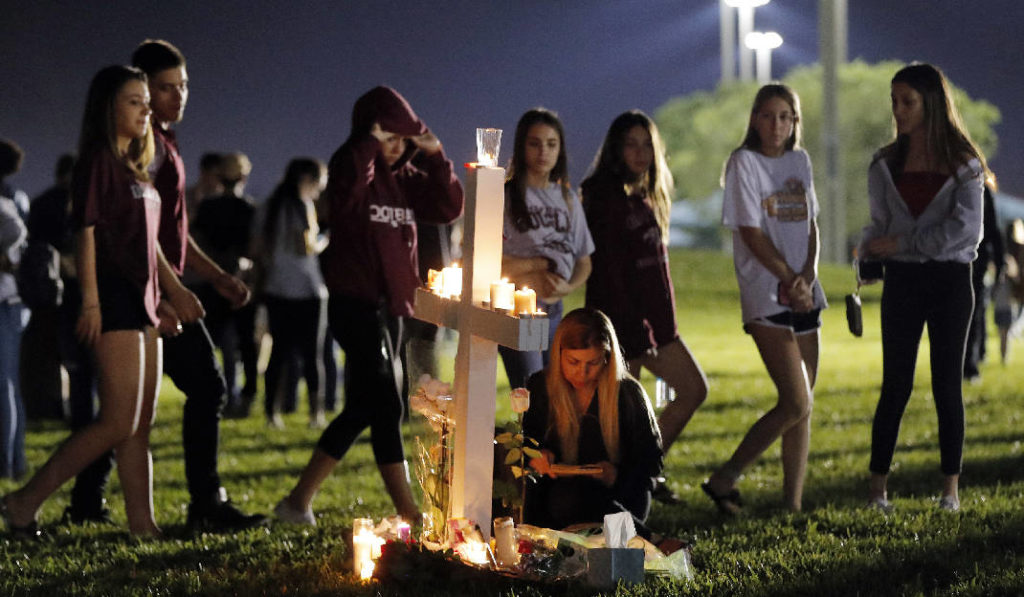 This event has brought on a very emotional activist movement. It is a little difficult to trust that it is so organic as it appears, because there is a great deal of organized and frankly disruptive action that makes the movement appear more like a post-Ferguson riot than a dignified statement.

Maybe this is because we have lost the ability as a nation to make dignified statements, or maybe it is really that a tipping point has been reached that says that something very significant must change, even to having an honest and fearless look at the Second Amendment itself.

In the New York Post’s “Opinion” section, retired Lieutenant Colonel Ralph Peters gives his take on the matter of “assault weapons” and why he believes they should be banned. Col. Peters’ take is “tuned” in his piece by his own recollection as a military man, using all sorts of weapons to do the job that military men and women do – kill people and break things. He did this as well as any soldier should, of course. His take is that private citizens should have no need of either automatic or semi-automatic weapons that can be modified for automatic effects. His reference to the Second Amendment is interesting, in that he points out that the whole text of the Amendment is not often considered. That text is:

“A well regulated militia being necessary to the security of a free State, the right of the people to keep and bear arms shall not be infringed.”

The italicized phrase is the part he points out – as Peters believes the support of a militia is what is needed, and that this is why people should have the right to keep and bear arms.

But here is where he seems to depart from the truth of this matter. He goes on to say that the militia referred to is the “Reserves” or the “National Guard.” This statement is fraught with peril, for these two groups are branches of the US Military. They are not militia. Militia is defined as “a military force that is raised from the civil population to supplement a regular army in an emergency.” But it is also defined as “a military force that engages in rebel or terrorist activities, typically in opposition to a regular army.”

While we may flinch at the word terrorist, let’s look at the American Revolution from the perspective of the Redcoats between 1765 and 1783. Militia did supplement the Continental Army of the colonies, but they acted as modern day guerilla fighters and terrorists might be accused of. And further, the argument of the framers of the Constitution upheld the idea that this ability to allow Americans to keep and bear arms was in case of a tyrannical government arising in the US, which would probably make use of the standing and reservist military forces to control the populace:

It may well be doubted, whether a militia thus circumstanced could ever be conquered by such a proportion of regular troops. Those who are best acquainted with the last successful resistance of this country against the British arms, will be most inclined to deny the possibility of it. Besides the advantage of being armed, which the Americans possess over the people of almost every other nation, the existence of subordinate governments, to which the people are attached, and by which the militia officers are appointed, forms a barrier against the enterprises of ambition, more insurmountable than any which a simple government of any form can admit of. [James Madison, c.f. Federalist 46]

And this sentiment was further amplified by Alexander Hamilton:

If circumstances should at any time oblige the government to form an army of any magnitude that army can never be formidable to the liberties of the people while there is a large body of citizens, little, if at all, inferior to them in discipline and the use of arms, who stand ready to defend their own rights and those of their fellow-citizens. This appears to me the only substitute that can be devised for a standing army, and the best possible security against it, if it should exist. [Federalist 29]

The context of the times further lends witness to the thoughts of these two men. During President Obama’s time, many people in the USA were afraid of the government trying to seize total control of the populace, and so “preppers” abounded througout the USA. Many very reasonable people believed that Obama was the kiss of death to the Republic. Those same people do not think the same way about President Trump, and no doubt, based on Col. Peter’s other opinion pieces, he is a big Trump fan.

So, then, why the odd stance on gun control?

The simplest answer to this is that there is no answer that has really made itself clear for this problem. Part of this lies in the extreme emotion this time around, which is absolutely justified. But any wise person knows that it is not a good idea to make snap decisions based on anger, or fear. And right now, the expression of many who are speaking out in the US is an expression of anger, fear, terrible grief and sadness.

Again, all of these ARE justified. But activists on any side of this issue, whether advocating for more guns in more people’s hands, such as teachers and veterans patrolling schools, or fewer to no guns, as in changing the Second Amendment – both sides are attempting once again to play on emotion to make a decision that could endanger many more people.

While the students have walkouts demanding “Change!” I do not think they themselves know or agree on what that change should be, and what is worse, the fact that they are young and easily impressionable by those with carefully crafted emotion-grabbing lines means they are susceptible to being terribly misled. The final thought on this comes from the observation of the news on the school walkouts, with the headlines like “Mass. Students Are Organizing Walkouts, Calling for Change in Gun Laws“, or “Students Take Charge of Gun-safety Movement with Some Help from Existing Groups.”

A right analysis of these headlines should honestly read “Activists Take Advantage of Student Imagery to Promote X”, and X seems to mean something against that Second Amendment most of the time.

The most overt example of this of course happened with the help of CNN on Wednesday Night at a network-hosted “town hall” event that was hosted by Jake Tapper. A young student who survived the shooting was given a scripted question for him to ask in the event, and told to stick to that script. He appeared on Fox News to talk about this, but this is likely not the only incidence of this. Further, the town hall directly played on the emotion of the parents and kids to play the nation who viewed it, and although there were some revealing moments, this program was exploiting the crisis in classic fashion.

Young people are the future of our nation. But when they are used by ANYONE to promote some political point, especially when they are used at the time they are most vulnerable, such as now, is reprehensible. It seems very wrong when children are put “in control” and it is illogical and unsound, theatrical though it may be. It is also a sad sign of the sickness which continues to assail American society, that the adults in the room are nary to be found, except for maybe one or two.