Contemporary events have made cultural dialogue between the Christian world, secular world and wider Islamic world, undeniably crucial. Although there ought to be many points of cultural contact between such societies, one of the most immovable and consequently noticeable art forms that ought to be considered as a primary source of contact, is architecture.

Prior to the 20th century, architecture was typically a localised, regional or national phenomenon. Prior to the consecration of modernism, architecture denoted a combination of structural necessities preconditioned by local climates as well as the normative cultural imperatives of a particular society. This obviously evolved over time, but nevertheless, one could see a photograph of even a fairly generic piece of architecture and a moderately well-travelled individual could name the culture from whence such an edifice derived.

The dawning of modernism changed this not only in architecture, but in other art forms. Western orchestral music in particular lost its national characteristics which defined it in the 19th century. It became part of a wider international movement that replaced traditional harmonies with dissonant tones, but also one that replaced instrumental cultural poetry with either formalist experiments in sonic virtuosity or didactic works designed to propagate new internationally minded philosophies ranging from Communism to Futurism.

As architecture became internationalised (not that the ‘International Style’ was a giveaway), it held, as it still holds, the potential to offer cross-cultural symbiosis in ways that older styles of architecture determined by specific needs to reflect a particular culture, could not do.

Whilst Brutalism traces its origins to Western Europe, in many ways, it is less understood and appreciated in the west than it is outside of the west, in this case west is used to denote most of Western Europe and North America.

Much of classical European architecture was inspired by the idolatry of Roman Catholicism. This is most certainly true of the Baroque, elements of the Rococo and by the neo-classicism that was co-opted by the Catholic Church, most poignantly in the Vatican.

By contrast, Brutalism is monumental in its scope, its narrative and in its iconoclasm. Whereas neo-classical architecture is a kind of jigsaw puzzle of various didactic and illustrative pieces, Brutalist architecture explores the unitary notion of infinity by creating buildings whose heterodox angles intersect to form a singular monolithic piece of geometry; a singular statement.

On the one hand, the asymmetry of many Brutalist buildings reflects an age old concept that the hand of man is engaged in an exercise of arrogance when attempting to duplicate the symmetry that only a deity is capable of configuring. At the same time, the messages of communitarianism, of the inorganic interacting with the natural whilst clearly delineating the hand of humans vis-à-vis that of the organic, sends a message that man’s work can praise the divine without attempting to portray a godly figure nor copy the imagery implied in liturgical verses.

It is for this reason that Brutalist architecture has flourished most profoundly in revolutionary Communist countries, Islamic countries and countries looking to assert a post-colonial identity.

One of the most impressive brutalist buildings in the world is Louis Kahn’s National Assembly building in Dhaka. Although plans for the building begun when Bangladesh was known as East Pakistan, after independence was declared in 1971, the project became more radical in nature. The building became symbolic of the fact that not only was Bangladesh free of colonial rule from London, but also free of its regional overlord in Islamabad. Kahn’s bold statement was at once modern, unrelenting and mighty whilst it also subtly paid homage to ancient trends in Islamic architecture. Gone were the trappings of neo-colonial classicism, this was a modern building which shunned idolatry in the name of an emergent self-governing Islamic state in Asia. Turning back to Pakistan, the Habib Bank Plaza building in Karachi is another example of the spiritual monumentality of Brutalism. Once the tallest building in all of Asia, the building is a clear break from the past, totally rejecting the neo-classicism of the Bank of England building or American Federal Reserve. Interestingly, it was designed by American architect Leo A. Daly. Louis Khan likewise, worked for most of his career in the United States.

Whilst Brutalism in the Islamic world is consistent with iconoclastic aesthetics demanded of believers by sacred texts, in the Communist world, Brutalism has come to represent a rejection of royalism, aristocracy and the old social order.

Brutalism, in rejecting unnecessary ornate accoutrements and replacing them with a style where form, shape, texture and purpose are united, symbolises the collective values of Marxist-Leninist communism. Brutalism’s optimistic view of a future is guided by reason and a Marxist understanding of materialism, rather than a blind adherence to the superstitions and opulence of the past. Soviet government buildings like the George Chakhava and Zurab Jalaghania designed Ministry of Highways in Tbilisi reflect this optimistic spirit. 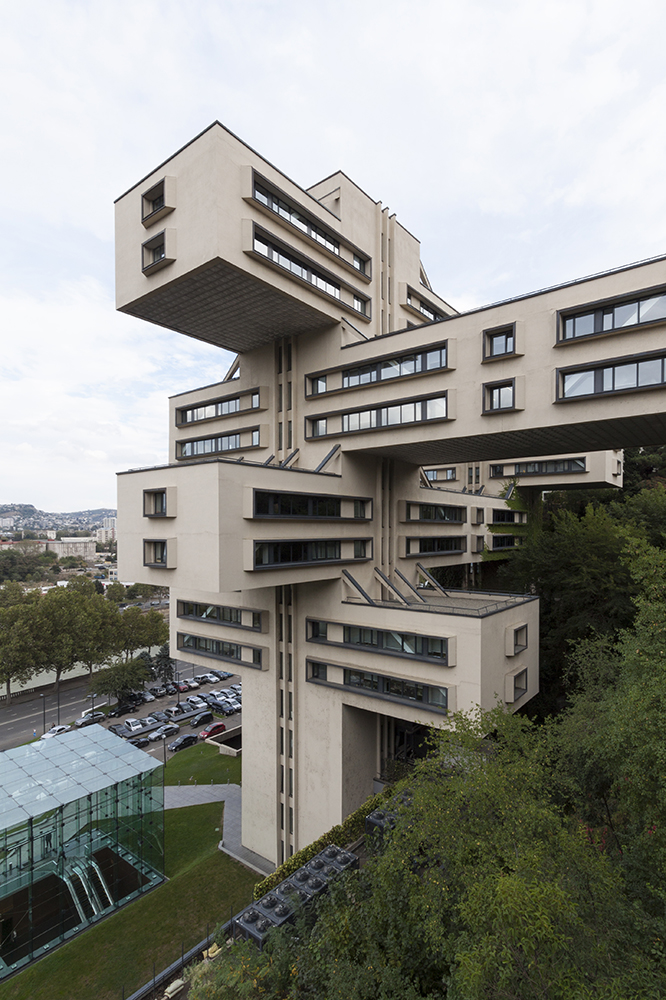 In Leningrad, now St. Petersburg (again), the Russian State Scientific Centre for Robotics and Technical Cybernetics is unambiguous in its desire to portray the scientific achievements of Communism. In this sense, the cosmos plays an important social role in Brutalism whether in the context of religious interpretations of the heavens or in secular/atheistic interpretations.

But it wasn’t only functional buildings in the communist world that employed Brutalism. In The Socialist Federal Republic of Yugoslavia, Josip Broz Tito commissioned a series of monuments or Spomenik throughout the republics of Yugoslavia. The brutalist inspired sculptures were designed to symbolise both the triumph of Yugoslav partisans against fascist forces during the 1940s and commemorate the triumph of socialism over nationalism and the independence of Yugoslavia and her ‘third way’ interpretation of socialism.

The fact that many of the Spomenik stand in disrepair, is analogous to the destruction of Yugoslavia and the dream of socialist unity that it came to represent for the region.

One doesn’t need, however to turn to the Communist world to see Brutalist inspired architecture symbolising a break from the past. In Brasilia, Oscar Niemeyer’s buildings represented a modern Brazilian renaissance in a new city designed to break fully with a colonial past which has caused many an identity crisis throughout Latin America. Niemeyer’s works in Brasilia are best described as a syncretic style blending elements of Brutalism with those of Neo-Formalism. By choosing to build a new capital city, incorporating Niemeyer’s architectural designs, Brazil has successfully created a global image and indeed brand whereby, the buildings of Niemeyer have come to encapsulate the modern Brazilian identity that is unmistakable in both the region and the world.

Brutalism and its offshoots remain an important line of communication between western modernism and the contemporary culture requirements of non-western societies. Brutalism is a style which helps communicate social solidarity, respectful iconoclastic reverence for the divine and the assertion of cultural autonomy from old masters.

If this message could be more widely understood and promulgated, perhaps fewer buildings would be destroyed by war and more could be erected in a spirit of mutual understanding and respect.