Over this weekend, news has been emerging of a united and hardening position of all branches of US Government, including the White House, stridently speaking out against Haftar’s efforts to take militarily Tripoli.

Aggravating the overall situation has been, what many judge to be ill timed, a threat by one of the sons of Haftar, delivered personally last week in Washington to the powers that be, that his father will stop all oil revenues reaching the ‘GNA Government’ of Serraj. If that was designed to persuade the US Administration to back his father, it seems to have backfired.

Haftar relies, some say too much, on his sons: Khalid, the commander of the 106th brigade, Saddam, captain of the LNA and Belqassem, who acts in the diplomatic arena, lobbying for his father’s interests in the United States. He lives in Virginia. 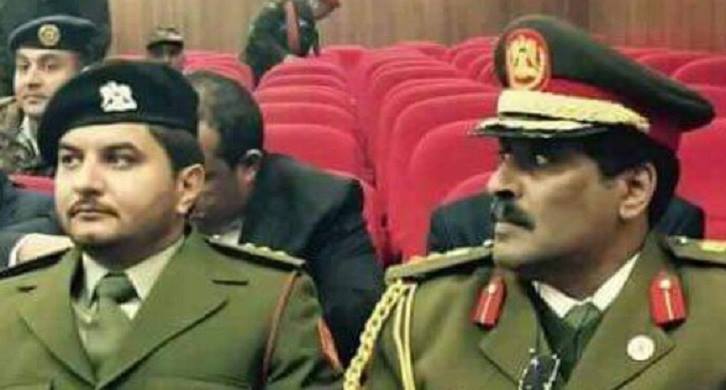 Two sons (above) of Khalifa Haftar, Saddam and Khalid, received military ranks despite being civilian individuals without any prior involvement in military academies or institutions. There is no available picture of the other important son, Belqassem.

To add even more confusion to the situation in Libya, it was reported but not confirmed true, that Haftar met President Putin in Moscow Friday, 31st May. A picture evidencing such a meeting would have emerged by now, if it indeed it occurred. It therefore appears to have been disinformation from the Haftar camp.

Meanwhile, the Tripoli GNA Prime Minister Fayez Al-Sarraj is said to have met also that Friday with the Saudi Crown Prince Mohammed bin Salman (MBS) during the summit in Riyadh of the Organisation of Islamic Cooperation (OIC).

MBS allegedly said there is no military solution to Libya’s crisis and that Saudi Arabia is ready to play a role in Libya and help support a national initiative that represents all Libyans.

An important question is whether the most important supporter of Haftar, Crown Prince of the UAE, Sheikh Mohammed bin Zayed Al Nahyan (MBZ) is in agreement with his counterpart in Saudi, MBS?

It appears that Russian policy is crystallising to one of non-action and non-alignment with any Libyan side.

It is much more effective for Russia to observe how western countries are trying to overcome the crisis, which they created. For the situation to remain in the interests of Moscow, non intervention nor condoning of any military operations is a wise move. It is enough that Russia watch and not interfere in Libya.

The US and its allies seem to again be further embroiling themselves in Libyan affairs and eventually, according to one source, “will bury themselves” in Libya, possibly creating another Iraq and Syria.

And so the proxy wars, the info-wars, the dis-information wars and the ground war (presently at a stalemate) are all in play simultaneously; in and out of Libya and especially amongst the various conflicting interests there, the competing Western and Regional powers.

I’m beginning to think that every new POTUS’ first order of business is to put back the toothpaste into the tube that the previous POTUS couldn’t help squeezing.