The Russian News Agency TASS reports that the plan for Russian forces in Syria in 2018 is to remove the militants who are with the group Jahbat al-Nusra. Foreign Minister Sergey Lavrov stated the following:

“A decisive blow has been dealt to the Islamic State (IS, terror group, outlawed in Russia – TASS). Although some militants who fled the battlefield are trying to either regroup in Syria or leave the country, it is clear that the main fight is over. Now, of course, the main anti-terrorist objective is the defeat of Jabhat al-Nusra,

This plan was agreed to at the Russian General Staff meeting, and announced by Army General Valery Gerasimov, on Wednesday.

In an interview with Komsomolskaya Pravda, General Gerasimov stated that the goals for next year in Syria included “the completion of eliminating militants from Jahbat al-Nusra and its affiliates.”

“Some members of this terrorist organization operate in de-escalation zones… Jabhat al-Nusra fiercely opposes [the ceasefire]. Therefore, they must be eliminated.

This presents an issue that is bigger than meets the eye, because the fact is that for several years this group has been aided by the American forces operating in the region.  The United States official stance on al-Nusra is that they are “moderate rebels”, and therefore they serve the “greater good” by being in opposition to the government headed by Syrian president Bashar al-Assad.

U.S. Secretary of State Rex Tillerson has pledged that the American mission in Syria is to root out ISIS, but as Russian foreign minister Sergey Lavrov put it, “[the American mission] is getting vaguer and vaguer.” The present understanding appears to be that these opposition forces will stay in place until the political process starts, or the process that involves the resignation of President Assad.

One of the major sticking points during the entire history of the Syrian conflict is President Assad himself.  Viewed in the West as a monster, this man is supported by the Russian Federation as the legitimate ruler of that nation, and Russia has stood by its commitment to defend its ally.

During the Syrian Civil War, the original action taking place in that country pitted the Syrian government forces against those of dissident groups in the country.  However, with the Civil war there began to occur two other wars simultaneously – a sectarian war, pitting the Alawites against the Sunni Muslims, and a proxy war pitting the Russian interests against those of the U.S.A. and the West. Enemies in one war are near-allies in another one, and all three have been taking place at once. 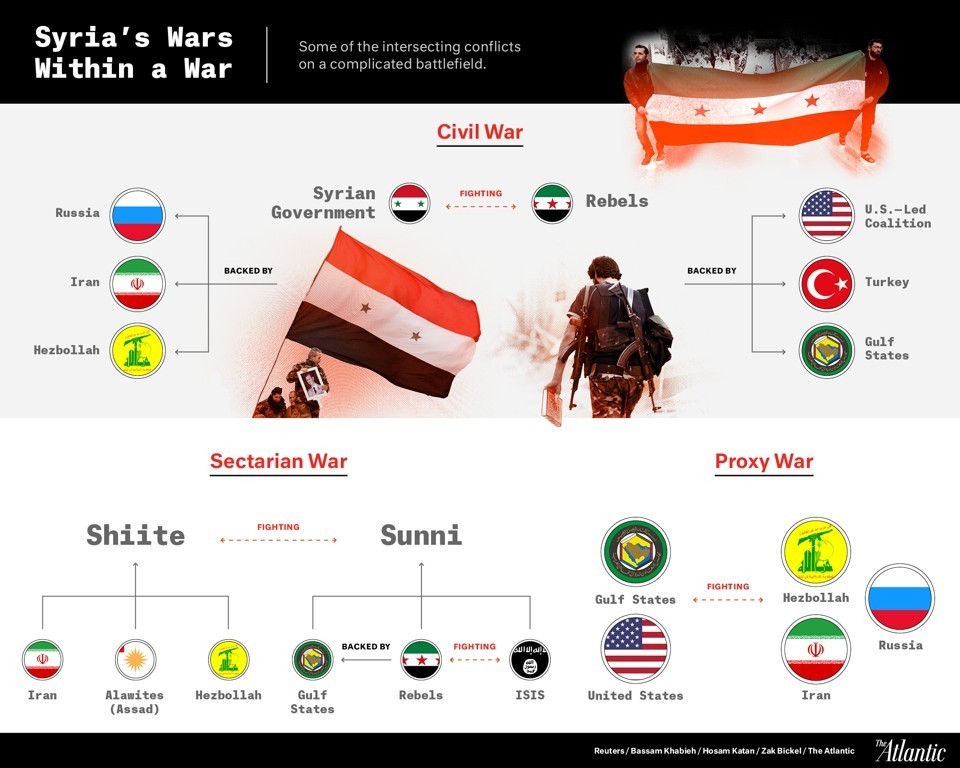 Russia’s major concerns were aligned with helping Al-Assad retain control of his government, and also towards defeating ISIS, which had become an extremely dangerous power in the region. To this extent, the action was helped by American alliances with “lesser” extreme Islamist radicals, such as al-Nusra, but we saw disturbing inconsistency.  During the Obama Administration, it became clear that the US policy towards ISIS had become to try to use this force productively to force Assad to leave power.

Because of some rather clever masking by the US media, this knowledge was reported, but in such as way that it never came clearly to light, so to this day, the average American simply thinks that the big problem in Syria is Bashar al-Assad, and that the American forces are allied with “moderate” rebels (taken to mean “good rebels”) in the region.

It comes as a surprise when they learn that the al-Nusra Front is actually al-Qaeda. Yes.  Those guys that attacked New York and Washington D.C. back in 2001.

And now, this backing of such people is running into a new problem. With ISIS rapidly falling apart, new reports, including those we have covered here, show that the former ISIS militants are now receiving training by US forces in the Idlib Province.

It seems apparent that the Americans have not yet understood that all these militants are in fact Islamic radicals, and they may be temporarily useful to the mission of getting rid of Assad, but their behavior in the past is only a sign of what is to come.

The decimation of Christian populations, whole villages, the threats against them in larger cities like Aleppo, and the behavior of ISIS through its short and violent history all point clearly at the idea that no one who thinks like these people do should be trusted as an ally.  The Russians seem to realize this as fact, and they have pledged themselves to remove the problem from the field.

Kathy Gilsinan of The Atlantic summed it up this way in her piece from 2015:

In that sense, broadly speaking, Russia has intervened on behalf of the loyalists and the United States has intervened on behalf of the rebels, though the U.S. has tried to only help certain rebels, providing arms and training to “vetted” groups. It’s this contradiction in U.S. goals—America wants Assad to go but is also fighting ISIS, one of the strongest anti-Assad forces in Syria, in defiance of “the enemy of my enemy is my friend” principle—that helps answer another reader’s question: “Why is it still so difficult to wrap my own head around our official involvement in the conflict?”

This makes a substantial problem for both the American forces on the ground, and for American foreign policy overall.  Something is going to have to give.  One hopes that the right decisions are made, but one cannot be sure of this now.  These are indeed crazy times.