Our report, ‘Syria Boils Over While Iran Heats Up’ covered the recent resurgence of Hay’at Tahrir al-Sham (HTS) in its attempt to breakout from Idlib in the north, while the National Front for Liberation (NLF) has renewed attacks near Deir Ezzor. The NLF is primarily supported by Turkey.  The renewed attacks by takfiri terror groups in the north and south have caused Russian security forces and local government forces to respond.

Commander Miraj Ural also known as Ali Kayali of the pro-government Popular Front for the Liberation of Iskenderun was seriously wounded in an attempted assassination attack on July 5th, the attack reportedly led by Captain Naji Mustafa of Ajabha Alwataniya Lil Tahrir of the NLF.

Ali Kayali is accused of war crimes, but according to local reports, Commander Ural has done much to prevent Turkish-sponsored terrorists (NLF) from maintaining their base in Latakia. While the temporary loss of Commander Ural may pose a minor setback for the Syrian government, the greater point is about the general outbreak of new hostilities in the northwest.

The concern is that HTS and NLF terror militias have been allowed to re-group and re-arm by Turkey and the United Arab Emirates, on behalf of the United States, Saudi Arabia and Israel, subsequent to an uneasy truce agreed for Idlib last year.

According to our active map, Russian and government security forces have been actively defending their positions and the populace these last few days, from Takfiri terror attacks in the northwest and south: 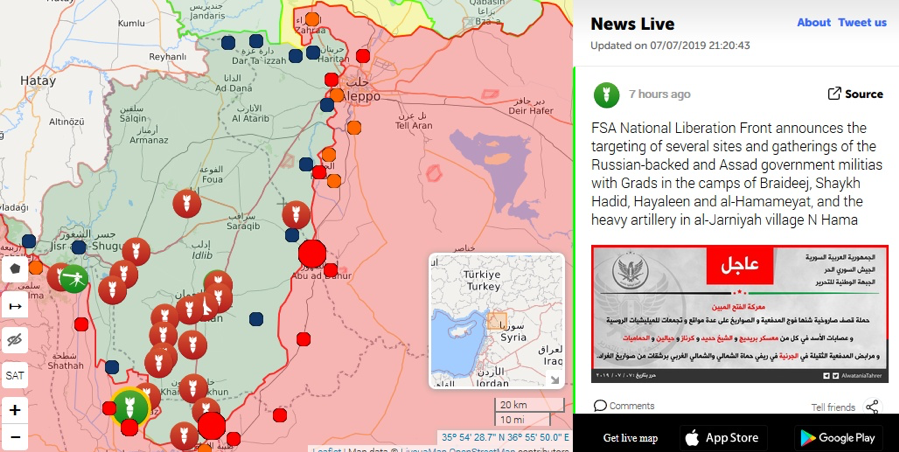 Further reports indicate that with its commitment to Misrata oil, Turkey may be over-extended, maintaining two wars on two fronts.  Since Turkey is promoting regime change in Syria — in aid of its pipeline war there — and supporting Misrata and the GNA (defacto) in Libya, Turkey is stretched economically, militarily, and to some extent politically. That’s because Turkey’s relationship with Saudi Arabia and the United States has degraded over time.

This reporter speculates that the foregoing may be why Turkey called for a summit meeting yesterday with Russia and Iran in Ankara, to take place during August, 2019.

The theory is that Washington’s inability to effectively aid Turkey in its present adventures — Turkey and the US have squabbled over US tariffs on Turkish aluminum and steel, and on weaponry — may in part cause Turkey to sue for peace. In other words, the expectation is that Turkey will withdraw from the northwest.

As an adjunct to that, there is the definite prospect that Erdogan is losing popularity and thus political power in Turkey, due to his military adventures, and may be looking for a way out of Syria. It will be difficult however for Turkey to withdraw from Libya, since it imports cheap oil from there.

Turkey has its own tensions with Israel and a Turkish withdrawal from Syria could be one way to reduce them. Significantly, since July 2nd, Israel has not engaged in any air attack in the northwest, while Russian security air forces have been active there.  And as time goes on, it will become ever more difficult for Israel to engage in such aggression as Syria’s air defenses are gradually updated.

What’s next for Syria?

The Syrian coalition of government forces (Syrian, Russian, and Iranian security forces) looks forward to the withdrawal of Turkey from the northwest, in which case a cease-fire may be possible, and even likely. One reason is that the NLF will lose much support, and weapons may cease to flow to takfiri terrorists in Idlib and the northwest.  Of course, any resultant cease fire or peace agreement in Syria will be strenuously opposed by the United States and Israel.

Israel — and thus the US — only seek regime change in Syria. The idea that HTS or the NLF or any takfiri terror group poses any sort of threat to Israel is of course absurd. Israel however continues to view the Assad government as one threat to Israel’s eastern expansion, and will leverage those takfiri groups covertly, in Israel’s continuing thrust for Syrian regime change and control.

So, if Turkey withdraws from the northwest, will Israel move in to fill the NLF power vacuum? That seems highly unlikely based on Israel’s policy of deliberate ambiguity.  Israel’s policy of deliberate ambiguity means that Israel cannot publicly show its true hand, ie that Israel supports terror in aid of its Expansionist agenda all over the Middle East. And such a withdrawal would pose a dilemma for the US, too, and highlight the US role in supporting terror in Syria.

That is, assuming Turkey does pull out of Syria… in August we shall see how accurate that assumption may — or may not — be!

Steve Brown is the author of “Iraq: the Road to War” (Sourcewatch) editor of “Bush Administration War Crimes in Iraq” (Sourcewatch) “Trump’s Limited Hangout” and “Federal Reserve: Out-sourcing the Monetary System to the Money Trust Oligarchs Since 1913”; Steve is an antiwar activist, and a published scholar on the US monetary system.

What’s next for Syria? Same as for Venezuela and Iran…..a slow, methodical economic strangulation by Bibi Bolton and company.