In a recent “30 for 30” documentary about the XFL, McMahon and his partner in the 2001 endeavor – former NBC Sports chairman Dick Ebersol, pondered the possibility of relaunching the league once promoted as having fewer rules and rougher play than other leagues.

“I don’t know what it would be,” McMahon told Ebersol, adding “I don’t know if it’s gonna be another XFL or what it may be or how different I would make it. It seems like in some way it would tie in either with the NFL itself or the owners.”

Then, on Friday, journalist and pro wrestling fan Brad Shepard tweeted “EXCLUSIVE: Vince McMahon is looking to bring back the XFL and may announce it on January 25th, 2018.” Then on Saturday, Shepard said that McMahon pointed to the “30 for 30” interview

EXCLUSIVE: Vince McMahon is looking to bring back the XFL and may announce it on January 25th, 2018.

EXCLUSIVE: Vince McMahon told people in WWE that he developed the desire to bring back the XFL when he was doing the ESPN 30 for 30 documentary on it.

WWE employees have been told internally to “get ready” because it is coming.

According to Zerohedge, Deadspin’s David Bixenspan approached the WWE – which neither confirmed nor denied the rumor, but did state that McMahon is “personally funding a separate entity from WWE, Alpha Entertainment, to explore investment opportunities across the sports and entertainment landscapes, including professional football,” followed by another tweet stating that WWE has filed for two new XFL trademarks this year.

A WWE spokesperson issued the attached statement to me & @Deadspin in response to my inquiry about tonight's rumors of a soon to be announced XFL revival. They declined further comment. Whatever Vince McMahon's "Alpha Entertainment" is, it's self-funded & separate from WWE. pic.twitter.com/oT0Oxyi2fV

In what I’m sure is a complete coincidence, WWE filed for two new XFL trademarks this year, both long after the 30 for 30 premiered.

Mike Florio of PFT explains that a rougher, more “old-school” NFL, is something fans want, but the NFL’s recently instituted concussion protocol (to address the growing brain injury epidemic), has made the game less appealing to its fanbase…

Arguably, the time may be right for the XFL or something like it. A November 2016 Sports Illustrated article regarding the current state of football in America created the distinct impression that fans want old-school football, with all the big hits and none of the obsessions over safety.

“Those attitudes from fans coupled with the messages that invariably will be sent by the incoming Commander-in-Chief,” we wrote on November 16, 2016, “suggest that the time may be right for someone to roll the dice with $250 million or so in the hopes of launching a football league that would essentially operate like a modern-day XFL — loud, proud, violent, brutal, bloody, and everything that the NFL was before political, legal, and social sensitivities forced the league to change.”

HMMMMMMMMMMMM..since all OWNERS of THE NFL are FREEMASONS….will TRUMP buddy try to start another XFL for non members or are THE JEWS BEHIND CRYPTO JEW COLIN KOEPERNICK to start a NEW WORLD ORDER FOOTBALL LEAGUE 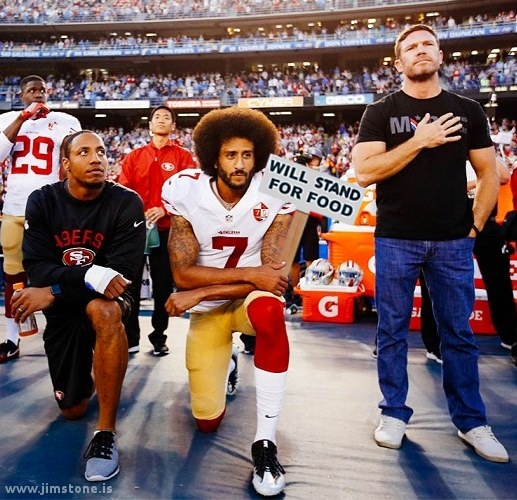