At this point there’s not even so much as feigning surprise or suspense in the now sadly all-too-familiar Syria script out of Washington.

The Wall Street Journal has just published a bombshell on Sunday evening as Russian and Syrian warplanes continue bombing raids over al-Qaeda held Idlib, citing unnamed US officials who claim “President Bashar al-Assad of Syria has approved the use of chlorine gas in an offensive against the country’s last major rebel stronghold.”

And perhaps more alarming is that the report details that Trump is undecided over whether new retaliatory strikes could entail expanding the attack to hit Assad allies Russia and Iran this time around.

That’s right, unnamed US officials are now claiming to be in possession of intelligence which they say shows Assad has already given the order in an absolutely unprecedented level of “pre-crime” telegraphing of events on the battlefield.

And supposedly these officials have even identified the type of chemical weapon to be used: chlorine gas.

The anonymous officials told the WSJ of “new U.S. intelligence” in what appears an eerily familiar repeat of precisely how the 2003 invasion of Iraq was sold to the American public (namely, “anonymous officials” and vague assurances of unseen intelligence) — albeit posturing over Idlib is now unfolding at an intensely more rapid pace:

Fears of a massacre have been fueled by new U.S. intelligence indicating Mr. Assad has cleared the way for the military to use chlorine gas in any offensive, U.S. officials said. It wasn’t clear from the latest intelligence if Mr. Assad also had given the military permission to use sarin gas, the deadly nerve agent used several times in previous regime attacks on rebel-held areas. It is banned under international law.

It appears Washington is now saying an American attack on Syrian government forces and locations is all but inevitable.

And according to the report, President Trump may actually give the order to attack even if there’s no claim of a chemical attack, per the WSJ:

In a recent discussion about Syria, people familiar with the exchange said, President Trump threatened to conduct a massive attack against Mr. Assad if he carries out a massacre in Idlib, the northwestern province that has become the last refuge for more than three million people and as many as 70,000 opposition fighters that the regime considers to be terrorists.

The Pentagon is crafting military options, but Mr. Trump hasn’t decided what exactly would trigger a military response or whether the U.S. would target Russian or Iranian military forces aiding Mr. Assad in Syria, U.S. officials said.

Crucially, this is the first such indication of the possibility that White House and defense officials are mulling over hitting “Russian or Iranian military forces” in what would be a monumental escalation that would take the world to the brink of World War 3.

"Lots of evidence"
Trump regime not even trying, they're just phoning this disinformation campaign in pic.twitter.com/YD9MtXK97c

The WSJ report cites White House discussions of a third strike — in reference to US attacks on Syria during the last two Aprils after chemical allegations were made against Damascus —  while indicating it would “likely would be more expansive than the first two” and could include targeting Russia and Iran.

During the debate this year over how to respond to the second attack, Mr. Trump’s national-security team weighed the idea of hitting Russian or Iranian targets in Syria, people familiar with the discussions said. But the Pentagon pushed for a more measured response, U.S. officials said, and the idea was eventually rejected as too risky.

A third U.S. strike likely would be more expansive than the first two, and Mr. Trump would again have to consider whether or not to hit targets like Russian air defenses in an effort to deliver a more punishing blow to Mr. Assad’s military.

Last week the French ambassador, whose country also vowed to strike Syria if what it deems credible chemical allegations emerge, said during a U.N. Security Council meeting on Idlib: “Syria is once again at the edge of an abyss.”

With Russia and Iran now in the West’s cross hairs over Idlib, indeed the entire world is again at the edge of the abyss.

WSJ propaganda. Maybe it’s a forcing of the hand, but Trump will lose his base and be gone by years end.

“Deception is a state of mind and the mind of the State.”
—James J. Angleton, CIA

This is proof beyond doubt that Trump is just as bad as Bush, Obama and Hitlery Clinton. Time to stop all of them.
Let’s build the wall… Not on the border to Mexico, but around Washington D.C. – make it a maximum security prison, nobody allowed to leave it ever.

When the NEO’s start WW3, the military takes position on the beltways of all major cities. The animals are kept in.

WMDs all over again — is the US public really that stupid? Or is it just that the brain-dead MSM can’t think up any new false flags? The Wall Street Journal’s propaganda is the same as that of the NYTimes and WaPo before the attack on Iraq. Everyone ready for WW3? So folks, when Trump tells us that the MSM is the “enemy of the people” — he’s the voice of truth in a swamp of lies. Write to the author of this propaganda garbage and let him know that he is being used by the deep state to start… Read more »

There was a cell phone video that made it up on Youtube that showed a news crew (CNN) helping the “good rebels” to stage the first “Assad did it” FF and Obama must have seen it. It went down in hours, but I saw it. This time they closed down Youtube in Syria, so that can’t happen again 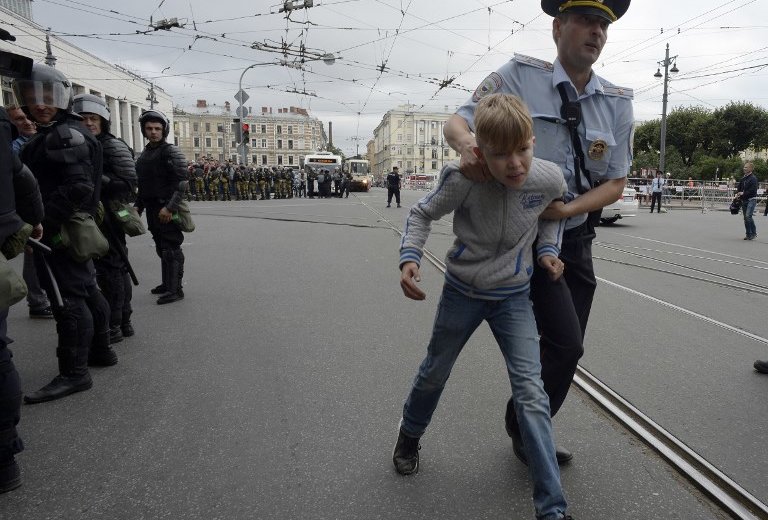 Russian terrorist arrested because the boy is against the pension reform

How do you know it wasn’t Veth?

Iraq all over again? Do these American idiots ever learn anything? How many more dead can their conscience sustain…assuming they had a conscience?

‘When the humidity rises, your skin burns’: Gas leak causes evacuations in Crimea as Russia and Ukraine trade blame – media 13:59, 10 September 2018 WORLD 137 0 It’s still unclear how exactly the gas was released, but Russian authorities suspected that a heat wave evaporated the water reservoir where the plant’s waste is dumped, resulting in the toxic remnants being released into the atmosphere. REUTERS When a radioactive cloud mysteriously drifted across Europe last fall, it took weeks for scientists figured out the likely origin: the Mayak nuclear reprocessing plant in the south of Russia. Even though researchers found… Read more »

Is anybody still stupid enough to believe anything the Amazians say, on anything,or has the world been so numbed by Amazian BIG PHARM drugs, that they are incapable of maintaining any constructive. logical thought? Amazia’s little lap poodle, the French, are trying to bark like an Alsatian, but only whimper according to their script. Yes, sadly, very few will read any of this reporting, these comments, and is why we are still allowed, by Big Mumma, to write them, as she knows a tiny number of citizens can crawl out of their apathy to care. Oh, look daddy, a giant… Read more »

This statement by State Dept operative Jeffries is for political consumption. Trump must be made to look tough, that is all. BUT things could easily escalate out of control. Here is an analysis that takes things a bit further: http://www.newsilkstrategies.com/news–analysis/state-department-says-lots-of-evidence-assad-preparing-chemical-weapons-attack-but-wont-provide-any-to-public

McCain’s legacy lives on. The USA is STILL backing the terrorists and doing what they can to keep the ‘sheeple’ in an uproar against Assad…and of course their (un)intelligence communities keeps coming up with undisclosed sources of information from Assad’s desk…and Trump’s….even Putin’s…and their trolls go to great lengths to spread 1/2 truths (whole lies) and obfuscate no end…

The ONLY reasons bullies bully is because they think the object of their bulling iss weaker than them. Who is being bullies here? Obviously it’s Putin. And his behavior so far is the reason he is being bullied. If he had delivered S-400 to Syria and if he had gone on TV pointing out the previous “chemical attack” was found to be a total lie he might have had some leverage. he has done neither. All he has done so far is getting his face kicked in. Obviously USA/UK/France aren’t impressed with his cowardliness and think its an invitation for… Read more »