Ukrainian President Petro Poroshenko is imposing martial law after his country’s ships faced off with Russian ships near Crimea. The Ukrainian parliament, the Verkhovnaya Rada, has at this time not yet signed off on this order, but they are expected to do so.

The martial law status will be in effect from November 26 to January 26, about sixty days.

This happened because Ukrainian ships ventured deliberately into Russian territorial waters near the Crimean Peninsula, apparently not notifying Russian authorities before doing so, though the Ukrainians claim they did warn of their crossing.

RT chronicled the events from the Russian point of view, which we provide here with emphases added:

The waters near the Crimean peninsula were the site of a tense standoff between Russian and Ukrainian ships that involved a chase, some gunfire, and fighter jets, followed by strong statements from Moscow and Kiev.

The Ukranian vessels were sailing between two Ukrainian ports: from Odessa in the Black Sea to Mariupol in the Azov Sea. The only waterway that connects these is the Kerch Strait between Crimea and mainland Russia. Kiev says it notified Moscow in advance that its navy ships would be sailing through the area. Moscow denies that it was given warning.

While both Russia and Ukraine have freedom of navigation in the Kerch Strait under a 2003 treaty, there are detailed technical rules on how vessels should pass through the narrow, complex waterway. All traffic in the area is controlled by the Crimean sea port of Kerch, and every ship should contact the facility, report her route and destination, and receive permission to sail through the Strait.

At around 7am Moscow time (4am GMT) on Sunday, two artillery boats and a tugboat belonging to the Ukrainian Navy crossed the Russian maritime border in the Black Sea and headed to the Kerch Strait.

These ships had not followed the procedure, said the Russian Federal Security Service responsible for maintaining order at the border. 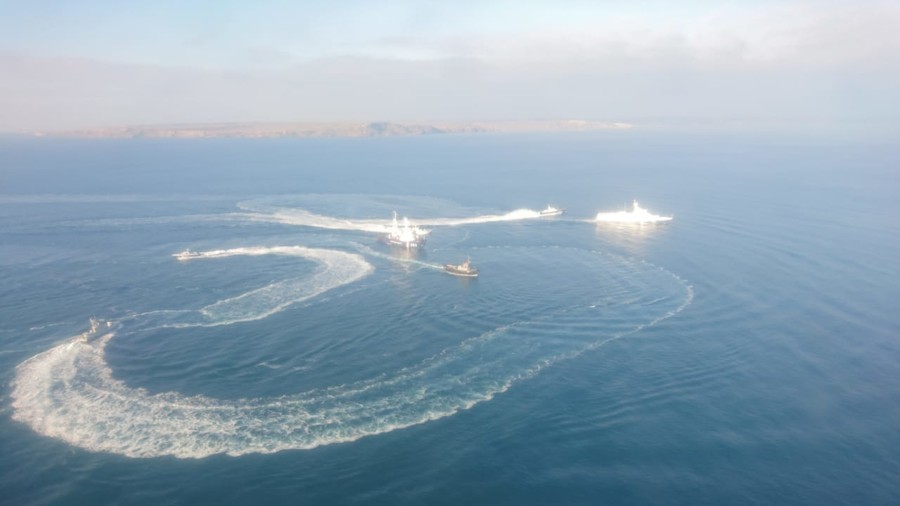 The Russian officers repeatedly asked the Ukrainian vessels to leave Russia’s territorial waters, but they ignored those requests. The ships also entered waters that had been temporarily closed to navigation.

Meanwhile, around 11:30am Moscow time (08:30am GMT), two more Ukrainian vessels departed the Azov Sea port of Berdyansk and approached the Kerch Strait from the other side, but then turned back and returned to port.

A giant bulk freighter accompanied by several Russian military vessels blocked the only passage through the Kerch strait for security reasons. The Russian military also scrambled aircraft, while the situation remained tense. Videos from the site showed Russian Ka-52 gunships cruising under the Crimea Bridge. Later, they were joined by several Su-25 strike fighters.

At midnight, the FSB released a statement, saying that Russian warships had to open fire after the three Ukrainian ships ignored “legal demands to stop” and continued “performing dangerous maneuvers.”

Three Ukrainian sailors were wounded and given medical assistance, while the ships were seized. The group of ships that were heading to the strait from the Azov Sea turned back to their port.

Kiev uses “bandit methods” to achieve its goals, the Russian Foreign Ministry’s spokeswoman, Maria Zakharova, said following the incident near the Kerch Strait. Ukraine “first stages a provocation, then plays power games, and [eventually] accuses [another side] of aggression,” she continued.

Companion news pieces by RT and Sputnik News reported on President Poroshenko’s initiative to ask his Parliament for a martial law declaration for Ukraine.

However, this is a very strange response. Placing the entire country of Ukraine under martial law because of a naval incident with Russia makes absolutely no sense.

However, this is how things operate in Ukraine, and there is of course a bigger motive. Sputnik News gives some indication as to what that might be by describing what martial law in Ukraine would actually accomplish (again, we add emphasis):

One of the key aspects of Ukrainian citizens lives that will be affected by martial law is their right to participate in elections and referendums. The proposed martial law will last for 60 days, meaning that it will at least affect the presidential election campaign that is due to start in 2019, and, considering the law can be prolonged, may even affect the elections themselves, which are scheduled for 31 March 2019. In other words, President Petro Poroshenko will be able to keep his post as long as martial law lasts.

[The] same goes for the parliament, which can’t be re-elected while martial law is in effect. If it lasts for little over a year, the elections to the Verkhovna Rada of Ukraine, which are to take place on 27 October 2019, will also be postponed. Furthermore, both the parliament and the president won’t be able to amend the Ukrainian Constitution, including the clauses regarding martial law.

Although certain fundamental rights can’t be alienated even during martial law, Ukrainians will still be stripped of some of their rights, apart from the right to vote. Namely, the government will be able to ban any gatherings, strikes, and protests if it considers them ‘threatening’. Kiev will also be able to impose a curfew and limit citizens’ movements across the country, if it deems it necessary.

Additional Powers for the Government

Also, Kiev will be able to command any plant or factory to switch production to a military footing for the duration of martial law. At the same time, working hours and conditions can also be altered by a government decree, although workers retain their right to rest and minimal pay.

Failure to abide by any of these demands and limitations is punishable just like as any violation of the regular law. The government can prolong martial law as long as it finds that the threat to the state’s sovereignty or intergrity continues.

Ukraine’s activity has been most ominous over the last several months. The country’s leader worked with US assistance to get the Ecumenical Patriarch to “restore” clerical status to anathematized Filaret Denisenko, and plans are continuing at a furious pace to try to get Ukraine to have its own “autocephalous” “Orthodox” Church, which, judging from the statements of Denisenko, Poroshenko and others, is not focused on Jesus Christ and salvation at all, but only on hardcore nationalist “Ukrainianism.”

Imposing martial law on his own people is an indication that Poroshenko may be concerned about two things:

1. He is preparing for war with Russia.

2. He is afraid of his own population rejecting his actions, hence the quick move to martial law following an incident that, while serious, does not match the specifications of some national disaster or crisis that would make such a move necessary.

Just Aman • 3 hours ago It’s interesting that the BBC are not hyping up this story as they almost invariably do with anything that can be spun against those nasty aggressive Russkies (although in Cold War days they were all for détente with those nice Soviets). To me this means instructions have come from on high that maybe this story will backfire – the same thing happened after the chemical attack in Douma which was almost immediately exposed as a hoax. Was this just an attempt ed prvococation by Ukraine or something more sinister? There are internet rumours that… Read more »

The story would backfire spectacularly as the BBC know the Ukrainians were in the wrong, but that isn’t to say Kiev won’t strike. Russia have played a sensible game in going to the UN. If Ukraine does strike they will be the aggressors no matter the spin and any retaliation will be justified, something the West doesn’t want to play up. I will say this though. If the Ukraine does attack Russia would be wise to move a front forward into the Donbass. If Ukraine are going to be beligerant then give the bastards a reason to cry about it.

Remember that 2 of these junk boats were just given to the Ukraine only weeks ago it was announced. Probably these were disposable crap and given to them for this invasion of Russian territorial waters.

Invasion??? Are you still drunk this morning? Ukrainian boat going through its own territorial water doesnt have to ask Russia anything pal!

This was predicted. Trump will do the same thing to save his butt, make up another war for distraction. These 2 guys are nearly identical dictators in every way except official title.

Margaret Thatcher did the same, going to war at the Falklands, to ensure her re-election.

One thing every Ukraine soldier knows is that only outcome of fighting the Russians is certain death. Run away, surrender, hide all seem like more practical courses of action. And if you do happen to die in combat or get injured your government will care less. You’re on your own buddy! Should have run to Poland when you had the chance.

Ukrainian President Petro Poroshenko is trying very had to become the next Adolf Hitler with Imposition of martial law.

Germany had an eye for detail and hard workers (still does). What does Ukraine currently have?

No, not even against « General Russian Winter »…

This aint no Russia water! This is Ukrainian water. Why should Ukraine ask to pass through its own territory???

Seems to follow a familiar course for America’s Puppets … overthrow a legitimate elected government, replace it with a fake elected government. Then, when the fake government faces reelections they cannot win …. declare martial law and appoint yourself president. Works every time.

So…this is a ploy by Poroshenko to extend the life of, what appears to be, his failing government? It sounds plausible. The Ukrainian Navy seemed reckless as they didn’t follow maritime procedure. Poroshenko is asking for “Martial Law” throughout Ukraine because three of his ships were seized in a provocation with the Russians. That doesn’t make any sense to me either. Doesn’t one insist on Martial Law for reasons of internal stability?
How does this incident reflect instability in the Ukrainian population? From where do these politicians get their faulty logic?

Fat, overweight chocolate producer Poroshenko in his “combat outfit” looks ridiculous. He has never been in the Army one single day of his life, now declaring “Martial Law”. Ahahaha! He will probably eat his tie – like the Georgian coward Sakhashvili did – when War starts and the Russian troops march into Ukraine. What a stupid loudmouth he is, a US puppet, worse than all of the European puppets together.

Talk about the height of conceit! Poroshenko doesn’t seem to be playing with a full deck! He can’t even conquer Donbass, he’s going to take out the Russian Army?

Donbass is ukraine, like Crimea, under Russian illegal fascist occupation