The Duran’s Alex Christoforou and Editor-in-Chief Alexander Mercouris discuss the release of the hearsay ‘whistleblower’ complaint letter released by the House Intel Committee, which has launched mass liberal left hysteria concerning a conversation US President Trump had with then, newly elected Ukraine President Zelensky.

The complaint letter appears to have been drafted by professional lawyers and is obviously not a document written by a single person, which begs the question as to who, or what group of people, wrote this document which has pushed Nancy Pelosi to launch an impeachment inquiry?

THE DEMOCRATS ARE TRYING TO DESTROY THE REPUBLICAN PARTY AND ALL THAT IT STANDS FOR. STICK TOGETHER, PLAY THEIR GAME, AND FIGHT HARD REPUBLICANS. OUR COUNTRY IS AT STAKE!

The House Intel Committee has released the full (modestly redacted) complaint letter from the so-called ‘Whistleblower’ regarding Trump’s “urgently concerning” conversations with Ukraine. 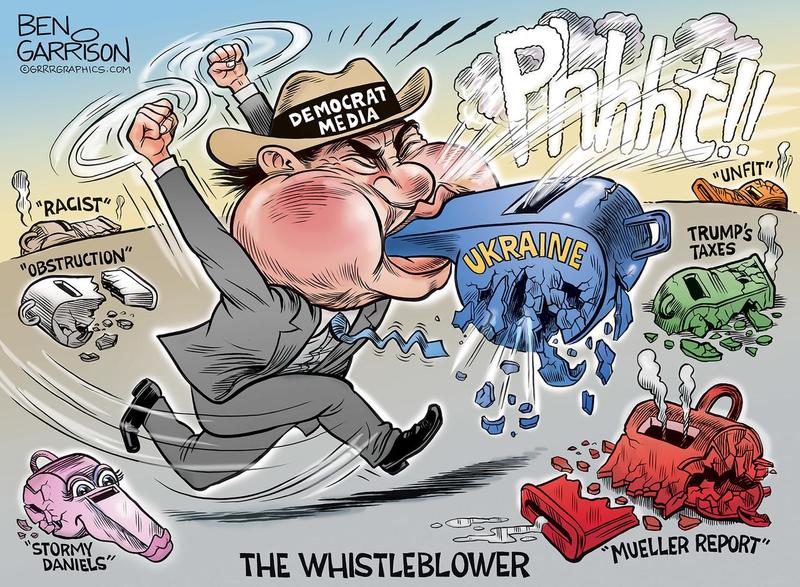 In the course of my official duties, I have received information from multiple U.S.
Government officials that the President of the United States is using the power of his office to solicit interference from a foreign country in the 2020 U.S. election.”

“Over the past four months, more than half a dozen U.S. officials have informed me of various facts related to this effort.”

“I am deeply concerned that the actions described below constitute “a serious or flagrant
problem, abuse, or violation of law or Executive Order” that “does not include differences of
opinions concerning public policy matters,”

So to the crimes and misdemeanours…

The Ukrainian side was the first to publicly acknowledge the phone call. On the evening of 25 July, a readout was posted on the website of the Ukrainian President that contained the following line (translation from original Russian-language readout):

“Donald Trump expressed his conviction that the new Ukrainian government will be able to quickly improve Ukraine’s image and complete the investigation of corruption cases that have held back cooperation between Ukraine and the United States.”

“Aside from the above-mentioned “cases” purportedly dealing with the Biden family and the 2016 U.S. election, I was told by White House officials that no other “cases” were discussed.”

Oh so other people confirmed that Trump did not seek more, but the ‘whistleblower’ claims calls and documents were “locked down” – in some nefarious manner?

And here’s the “smoking gun”…

“During this same timeframe, multiple U.S. officials told me that the Ukrainian leadership was led to believe that a meeting or phone call between the President and President Zelenskyy would depend on whether Zelenskyy showed willingness to “play ball” on the issues that had been publicly aired by Mr. Lutsenko and Mr. Giuliani. (Note: This was the general understanding of the state of affairs as conveyed to me by U.S. officials from late May into early July. I do not know who delivered this message to the Ukrainian leadership, or when.)

Shortly after President Zelenskyy’s inauguration, it was publicly reported that Mr. Giuliani  met with two other Ukrainian officials: Ukraine’s Special Anticorruption Prosecutor, Mr. Nazar  Kholodnytskyy, and a former Ukrainian diplomat named Andriy Telizhenko. Both Mr.  Kholodnytskyy and Mr. Telizhenko are allies of Mr. Lutsenko and made similar allegations in  the above-mentioned series of articles in The Hill.”

The entire note reads like a journalist or lawyer wrote it, and citing NYTimes numerous times lends it even less credibility.

Simply put, some folks told some other folks about administration folks that might be talking to some Ukrainian folks?

Perhaps the most interesting part is the following…

“I was not a witness to most of the events described… However, I found my
colleagues’ accounts of these events to be credible…“

Perhaps he would better named a “gossip-blower”.

The wise will read direct from Shokin and see that Trump is justified. In fact it begs the question, why didn’t the FBI provide it to Trump and he had to seek investigation from Ukraine? Is the FBI still under the deep state control (Obama legacy), not the Commander in Chief….apparently yes.

Date of the filing appears 2017, but I don’t speak Russian and don’t see a later date. I can’t imagine Trump keeping this a secret if he had been provided the Shokin sworn statement.

Trump is really dumb to have had such a discussion on the telephone.
He and his circles, no doubt, had knowledge of the Biden bragging video. He should have directed the authorities on this issue via his twitter feed and via his rallies. I don’t think he’s going to be impeached. But after Russiagate, Ukrainagate simply energizes his enemies and the base of his enemies. Biden can vanish, and will vanish from the running scene, and Trump will lose to someone like Warren, Yang, or whomever. Hillary isn’t running anymore…

No, not really. I see nothing wrong with the US President seeking information that the FBI clearly hasn’t provided to him….the “Shokin Witness Statement” made for Austrian court in 2017…they have to have it.

Your hate does not dictate US National security. I want the full truth about Hunter Biden with Ukraine and China that our FBI seems unwilling to provide to our President.

What are you talking about Tjoe? Are you living in a bubble? Trump isn’t interested to drain the swamp. Who gives a rat’s behind about the FBI? Institutions and political parties are moved by mass-movements. Why is Trump wasting his time bragging on social media and at his rallies, without hitting clear objectives? Also, unless you’re a representative of a client state, Washington isn’t representing you the US citizen. You’re being kept tranquilized and misinformed.

Yeah, but now that Oxycontin is off the shelves, there’ll be a civil war or revolution for sure.

Is he an American? Then chances are yes, he’s living in a bubble.

I said it rather plainly, I want to see a real investigation of Biden’s dealings with Ukraine and China. Our FBI should do it, but they appear to give less than honest services these days. Do you have a comprehension problem Ed ? I made that comment when nobody had even mentioned the Shokin Witness Statement. What is it you think I don’t know about or are misinformed about….you make some stupid generalization and try to fit me into it ….yet you don’t know shi+ about me.

This is how a cunning man destroys the credibility of smart arses and yes pulls might I say the best practical joke of 2019 on a bunch of uppity o’wristycrats. If he didn’t set this trap then serendipity rules because they not only got caught in the trap but are now trying to chew their leg off to get out.

Well, he ain’t no brain surgeon. For that, they’d have had to elect Ben Carson, then the US could have saved beaucoup money storing grain to feed the troops in Egypt’s pyramids.

Does that mean that America also intends to follow in Napoleon’s footsteps onto the Russian steppes? We all know how that turned out.

Ain’t nobody normal in American politics?

Nope not any more!!

Oh yes she is – she is a conniving POS who deserves to be Queen if the world !!!

Shining Light on a Hill of Beans

Shining Light on a Hill of Beans

Quote: “White House officials told me that they were ’directed’ by White House lawyers to remove the electronic transcript from the computer system in which the transcripts are typically stored”

Did they use BleachBit or just an old fashioned hammer?

I believe that John Brennan is behind this.

Shining a light on infamy
Reply to  T W Huning

That old fart’s as dirty as a pair of swamp britches.

Uncle Billy
Reply to  Shining a light on infamy

In the Eye of the Beholder
Reply to  Uncle Billy

Can you imagine? Head of the CIA once having voted in his youth for the head of America’s Communist Party for president. Then, to top it off, heading to Ukraine in his old age to give unquestioning support to Ukraine’s Nazi Party apparatchiks like Parubiy and company, immediately after overthrowing a democratically elected government.

The guy must be totally bonkers. (not to mention the rest of the CIA) (or Washington in general, for that matter)

One of these days you’ll realize that all your efforts to back Trump have been in vain, because the orange shill will have betrayed you all by then. The only way to fight entrenched corruption is to mount popular support. Trump isn’t doing this. He had not intention of doing this. He lied when he said that if he was president, Hillary would be in jail.
Nobody has been prosecuted. Trump is gutless. He will no doubt show his true colors in the second term the lamestream media will provide for him.

Repug or Demon, America is screwed.

Posting....
wpDiscuz
22
0
Would love your thoughts, please comment.x
()
x
| Reply
Send this to a friend