Moments ago, as was widely expected, president Trump just issued the second veto of his presidency – the first one being his rejection of a measure that would reverse the national emergency he declared on the Southern border on March 15 – rejecting a Congressional resolution to end US military support for the Saudi-led war in Yemen.

In a statement to the Senate released by the White House, Trump called the joint resolution “unnecessary”, warned it represents a “dangerous attempt to weaken my constitutional authorities” and argued it would negatively affect U.S. foreign policy. What he really meant is that the US military-industrial complex stood to lose billions in potential revenue from the biggest US weapons client. As a result countless innocent civilians will continue to die for an unknown period of time but at least the stock price of Boeing, Lockheed-Martin and Raytheon will not be put in jeopardy. 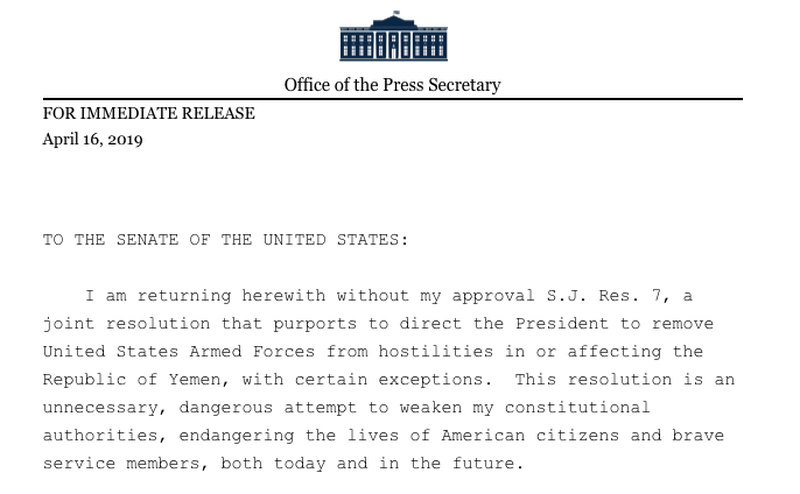 As a reminder, last month the Senate voted 54-46 to pass a resolution requiring the president to withdraw any troops in or “affecting” Yemen within 30 days unless they are fighting al Qaeda. The House passed the measure earlier this month with a 248-177 vote. Neither was enough to override Trump’s veto.

Predictably there were opinions on both side of the topic, with some – not many – praising Trump’s decision to perpetuate a “proxy war”…

Excellent Trump here. This is an important proxy war and it is crucial that the Iran-backed Houthis do not gain a stronghold in the Arabian peninsula.

Also, shame on @AP for tendentious “Saudi-led” phrasing. It is a defensive war for the Saudis against Iran/Houthi aggression. https://t.co/HRFSFST1cs

… while others were disgusted.

The President does not have legal authority to wage war against Yemen. Only Congress can declare war. That has not happened; Congress has voted to end U.S. support for the #WarInYemen. ⁦@realDonaldTrump⁩’s veto is an assault on the U.S. Constitution. https://t.co/CAI1N7Mom5

The #Trump veto on #Yemen sends a strong message that the US will stand by systemic rights abusers as long as they flatter the ego of our budding would-be authoritarian. No US interest is served by supporting the #Saudi/#UAE war in Yemen.

To his credit, @RepMarkMeadows was 1 of 16 House Repubs to vote for the Resolution. Question now is whether he’ll urge his colleagues to override Trump’s veto and stop using US tax dollars to subsidize Saudi Arabia’s atrocities. https://t.co/a8p7oP2lGx

Trump’s Veto Keeps US Complicit in #Yemen, For Now – "Trump can’t claim to be ending endless wars while opposing the will of a majority of Congress to end our involvement in the catastrophic, unconstitutional war in Yemen." – Read our statement: https://t.co/Pnvk5Svzcb pic.twitter.com/TKn1sPyXcI

While it is unclear what, if anything, will now end the war in Yemen – perhaps Russian intervention will again be required – expect many more presidential vetoes for the next 2 years (at least).

After this, how in heaven’s name can anyone maintain that the Deep State is Trump’s enemy. He is the biggest alligator in the swamp!

I believe he has a blind spot with regard to Israel. During his campaign he was belligerent towards Iran which is Israel’s biggest competitor in the region. This is also what his supporters want as many of them are Christian Zionists. So he is in sync with his voter base on this one I think. Israel and Saudi Arabia have a strategic alliance. Nothing can be resolved in that region until both regimes are removed from the picture. Personally I believe this is what will happen in due course.