Like his previous visit to Saudi Arabia, Trump’a visit to Asia is amounting to little more than a sales pitch for the US arms industry, with a cheesy photo-op with Japanese Prime Minister Shinzō Abe as a meaningless souvenir to encapsulate a geo-politically irrelevant visit. 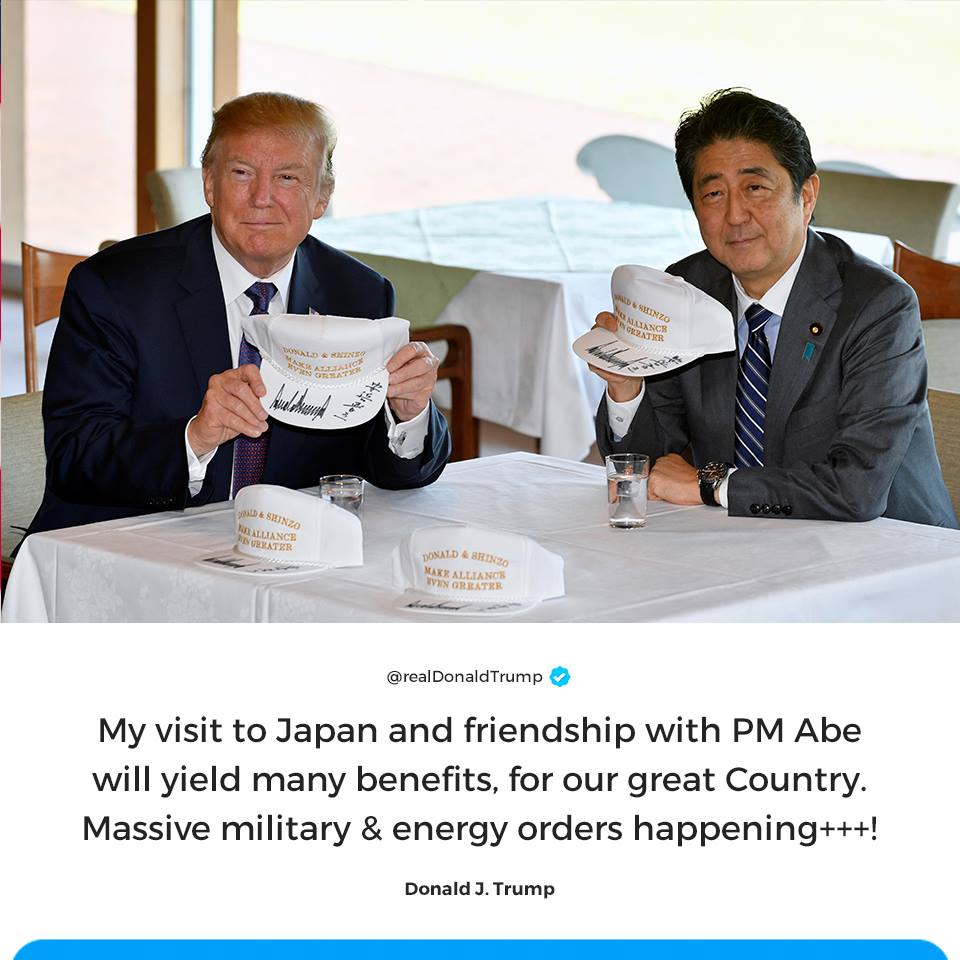 But while Trump is busy selling his country’s military hardware to Asia, media attention has rightly been focused on the far more dynamic developments in the Middle East, namely the Saudi Purge and the related forced resignation of the Lebanese Prime Minsiter Saad Hariri.

As geopolitical expert Andrew Korbyko wrote, the purges in Saudi Arabia, led by Crown Prince and de-facto ruler Muhammad bin Salman, amount to a swamp draining endeavour that vastly eclipses anything Donald Trump sought to do, let alone that which he has been able to accomplish.

The next logical question is therefore: what is Donald Trump’s position on Muhammad bin Salman’s ‘great purge’?

On the surface, Trump is blissfully ignorant of the events in Saudi, while meeting with allies, plus the Chinese leadership, on the other side of the world.

But this raises the next even more pressing question: is the timing of the great Saudi purge because of or in spite of Donald Trump’s prolonged absence from the United States, his longest to-date as President?

In late October, Rex Tillerson visited Muhammad bin Salman and Iraqi Prime Minister Haider al-Abadi in Riyadh. The meeting was a failure by most accounts. The summit was supposed to reconcile the Shi’a leadership of Iraq with the Sunni Wahhabi Kingdom of Saudi Arabia, but far from doing that, Tillerson’s admonition to Iraq demanding Baghdad “send Iranian troops home” was met with a furious response from the Iraqi government.

While Tillerson had private discussions with the Saudi leadership, it is not clear what they entailed. It is well known that the CIA and many other elements of the US deep state are displeased with the behaviour of Muhammad bin Salman (MBS), favouring instead the old ‘status quo man’, former Crown Prince Muhammad bin Nayef.

The US administration’s view on MBS is less clear. What seems self-evident though is that many in the US take a cautious view of MBS’ penchant for rocking the boat. The fact that Wall Street darling Prince Alwaleed bin Talal has been arrested as part of the purges, has certainly led to protracted nail biting in Washington and New York.

Furthermore, MBS’ apparent orchestration of the country’s pivot towards Russia and China, while still embryonic, cannot sit well with many in the US.

In many ways, if one were to assume that the US is sceptical about the ‘MBS revolution’, this would be the best time to execute it. Donald Trump is away from his seat power and Secretary of State Rex Tillerson’s authority seems to be declining by the day. Meanwhile, the triumvirate of generals who many say hold the real power in Washington, Defense Secretary Mattis, National Security Advisor McMaster and Chief of White House Staff Kelly, seem poorly positioned to take a real stance on the Saudi problem. This is true for several reasons.

First of all, the generals appear more keen on making ‘yes or no’ decisions than on making highly complex diplomatic moves. Questions like ‘do we invade North Korea: yes or no?…seem to be the kinds of issue where the generals wield veto power over the civilians in the White House.

Secondly, if the US opposes the MBS led purge, what is to be done? The US could ask MBS to stop, but unless Trump can be distracted from his Asian trip to make such a make-or-break phone call, this seems unlikely, not least because the US would be showing its cards to the ‘new’ Saudi regime fairly early in the game, something which could cause MBS to pivot his diplomatic contacts even further towards China and Russia.

Of course, the CIA could get involved and put an end to the ‘revolution’ in one way or another, but this would lead to nothing short of a open calamity in America’s closet Arab ally. With Donald Trump set to visit China in the coming days, there is nothing that would show American weakness in front of China more than a fully blown, CIA led palace coup in Saudi Arabia.

Even if the US were to spin a CIA intervention into Saudi as a victory, in the style of the US military intervention in Lebanon in 1958, China would see it differently. For China, the US “losing control” of its close ally and resorting to a kind of counter-revolutionary regime change, would feed the Chinese stereotype (which happens to be true), that the US barks loudly and when it  bites, it bites unevenly, arbitrarily and most important, in an ugly fashion.

The other option is to wait and handle the Saudi crisis when Trump is back in Washington. But with Trump’s Asia visit on its second full day of a nearly 2 week trip, the Saudi purge could well be consolidated by the time the US President is back on US soil.

This leaves only two logical interpretations for the US position on the Saudi purge:

1. Muhammad bin Salman struck while the US President was on a long trip and distracted by other matters, knowing that the US would not be able to as effectively oppose the purges with Trump away.

2. Donald Trump himself wanted to obfuscate responsibility for the matter and had Rex Tilleron secretly demonstrate America’s approval of the move, so long as it was done while Trump had a convenient excuse not to deal with it.

Many who support the second theory, tend to state that Donald Trump’s personal dislike of the Saudi regime as expressed during his campaign and his dislike of the now arrested Alwaleed bin Talal moreover, means that he is secretly pleased with the purges. This may well be true and certainly must be ruled in as a possibility. However, since becoming President, his relations with Riyadh have been hailed by both sides as incredibly good. Trump meanwhile has not radically realigned the position of the US diplomatically as expected. Apart from angering Russia and China even more than Barack Obama (in many respects), little has changed apart from the schism with the EU over Iran, something which Trump himself stated will not lead to the US and EU changing the overall nature of their relations.

Even Trump’s passive Tweets in favour of Saudi King Salman and Crown Prince Muhammad bin Salman, read more like a passive statement of aloof approval, rather than a concerted attempt to engage in the situation. The Tweets stink of an ex-post-facto attempt to not appear to be left out the loop, even though, Trump may be more left out of the loop than he lets on. The more Trump approves, the more it means he has no option but to approve, it crucially does not mean the US government would have approved of the purges beforehand.

I happen to think that the US has merely been blind-sighted by a Saudi regime that they are still willing to placate, even at this hour. The US may only pounce on Riyadh when it is too late–after the purges have been effectively executed to their logical conclusion. How that would-be pounce manifests itself could still however, cause harm to stability in Saudi. At such a stage, it would be a matter of merely working with reality and decided whether to tempt the MBS regime with carrots or try to undermine it with sticks, knowing full well that such sticks will only cause MBS to grow more attracted to long term partnerships with Russia and China who are ready, willing and able to provide such a thing.

It’s helpful to remember that the US seemed equally blindsided by the eruption of the Qatar crisis in June of 2017, when Trump eventually Tweeted his support for Riyadh while the State Department remained neutral.

With Trump away and with Tillerson inclined towards moderation anyway, it appears that the ultimate conclusion the US has drawn at this stage can be summarised as: “when in doubt, do nothing”. This is exactly what the US has done, thus far.