This almost three year old assessment of the Libyan quagmire reinforces vividly today the need for a new UN and US (West) policy towards Libya, abandoning their selection, not the Libyan people’s, of Serraj and the GNA/PC and their Muslim Brotherhood backers which specifically includes as their main supporters two regional powers, Turkey and Qatar.

The U.N. (and US) must find a consensus candidate to be an interim Prime Minister to immediately form a government and get Haftar to agree to the man (or woman’s) candidacy.

Serraj, the GNA and Muslim Brotherhood have NOT worked and will NEVER work. They are completely redundant.

More of the same is not a solution.

Given the below was published in 2016, it is interesting to see that nothing has changed in last three years. The solution is NOT in more UN talks which have failed for over 7 years but the UN picking a new ‘vehicle’ other than the one they chose, the GNA and their abysmal choice of Serraj and his Muslim Brotherhood supporters. The Libyan people were not at all involved in the decision of the choice of Serraj, Maiteg & co.

Einstein famously once said that insanity is doing the same thing over and over and expecting a different result. 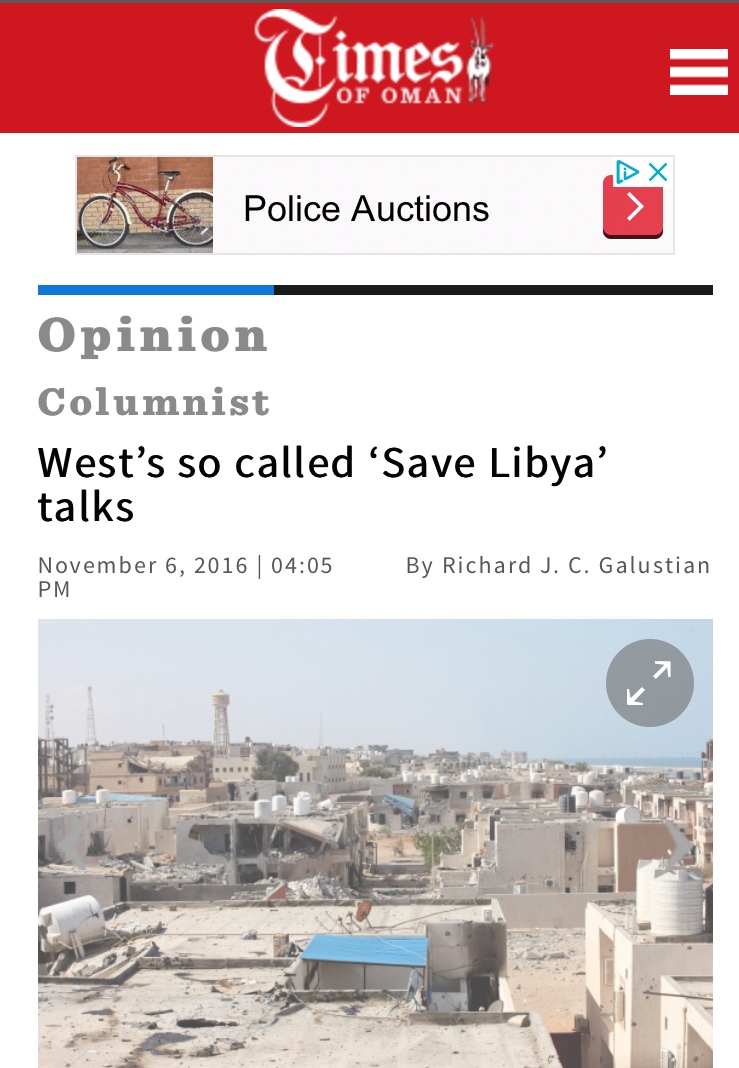 West’s so called ‘Save Libya’ talks

For months it has been obvious to everyone, except a handful of stubborn Western diplomats, that Libya is in free-fall and fast heading for the rocks. A series of Western-led talks about the country’s decline have failed to alter this trajectory or slow down its rapid descent yet still they go on, sometimes without a single Libyan even sitting at the table!

Last week in London a series of meetings took place at the FCO which yet again resulted in absolutely nothing. No surprise there. Along with Libyan unelected MPs and ministers, even the UN chosen PM Fayez Serraj, and representatives from the World Bank – who recently warned that Libya was on the verge of an ‘economic catastrophe’ – as well as the International Monetary Fund, all crammed into Britain’s Foreign and Commonwealth Office to participate in yet another Libya-related farcical conference.

At the heart of what has become an internationally mis-managed disaster in Libya lies the UN-backed Government of National Accord (GNA) – a hopeless ‘virtual’ entity which, after months in alleged power, has failed to take full control even over the capital Tripoli. The palpable weakness of the GNA and its unelected Presidential Council has become increasingly evident. For example it has been unable to claim back control of the parliamentary complex and adjacent luxury Rixos hotel following both premises being seized earlier this month by a group who still claim to be the Government, the unelected and self-imposed by the gun, National Salvation Government (NSG) – an extremist heavy and also Muslim Brotherhood influenced entity – which ruled Tripoli and parts of western Libya for a time.

The GNA is widely viewed by most ordinary Libyans as at best ineffective, and at worst divisive and it has been rightly shunned by the eastern-based House of Representatives (HoR) – Libya’s only extant elected parliamentary body. Despite the recent success of the HoR, its government and military arm headed by General Khalifa Haftar, in reopening some of the country’s key oil ports which has seen oil production triple in just two months, according to Bloomberg, yet the West is still throwing its full support behind the GNA, exacerbating an existing east-west divide which increasingly points towards partition. Is that ‘the international community’s’ intention?

They should be reminded that the bulk of Libya’s oil is in the East not the West.

The GNA’s sole achievement to date has been to support the militia-led battle to free Muammar Gaddafi’s former hometown of Sirte from IS occupation but which actually in reality means IS have dispersed around the country and will go to ground for a while. During the course of this months-long battle, the GNA has allowed the UK, US and Italy to gain a military foothold, albeit temporarily, in the country, something which has almost been almost entirely ignored international media yet gives a worrying indication that more international military manoeuvres may be on the cards.

Little wonder then, that the West has such interest in hosting, running and participating in ‘Save Libya’ talks to control their interests and objectives.

Rather than try to work with all Libyan parties, throughout Libya’s disastrous 2016 descent into an abyss, the reaction from the United States and Britain – key architects of the GNA project – has been to double their bets. Last week they gave yet another show of public support to the foundering GNA, hosting these latest rounds of meetings in an apparent attempt to stave off Libya’s economic disaster.

But in Libya itself, the disaster is already in full swing, not just economically but also politically, socially and militarily. The West is aware of how bad it is – after all, western embassies have shunned the country for more than two years, along with most international aid organisations, including those which regularly operate in some of the world’s most dangerous areas of war and crisis. It is deemed so unstable and unsafe that even so called Libyan entities such as the GNA largely operate out of neighbouring Tunisia, raising a central question: To what extent do these so called ministers and MPs attending such conferences really represent the Libyan people?

Is there, in fact, another agenda at play with this latest ‘save Libya’ meeting? US Secretary of State John Kerry attended the London FCO meetings with his ‘Libya’ man Jonathan Winer, prompting a few cynical murmurings about whether it is less about Libya but is rather part of a desperate ongoing attempt to plug the many holes in the dike that is now Hilary Clinton’s presidential campaign. For those of us who are less literary, Hans Brinker wrote a story of Life in Holland based on a novel by American author Mary Mapes Dodge, which was first published in 1865. The book is most notable for popularising the now very famous story of the little Dutch boy who plugs various holes in a dike with his fingers to stop a flood and destruction.

After all, part of Donald Trump’s campaign against Clinton has been to lambast her signal foreign policy adventure – NATO’s 2011 bombing campaign against Muammar Gaddafi – and the suspicious death of their ambassador Chris Stevens as well as the failure of the Obama administration overall to help prevent ‘liberated’ Libya tumbling into chaos. And, chugging away behind all this, is an ongoing and newly opened FBI investigation into the Clintons.

Important senior Libyan officials who wield significant power on the ground are constantly uninvited and therefore absent from such conferences, notably from the democratically-elected governing institutions based in the east of the country, particularly the head of the Libyan National Army (the LNA), Gen Khalifa Haftar.

There can never be any resolution to Libya’s problems if the East is excluded.

Last weeks FCO bash produced nothing except more media propaganda, an effort to paper over the ever-widening fissures that run through all aspects of Libya. And perhaps also a second agenda that that might just last long enough for Clinton’s many London friends to see her through Election Day on 8th November.

The international community has already wreaked enough damage on Libya. It is about time for the country to claw back its power and autonomy and make steps towards deciding its own fate. These external meetings, which seem to promote every country’s interests except Libya’s own, should be phased out and Libya’s many leaders and key players from both East and West, should start focusing on finding in-country solutions, with rival politicians – the exceptions being former AQ-LIFG terrorist members and the rather secretive Muslim Brotherhood – actually only Libyans meeting each other in their own country to strive for a type of RSA post apartheid Truth & Reconciliation Commission that could start to bond all the Libyan people can succeed. Such a Truth & Reconciliation Commission should even include the tribes that supported Gaddafi. Why not?

ALL Libyans need to come together before the country finally disintegrates.

Did the wrong guy get the axe in that picture?