Is it health care?

Is it national security?

Is it global warming?

Or is it none of those but instead much deeper?

I shall here argue the latter.

To win is not merely to defeat “the enemy.” America now has lots of experience with winning battles, only to lose wars.

And, politically, Democrats in 2008 won the battle against the Republicans by placing Barack Obama into the White House. And what did he actually do? The first thing he did is immediately to terminate his campaigning for a public option as being part of his health-care plan, and the second thing he did was to appoint Wall Streeters to bail out Wall Street and also to virtually terminate prosecuting financial crimes.

Democrats won the battle, but lost the war.

In 2016, Democrats nominated the neoconservative Hillary Clinton in order to move the Party even farther to the right, only to find themselves winning California by the astronomical margin of 4,269,978 votes more than Trump received, and losing all other 49 states by the still-substantial margin of 1,405,002 votes to Hillary. She would have become the President of the U.S. who was massively chosen by Californians, but losing to the entire rest of the nation. Democrats think that that would have been ‘democracy’? (Democrats predominantly don’t understand why the Constitution was written the way it is, and propose that ‘democracy’ would mean eliminating the Electoral College and going straight for a single nationwide popular-vote majority to appoint the U.S. President, which would have meant that America would have become ruled for four years by California’s choice — the very same state that had chosen the far-right original, Ronald Reagan, to lead it during 1967-74, and so we had President Reagan from 1980 to 1988. Partisan thinking tends to make suckers of voters, and conservatism always wins in that way, even if the Democratic Party’s version, called “liberalism” — the mixture of conservatism and progressivism — to distinguish it against progressivism, is the winner, against progressivism; against real democracy, which is neither conservative nor liberal, both of which are elitist.)

Right now, the “win at any cost” candidates are Bloomberg, Buttigieg, and Biden. They are the unapologetic Republicrats in this race to get the Democratic Party’s nomination. Elizabeth Warren is the sometimes-apologetic, sometimes unapologetic, Republicratic candidate. And Bernie Sanders is the unapologetic progressive in it. Democrats who voted for Hillary Clinton against Bernie Sanders in 2016 will worry “But will he beat Trump?” Regardless of whether they vote for Bloomberg or Buttigieg or Biden or Warren, they will choose to lose the war. They won’t even fight to win it, actually — that’s the reason why they will be voting for those candidates, as they did for Hillary in 2016.

The top issue for Democratic voters is whether they are in this to win the battle, or to win the war (quoting now contrasting reader-comments at one popular Democratic Party site on February 11th):

“In 2016 Bloomberg spent 12 million to help incumbent GOP Senator Pat Toomey. His opponent was Katie McGinty, who lost by a very narrow margin. If she had won, Brett Kavanaugh wouldn’t be on the Supreme Court. Take a look at Toomey’s right-wing policies and weep.” Alexandro Rocca, at Huffington Post.

But there’s also this, from a capitulationist, to win-at-any-cost (win the battle even though it will greatly increase the likelihood of losing the war):

“If Bloomberg can beat Trump, I’m all in.  Keeping my eye on the real goal, here.  What good is winning a debate if you lose the election?” Gregory Ramos at Huffington Post

Here is another way to put this same matter, of decision for Democratic Party voters:

The top issue for Democratic voters is actually whether the post-9/11, post police-state, totalitarian billionaires-controlled U.S. Government, needs to be replaced (a second American “revolution,” now, to restore at least the incomplete democracy that pre-existed 9/11), or, instead, needs to become ‘more bipartisan’? Though the phrasing here is different, the choice here is actually the same: either capitulate now (be ‘bipartisan’ in order to ‘defeat Trump’), or never stop fighting until we win the war to actually restore democracy to America.

And THAT is The Top Issue for Democratic Voters.

Hillary Clinton lost in 2016 because of the millions of stay-at-home Obama voters and even some Trump-over-Hillary Obama voters who refused to vote for the neocon and blatant Wall-Street-shill Hillary. It could happen again, and only the personal identity of the neocon and shill would be different. (As for Democrats who don’t understand what a neocon or shill even is, they’d do both the Party and the nation a favor by entirely avoiding to vote, at all, and letting the Party’s progressives take over the Party, so as to win the war, to restore democracy to America and advance it further in the progressive direction.)

This is a warning to the capitulationist ‘Democrats’, but it doesn’t originate from me; it originates from us (as that last link shows).

Joe Biden’s campaign self-destructed on February 11th, in his town hall at New Hampshire’s Mercer University, but do the ‘moderate Democrats’ now want to hand their mantle over to a late-comer to the contest such as Michael Bloomberg, who is untested by the prior year’s campaigning and now trying to buy his way through to the nomination by fooling enough people to vote against Bernie Sanders, with the help of the obviously corrupt DNC? Or maybe the previous Wall Street favorite, Pete Buttigieg? Why don’t the ‘moderate Democrats’ just give up and quit trying to keep BOTH Parties in Wall Street’s grip? Do they really think that billionaires should control the U.S. Government? Or, will that now be The Top Issue, for Democratic Voters?

Dems are Deplorables too

I wish I’d snapped a pic today……found myself behind a pickup with big letters in the rear window, calling (yes, really) Trump a f_cking turd and time to do what you do with f_cking turds and flush it down the toilet. Then I noticed the bumper sticker “Vote Democrat” (i.e. any democrat would do). So, you see….the civil war is truly kicking into high gear.

I wish I’d snapped that pic. I’d have posted it on the internet with the caption “Dems are Deplorables Too”. LOL

oldandjaded
Reply to  Dems are Deplorables too

Well yes, that’s great, FWIW, I am a Trump supporter too. But what on gods green earth does that have to do with the thread topic?

Dems are Deplorables too
Reply to  oldandjaded

Who said I was a Trump supporter? The comment is peripheral to rigid minds, generic of the dismal state of polarity in politics, spearheaded lately by the DNC. Besides, your comments are often so peripheral to the subject that one wonders what solar system they orbit in. ‘Nuff said.

Olivia Kroth
Reply to  Dems are Deplorables too

The entity you are answering here is orbiting in his own juice. An old fool with no brains left, but still able to type. A waste of time to converse with him.

….the top issue may very well be to keep another budding psychopath away from deadly toys of mass destruction. Anyone seen this? Same Pete Buttigieg? 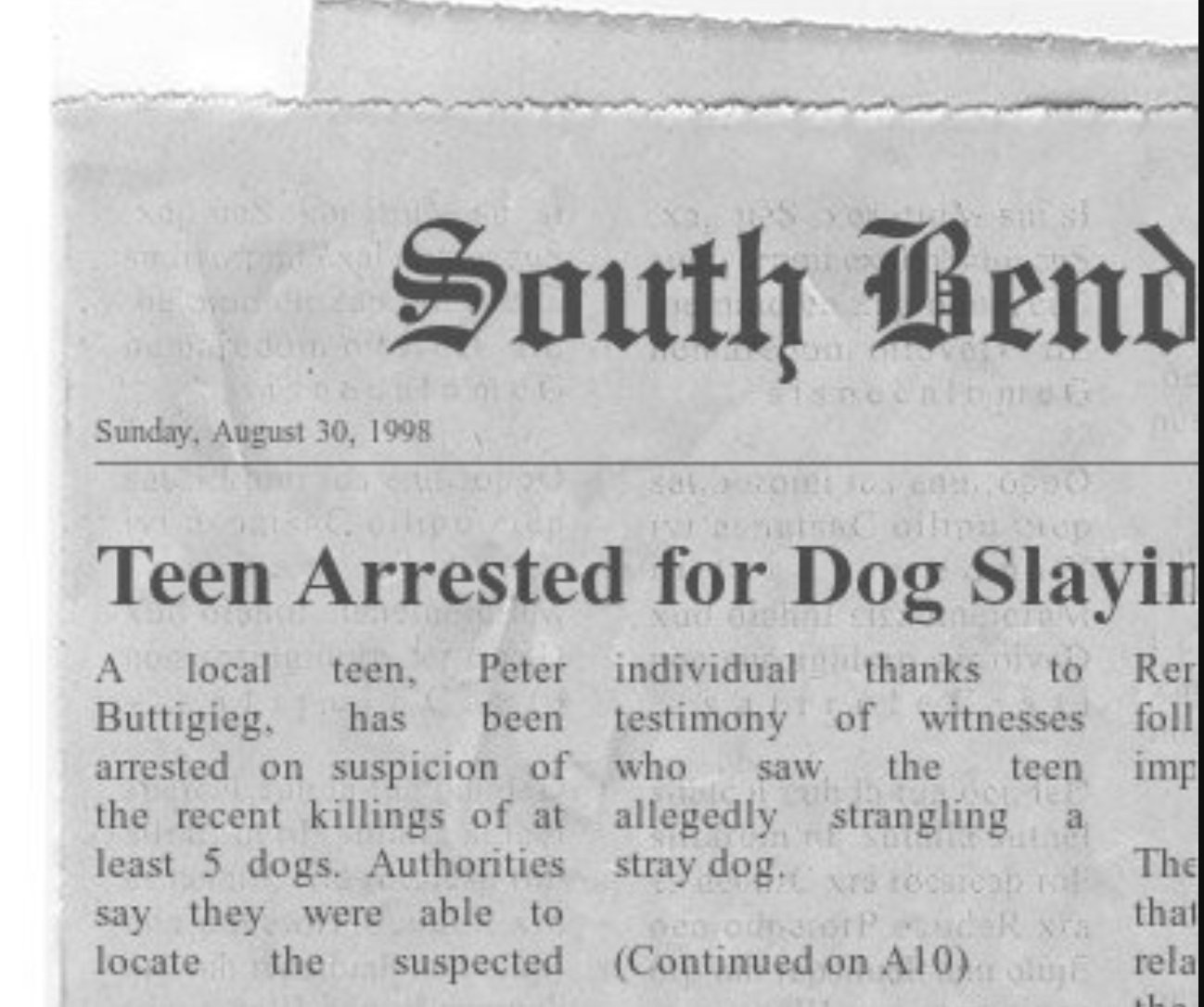 Well, Snopes says it’s fake, generated with “The Newspaper Clipping Generator”. Guess it has to be true that it’s fake since the paper’s archives are readily available. Sorry to jump the gun. Buttigieg has enough legitimate detractors, without this. BTW: It could just as well be his supporters that put this out, in order to sow doubt on any negative article about him. That’s become an interesting tactic these past few years, borrowed from you know what agency that also BTW, he has a history with.

What the heck’s this world coming to?