While reading into the internal political decisions of North Korea is far from easy, one gets a decidedly better perspective when one assesses North Korean decisions in a broader regional context.

Today’s apparent subterranean detention of a nuclear weapon by Pyongyang, a weapon which is widely thought to be a hydrogen bomb, coincides with the commencement of the 9th annual BRICS Summit in Xiamen, China.

The location of Xiamen vis-a-vis Pyongyang is shown on the map below. 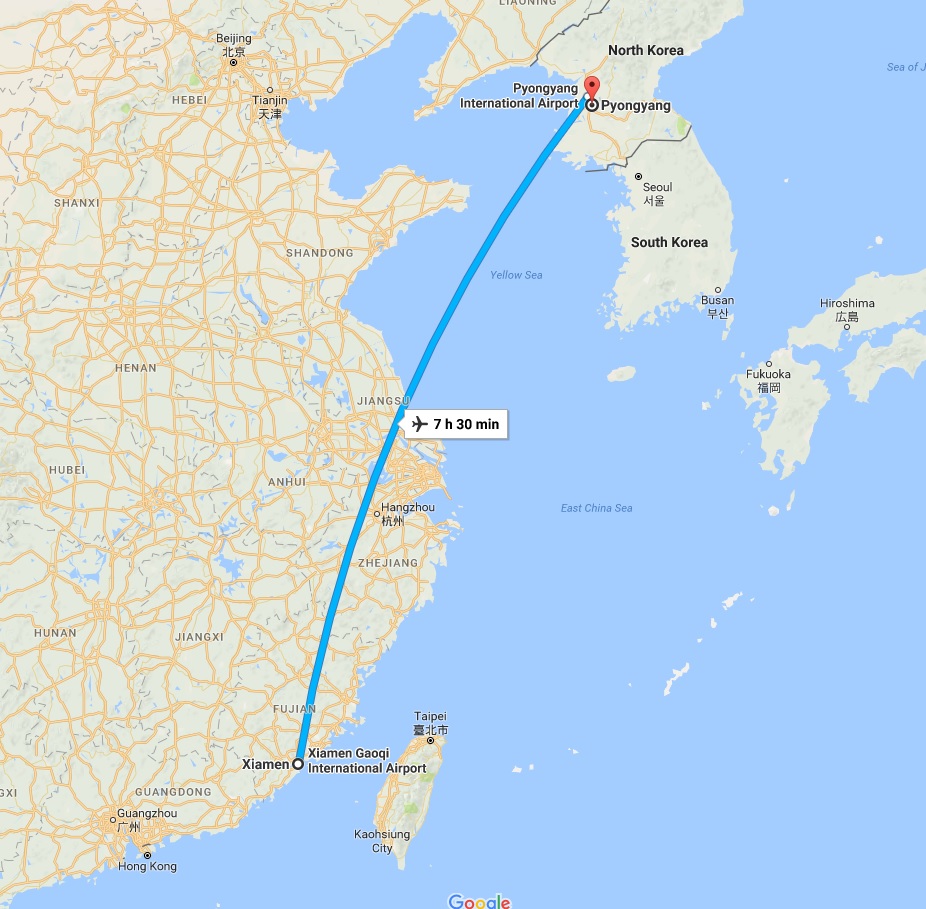 While the BRICS summit is primarily concerned with financial, monetary and trade issues, geo-political issues are inevitably touched upon. This year in particular, with the border disputes between India and China resulting in a summer-long stand-off in the Doklam/Donglang region, the summit is seen as a place to test the extent to which India is willing to engage in dialogue over the matter with China after previously refusing to do so for months.

Many have commented that the proximate timing of India’s withdrawal of troops from Doklam/Donglang and the beginning of the BRICS summit was a calculated move to ease potential awkwardness at a summit aimed at increasing cooperation between BRICS member states which include, Brazil, Russia, India, China and South Africa.

The North Korean issue was always likely to come up in some capacity, but this would have generally been peripheral to the dispute between two BRICS members (India and China).

Now however, due to North Korea’s nuclear test, the issues surrounding the Korean peninsula will almost certainly play a significant part in the discussions.

Is this what Pyongyang intended?

Either by coincidence or by design, the proximate timing of the nuclear test to the start of the BRICS summit means that the Korean ball is now very much in the BRICS court, especially when it comes to North Korea’s neighbours China and Russia who are the leading members of BRICS.

While a US attack on North Korea has always been unlikely, in spite of the disorganisation and inexperience of the Trump White House, with the leaders of the BRICS meeting in a neighbouring state, it is more or less certain that the US wouldn’t make any significant moves on the Korean peninsula at such a time.

This gives the BRICS a chance to make a statement on North Korea that could help instigate an early stage peace process, one that would be authored by countries that generally have a more trust based relationship with Pyongyang vis-a-vis the United States.

Such a thing could ironically help draw India into the fold as while India has disputes with China and remains on historically cordial terms with Russia, New Delhi has generally taken little interest to the Korean issue as it does not directly affect India. That being said, India has always enjoyed vastly better relations with North Korea than most western allied states in Asia and beyond, particularly where trade is concerned. India could also help lessen the controversy of its own nuclear weapons programme by showing a willingness to engage in a multi-lateral discussion on reducing tensions in a situation involving nuclear weapons.

While a nuclear test conducted by North Korea would clearly take time to plan, the date of the BRICS summit has been known for long enough that it would have allowed Pyongyang time to plan such a test to coincide with it.

Furthermore, with the US breaking international law in respect of raiding Russian diplomatic properties, Russia will if anything be more keen to demonstrate to the world, just how little the US is needed to interfere in the affairs of Asian and Eurasian countries.

This is therefore a golden opportunity for the BRICS and North Korea to meet half way and in doing so, the BRICS could also ideally satisfy the concerns of Seoul, all without allowing America to dictate the nature of events.

It could be a clever way to turn a potentially dangerous situation into a cautious win-win situation.

Lets hope cool heads prevail and such a win-win situation can be brought about.

Without new direct discussions for peace between the two Koreas, the situation remains highly volatile and dangerous. Actually, there is NO military option to solve the problem. Any military incursion would mean the destruction of BOTH Koreas and a lethal danger for the 200,000 Americans present in the South, and Korea’s neighbors China, Russia and Japan.

So, which ‘Americans’ are you referring to?

Re: “So, which ‘Americans’ are you referring to?” The realistic ones: Steve Bannon Isn’t Going Away by Walter Russell Mead, Hudson Institute Fellow (https://www.hudson.org/about/history) (Fat Man: Herman Kahn and the nuclear age, https://www.newyorker.com/magazine/2005/06/27/fat-man) 22 Aug ’17 Wall Street Journal (excerpted) “President Trump’s highest officials remain committed, one way or another, to defending the global order the US has been building since the Truman era. That includes Secretary of State Rex Tillerson, Defense Secretary Jim Mattis, Chief of Staff John Kelly and national security adviser General HR McMaster. These men share a disdain for the Obama administration’s retrenchment and retreat, though… Read more »

Perhaps. A mature and calming statement from the BRICS supporting the double freeze plan would be fine.
But your map suggests a better idea; instead of flying home after the BRICS if Lavrov and the Chinese FM took that flight together to meet Kim it would have huge impact, and get the ball rolling on dialogue.
They could follow up by going to Seoul to see Moon, perhaps symbolically crossing the land border.
It would be the adults stepping in. Whist the US bully sulks in a corner.

It is time for bold initiatives by the BRICS or the NK situation could easily get out of hand. Perhaps, they are the only grouping that can initiate an end to the Korean War, finally. Why should the world wait for the madmen that control the US/EU/NATO/Japan/SK axis?

Soon the only power remaining to the US will be the power to kill and destroy. And their karma is already among the worst in history. It is hard to believe that the death of the Anglo-Zionist Empire will be a painless one.

The only thing that will stop the US is when the USD is no longer a reserve currency.
Until then, the rest of the world will continue to finance their own destruction.
$20 trillion and counting. Amazing no one can see this ponzi scheme.