Partially declassified documents from the Central Intelligence Agency on the events of December 1989 in Romania and subsequent developments in January 1990 reveal that the group who killed Ceausescu and took over the state, the FSN [The National Salvation Front], could no longer hide its lack of credibility and internal dissensions. In the CIA document, dated 27th of January 1990, “President Iliescu admitted on Thursday that the political situation is unstable, warning that anarchy could follow if the provisory government were to fall.”

Another CIA report, dated January 30th 1990, [via Mediafax] announced the return of the Securitate. “The anti-regime demonstrations push the FSN, currently in power, to make recourse to Ceausescu’s merciless political police. Note: The present low profile of the Securitate will change if, and it’s probable, the FSN continues to be the target of attacks, for its half-measures on democratic reforms. The utilization of Securitate personnel in limiting the protests amplify the likelihood that anti-government demonstrations will turn violent. As in the case of Ceausescu’s ouster, the Romanian army may play a key role in the FSN’s survival.”

An older, partially declassified CIA document, from March 4th 1982, titled “Unrest in Romania: Causes and implications,” analyzed how Ceausescu’s administration was undermined by “dogmatic” internal policies, “economic stagnation and growing unrest,” and named key players who might have replaced Ceausescu in the event of a “forced succession.” This short list formed Nicolae Ceausescu’s so-called “inner guard” and it included Emil Bobu, then Deputy Premier, Elena Ceausescu, the head of state’s wife and the Permanent Bureau First Deputy Prime Minister, Iosif Blanc, Permanent Bureau Secretary of the Cadres, and Ion Coman, Secretary for Military and Security Affairs.

A third group, identified as “rivals in eclipse” included individuals who were on the political decline [not favored by the current regime], but capable of playing “major roles in inspiring a move against Ceausescu.” These were Virgil Trofin, who criticized Ceausescu’s “personality cult and autocratic policies,” Paul Niculescu, a Chairman of the Central Union of Consumer Cooperatives, and Ion Iliescu, then a Chairman of the National Council for Water Resources. Iliescu, who went on to become Romania’s President after Ceausescu’s downfall and execution [assassination in truth] in 1989, was characterized in the CIA document as “bright, dynamic and unusually candid” and noted “his youth, ability and continuing popularity with many members of the bureaucracy suggest he would be an important figure in a post-Ceausescu leadership.” From the confessions of those close to the pro and anti Ceausescu camps, we learned that his [forced] departure was planned more seriously beginning with 1986. A famous conspirator was Silviu Brucan, a very intelligent individual, who, coincidentally [?] met with George Soros immediately after Ceausescu’s fall, at the GDS [Group for Social Dialog] in January 1990. 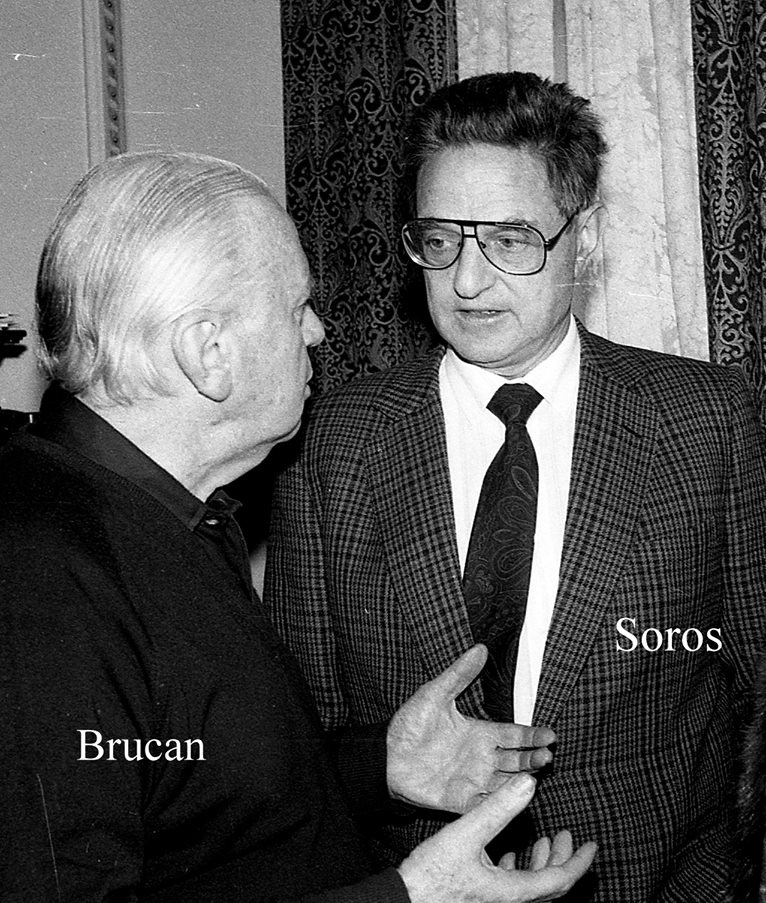 During the 1980s, Ceausescu and his toxic wife [that’s how virtually all witnesses and historians qualify the woman’s influence on him and on state affairs] were heavily off in fantasy land, living comfortably in a bubble like the aristos of old, believing they had the love of the people and no rival. Meanwhile, large sections of Romania’s working classes were suffering from shortages of food, basic materials, and deteriorating public services.

In his youth, Ion Iliescu completed his education at the Moscow University’s Energy Institute. Like other politicians in the Romanian landscape, de facto speaking, Iliescu had a double fealty, to Romania and to the Soviet Union. Many people back in ’89 up to the present condemn him as a traitor and Moscow agent. The truth, however, is most ironic. Iliescu ended up being a triple agent, with his final fealty pledged to Washington. It was under Iliescu’s regime that the moves toward NATO and the European Union began; and Romania became part of NATO under the social democrat regime [the duo of president Iliescu and premier Nastase].

Gorbachev had no love for Ceausescu, and vice-versa. Ceausescu’s brutal austerity policies, for which the IMF had given its blessing, knowing full well the human cost, collapsed his popularity among grassroots, while the state’s foreign commerce enterprises piled up moneys in foreign currency [both cash and credit]. The privileged nomenclature wanted to use that money to bring inside luxury items from abroad. Ceausescu’s opposition to Perestroika, to Soviet meddling in Romanian internal affairs [for he believed the Soviets were out to get him], made him a target to the political opportunists around him. Ceausescu’s usefulness for Washington had run its course. Both Moscow and Washington had agreed to new, post-communist/post-soviet terms. Tragically for Romania, though, the old crooks [who rebranded themselves as democrats], the shadow state if you will, couldn’t secure power in a velvet type revolution. They had to employ fake news, plus state [and paramilitary] terrorism. Live rounds had to be fired, and innocent people, civilians and soldiers, had to be killed and maimed – because the actual revolution had to be confiscated and confiscated it was.

Inside Romania’s CIA Torture prison! This is not the 20th century, but the 21st! US export of “democracy” worldwide has reached even the most backward little country of Eastern Europe.

Romania has always had fascist tendencies: In the Second World War Romanians invaded the Soviet Union as Hitler’s auxiliary troops. Now the Romanian Government is “best friend” of the CIA. Phui!

From WIKIPEDIA: On 22 June 1941, Nazi Wehrmacht with Romanian support attacked the Soviet Union. Nazi and Romanian units conquered Bessarabia, Odessa, and Sevastopol, then marched eastward across the Russian steppes toward Stalingrad. Fascist Romania welcomed the war because they were allies with the Nazi Third Reich. In a morbid competition with Hungary to curry Hitler’s favor and hoping to regain northern Transylvania, fascist Romania mustered more combat troops for the Nazi war effort than all of Germany’s other allies combined. Hitler rewarded fascist Romania’s loyalty by returning Bessarabia and northern Bukovina and by allowing fascist Romania to annex Soviet… Read more »