Serial numbers of missile that downed MH17 show it was owned by Ukraine – MoD.

There are two serial numbers found on fragments of the missile, which shot down the passenger airliner in June 2014 according to an international team of investigators led by the Netherlands. The numbers were marked on the engine and the nozzle of the missile.

The Russian military on Monday said they had traced them to a missile which had the producer serial number 8868720.

Speaking to journalists, Gen. Nikolay Parshin showed a document trail of the Buk missile. According to the documents, some of which have been declassified for the presentation, it was produced at a military plant in Dolgoprudny in the Moscow region in 1986.

The missile was shipped from the plant on December 29, 1986 and delivered to military unit 20152 located in what is now Ukraine. It is now called 223rd anti-aircraft defense regiment of the Ukrainian armed forces, the report said. The unit took part in Kiev’s crackdown on rebels in eastern Ukraine in June 2014, the general said.

The evidence disproves the accusations by Ukraine and some other parties, which claim that a missile fired by a launcher, secretly delivered from Russia, was responsible for the downing of MH17, the Ministry of Defense report said. All the materials have been sent to the Dutch investigators, the Russian military added.

The Russian military also challenges video footage used by the UK-based group Bellingcat, which calls itself a citizen journalism organization, to back its allegations about the delivery of the Buk launcher from Russia. The Defense Ministry showed a video clip with some of the footage, highlighting inconsistencies, which it said proved that the footage had been manipulated to place images of the launcher into background which were not in the original.

The Bellingcat investigation was featured in the latest update by Dutch prosecutors involved in the MH17 investigation, prompting the Russian military to study it in detail, they said. The Russian video showed an example of how an Abrams tank can be shown to be carried by a trailer in the streets of Ukraine in the same way.

The third part of the presentation was what the Russian officials called a record of intercepted communications of Ukrainian officials discussing, in 2016, the risk of flying through restricted airspace over Ukraine. Among a barrage of complaints one phrase says unless the restrictions are respected “we’ll f***ing f**k up another Malaysian Boeing”.

The Russian military say the complaints came from Col. Ruslan Grinchak, who serves in a brigade responsible for radar control of the Ukrainian airspace. His unit tracked the MH17 flight in 2014, so he may have information which is not publicly available about the disaster.

Gen. Igor Konashenkov, who hosted the briefing, said that Ukraine failed to provide radar data from its stations to the Dutch investigators. He also suggested that archive documents from the Ukrainian unit, which received the Buk missile back in 1986, would be of use to the probe, unless Kiev claims that they are no longer available. He stressed rules are in place which mean that such documents should still be stored in Ukraine.

The Russian military said they had no evidence to disprove a scenario, involving the Ukrainian rebels capturing the missile from the Ukrainian army, but pointed out that Ukrainian officials publicly denied anything like this had ever happened.

Malaysian Airlines flight MH17 was shot down over eastern Ukraine on July 17, 2014, falling in the rebel-held part of the country. The crash claimed the lives of 283 passengers and 15 crew members, most of them Dutch nationals. Russia was blamed by Western media in the first days after the tragedy, even before any evidence had been collected on the ground.

The Joint Investigation Team, which is lead by the Netherlands, includes Ukraine, but not Russia. Moscow believes that the investigation is biased, failing to obtain all necessary evidence from Ukraine and relying on questionable sources while ignoring evidence provided by Russia, which doesn’t fit the theory favored by Kiev.

Facts don’t count a bit for US/NATO-Mafia + their Serfs/Slaves/Minions, if it don’t fit their view, narrative + perception of reality.

RUSSIA DOWNED MH17, AS PROVEN BY ALL EVIDENCE. THE KURSK BRIGADE WAS EVEN AWARDED FOR IT BY PUTIN. THE TRIAL AGAINST RUSSIA FOR DOWNING MH17 STARTS IN 2020.

Proven by “ALL” evidence??? Are you a Kangaroo??? That apparently is the type of court you swear by!!!

Russia vetoed even an International Court for MH17.

You and your criminal friends have a term for MH17: collateral damage, so what the fuss is all about?

No, they refused to allow the US to create a witch-hunt under the UN banner, controlled by NATO-appointed assets to deliver a pre-determined political payload.

More lying Bs! All the evidence points to the Ukronazi army, which is the only entity which possessed BUKs in the region.

The Russian Army in Russia occupied Donbass has 160 BUKsystems since the invasion in 2014.

They Knew
Reply to  A.F.

Which evidence? The Dutch Safety Board even falsified evidence with the reconstruction of MH-17.

A.F.
Reply to  They Knew

Russia refused for 4 years to show any evidence, ,,,,,,,,,,The BUK was registered at Kursk in Russia.

They Knew
Reply to  A.F.

There wasn’t a BUK! The Dutch Safety Board falsified evidence during the reconstruction. I gave the proof above.

Congrats!!! You win this years award for the Most Stupid Banderite Inbred!!!

To collect your reward, you’ll need to head down to the front against the Heroic Defenders of Free Donbass and enlist to take your turn as meat for the grinder. Die with some dignity, Ukropi orc.

Well, I have some disturbing news for the Dutch Safety Board, JIT team, Dutch Government, and Dutch MEANstream media.

They all kept silent about article 57, section 2, of the Dutch Kingdom Act, which says;

“All the information, forthcoming out of an investigation, which will harm the relationship between “The Crown” and a friendly nation, shall be withheld from the report.”

So, if Almaz-Antey handed over some information that the BUK missile couldn’t be launched from rebel held area, but from Ukraine occupied territory instead, this information will not see the light of day.

They Knew
Reply to  They Knew

Search for the diffrences! Why did the Dutch Safety Board used another cockpit panel during the reconstruction of MH-17? 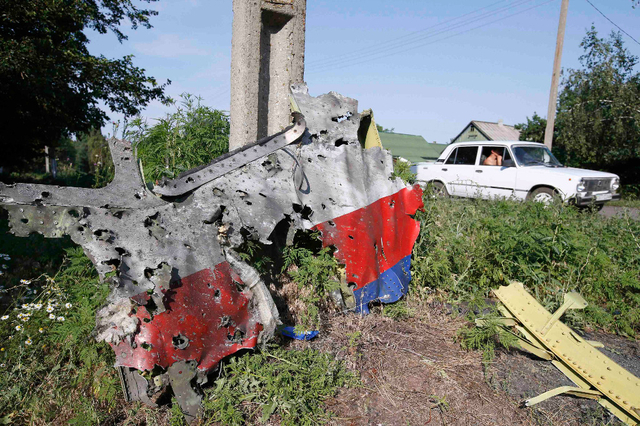 ruca
Reply to  They Knew

Yeah no mention of 30mm cannon holes in the report. A-holes

I hope that after this clearly shown fake, no one will believe Bellingcat any more. But I suppose US and British secret services still need Bellingcat in cases in which they cannot produce good fakes – then, they support Bellingcat‘s bad fakes and still can claim it wasn’t them when the fakes are too obvious.

looks like JIt dropped the ball by showing this so called evidence
i always thought that that BuK missile lookd suspiciously good for having exploded and then falling from 10.000feet
looked more like something thy pulled out of a scrapyard

The serial numbers indicate the BUK fragments displayed by the Ukis came from a missile made in the USSR in 1986. That does not mean that it was used to shoot down MH17. It means that since the official BUK narrative began almost from the moment of the crash, that BUK fragments had to be trotted out as “evidence” eventually. Unfortunately for the Ukis they were dumb enough to display the side with the serial numbers clearly visible. I still hold to the fighter jet theory, which is that MH17 was disabled by an air-to-air missile, and as it fell… Read more »

Video exists of a ‘EUkrainian’ anti-aircraft unit commander surrendering his unit and their equipment to the dissident forces. I have seen that. Formerly on Militaryphotos.org (Ukraine thread)

It isn’t known what kind of unit he commanded or with what they were equipped. Somebody used something to drop at least two high-flying Ukrainian aircraft.

Who is in possession of the Buk parts?

There exists a video of a ‘EUkrainian’ anti-aircraft unit CO surrendering his unit and its equipment o the dissident forces. I have seen that on the former Militaryphotos.net site (Ukraine thread) . That site is archived.

It wasn’t clear what kind of AA unit it was, or with what it as equipped. But somebody used something to drop at least two high-flying EUkrainian aircraft in the days preceding MH17.

The parallel incisions in the left wing can only have been made by the stabilizer fins of an air to air missile. There should have been hundreds of pieces of BUK shrapnel. The few pieces that were found were planted. The cockpit was riddled with 30 mm cannon shells. This BUK stuff is nonsense. Washington and London are hiding the technical data because it reveals the Ukrainian Sukhoi that shot down MH17.

OLd news – we know that corrupt murderous Kiev and their depraved Zio-Western global-traitor backers were always behind this perverted crime.

Posting....
wpDiscuz
27
0
Would love your thoughts, please comment.x
()
x
| Reply
Send this to a friend