While a Senate delegation is in Moscow preparing for an upcoming meeting between US President Donald Trump and Russian President Vladimir Putin, the Senate Intelligence Committee is releasing a report on the findings of the intelligence community on an investigation into alleged Russian meddling in the US presidential election of 2016.

That report relies on findings, or rather assertions, of intelligence personnel due to the fact that the actual findings and evidences are classified information, so the Senate has decided to take the intelligence community at its word that its findings conclusively show that Russia meddled in the election and that this meddling campaign came at the direct orders of the Russian President himself.

The US Senate Intelligence Committee said Tuesday that it agrees with the Intelligence Community Assessment (ICA) from January 2017 that Russia interfered in the 2016 US election and that President Vladimir Putin personally approved the meddling campaign, despite admitting that it didn’t have access to the sensitive data underpinning the report.

“The ICA [Intelligence Community Assessment] is a sound intelligence product,” the committee said in its report. “The Committee concurs with intelligence and open-source assessments that this influence campaign was approved by President Putin.”

The ICA mentioned Russian-funded media outlets RT and Sputnik News as having “contributed to the influence campaign by serving as a platform for Kremlin messaging to Russian and international audiences.” The Senate report found, however, that the ICA only provided a summary of Russian state media operations in 2012, failing to provide an updated assessment of Russian media “capability” in 2016.

“The ICA provides a summary of Russian state media operations in 2012,” the Senate report notes, though it fails to explain how this would be relevant to alleged meddling in 2016, the time the report is intended to cover. It called this lapse a “shortcoming.”

The committee also came to its conclusion without access to much of the data the ICA supposedly relied on, acknowledging on the second page that “the Committee had to rely on agencies that the sensitive information and accesses had been accurately reported.” The Senate committee seems to have come to its conclusions that the ICA report was accurate by simply asking the drafters of the ICA report if it was accurate.

As some recall, the ICA was written by “hand-selected” analysts, as former Director of National Intelligence James Clapper told Congress in May 2017. These analysts were selected while President Barack Obama, an ally of defeated election candidate Hillary Clinton, completed the final weeks of his presidency.

Even though the CIA, NSA and FBI are supposed to be focused on American national security and law enforcement, the ICA reached a remarkably unified conclusion on a politically radioactive subject without so much as a single dissenting view, raising questions about potential bias and improper influence on the part of its authors.

Congress, as well as special counsel Robert Mueller, have been investigating alleged Russian interference in the US election and alleged Russian collusion with US President Donald Trump’s election campaign for 14 months now. Mueller’s investigation has generated a number of indictments, notably of Paul Manafort, briefly Trump’s campaign manager, and his associate Rick Gates, all having to do with financial fraud and conspiracy to cover up such fraud well before the US election. Indictments were also handed out to the operators of a private Russian “troll farm” for allegedly using false online personas to promote Trump’s candidacy. No links between theses individuals and the Russian government have been made public, and Moscow has consistently denied meddling in the US election and colluding with any candidate.

The content of the material which was used by the Russians to meddle in the elections is and was clearly publicly available material, in order to have had any influence on the American voter. But the intelligence community says that that evidence is classified, so that the Senate just has to be content with the fact that the intelligence agencies are above the bar in their assertions. What the Senate Intel Committee was allowed to purview was content published by Sputnik and RT from 2012, which is being lodged as somehow affecting the outcome of an election that didn’t happen for another four years, and before Trump was even in the extensive lineup of Republican candidates for the Presidency in 2016.

Even though no real evidence conclusively showing that Russia meddled in the 2016 election has come forward, the American media, intelligence community, and Senate Intelligence Community are sticking with the allegations, despite the political liabilities attached to it. Why has the Senate put itself at odds with the house? Why would they do something that effectively delegitimizes themselves when many of them ran on the coattails of Trump?

How on earth can a bunch of ignorant career politicians have an informed opinion about highly technical intelligence work?

I am reminded of the excuse often given by politicians when confronted by the fact that they have given incorrect “health” advice. “We took the best medical advice”.

But since they have no medical knowledge at all, how can they distinguish between good and bad medical advice? (Hint: the man with the peerage is NOT necessarily the better, or more honest, doctor).

This sounds like a dirty attempt by the Deep State to disrupt the Putin/Trump meeting in Finland. Why else would these clowns pull out something as incredulous as the ICA report and expect the American people to accept it as legit. These are some really dirty people.

We need to keep an eye on the senate delegation sent to Moscow to supposedly “prepare” for the meeting. They could easily sabotage the meeting if they’re not watched closely. But, I expect Trump knows that., as does Putin.

the words “senate” and “intelligence” should never be used together in a sentence.

How much has it cost the US tax payer to come up with 13 Russian trolls?

How much has it cost to the US tax payer to fund their regime change programme? 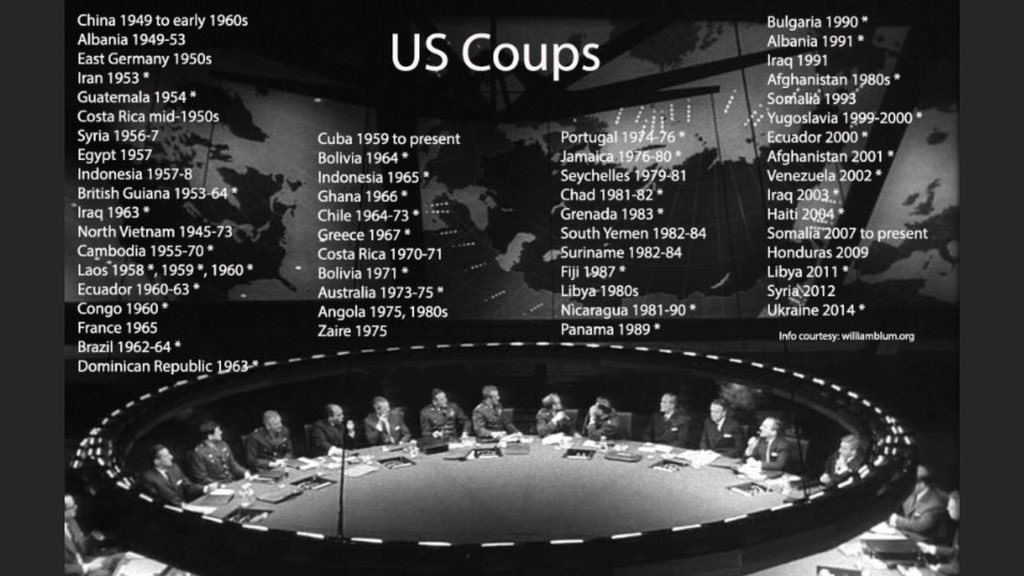 Why can the US interfere in the elections of others, but, freak out, when 13 Russian trolls take a dislike to Clinton. Who funded those Russian trolls?

A Brief History of the “Kremlin Trolls”… https://thesaker.is/a-brief-history-of-the-kremlin-trolls/