An embarrassing gaffe has severely compromised NATO defense security and readiness after a public document inadvertently revealed too much. 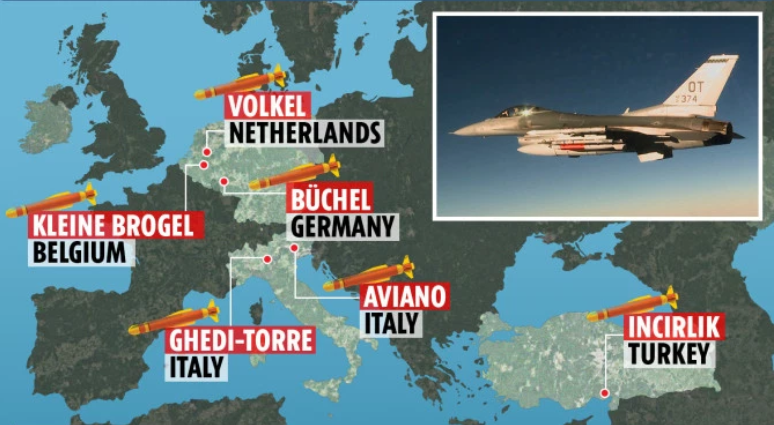 Though the leaked information was quickly deleted after it came to the attention of NATO officials, the Belgian newspaper De Morgen picked up on the mistake, after which its reporting went viral. The Belgian headline in De Morgen stated: “Finally in black and white: There are American nuclear weapons in Belgium.”

The document revealed secretive information related to the locations of some 150 US nuclear weapons at various bases, “specifically B61 gravity bombs.”

“These bombs are stored at six US and European bases — Kleine Brogel in Belgium, Büchel in Germany, Aviano and Ghedi-Torre in Italy, Volkel in The Netherlands, and Incirlik in Turkey.”

The sanitized version of the final edition of the document was republished last week, with the nuclear weapons site information deleted.

Interestingly, Italy is estimated to maintain the largest stockpile of US nuclear bombs – somewhere between 60 and 70 – with Turkey and Germany also housing a large amount, which is worrisome in the case of Turkey given rising tensions over its Russian S-400 deal.

Such an extensive US nuclear arsenal on European soil is a remnant and continuation of the historic Cold War build-up, when Washington was locked in battle to deter Soviet expansion in Europe, which also allowed US allies to not have to pursue their own nukes. 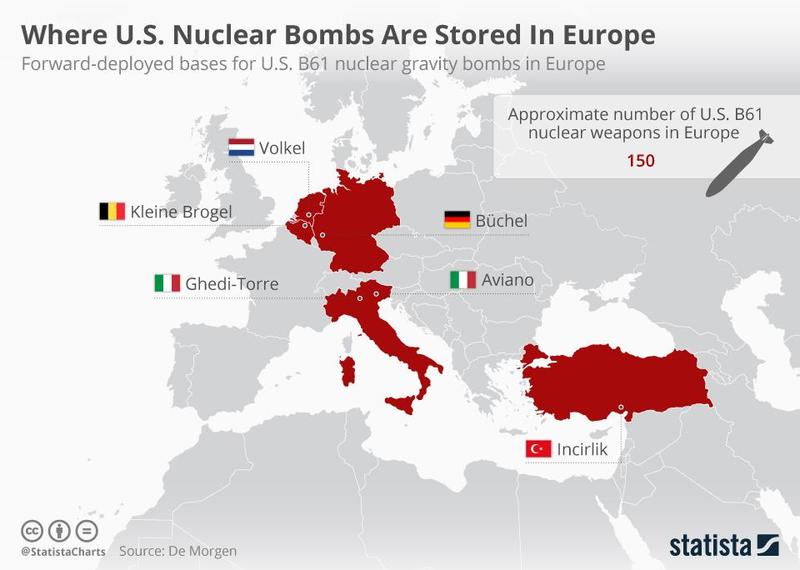 Via Statista: “The B61 is a low to intermediate-yield strategic and tactical thermonuclear gravity bomb which deatures a two-stage radiation implosion design. It is capable of being deployed on a range of aircraft such as the F-15E, F-16 and Tornado. It can be released at speeds up to Mach 2 and dropped as low as 50 feet where it features a 31 second delay to allow the delivery aircraft to escape the blast radius.”

European newspapers this week ran shocking and alarming headlines over the revelation. Indeed it reveals a dangerous situation given the recent collapse of one crucial Cold War era treaty which kept warhead delivery systems and missiles out of Europe, the Intermediate-Range Nuclear Forces Treaty (INF).

According to a NATO official statement in The Washington Post, the document did not originate within NATO itself, but by the group’s parliamentary assembly, specifically from one of the alliance’s founding members, Canada. The NATO statement to the Post said, “We do not comment on the details of Nato’s nuclear posture.”

So the US as usual was in fact doing what it claims Russia was, in this instance violating the INF treaty.

Russia and Putin vindicated again. Good thing Americans will never hear about it from their masked media.
The mass hanging of all politicians in Washington will be delayed a bit longer.

US off the planet! Now!
Quarantine the USraeli Empire.

So, you think it was accidental, huh?

NATO should take advantage of reality and finance a remake of the Lord of the Rings with this Stoltenhoffer (or whatever the asshole’s name is) as Smeagle.
Look at him! He has been made by God for the role and certainly not for any other purpose. or reason.

Speaking of Canadian Senators.; Their job has been described as a taskless thanks. This guy has made it seem even worse. But then Canadians were predestined to play the role of anus of the Five Eyes + Israel composite Beast.