Russia’s Foreign Minister, Sergey Lavrov has expressed grave concerns regarding US actions in Syria. Following the US carpet bombing of Raqqa, an event which drew heavy criticism from the Russian Defence Ministry, Moscow’s top diplomat wants answers from the US regarding long-term American plans to occupy parts of Syria, as well as answers regarding reports of US forces transporting ISIS terrorists to areas where the Syrian Arab Army is currently fighting existing terrorist pockets.

“When we hear about the new line of the United States, the line, which calls for creation of some local councils on the territory of sovereign Syrian Arab Republic, it most certainly raises questions on our part. We address these questions to Washington and expect to receive an honest and comprehensible answer”.

Sergey Lavrov then turned to the issue of the US and its proxies, allowing apparent safe passage of ISIS fighters from Raqqa into regions of Syria where the Syrian Arab Army and Russia continue to fight terrorists. He stated,

“In particular, there were cases of a mass exodus of ISIS terrorists from Raqqa exactly when the US-led coalition was besieging the city. There were other incidents linked with our American colleagues trying to draw some lines beyond which the Syrian army should not go”.

The answers to these questions are already becoming self-evident. The US apparently looks to set up occupation zones in areas dominated by their proxy militia SDF, a group led by Kurdish YPG fighters. The YPG is effectively working to ethnically and culturally cleanse parts of northern Syria of their Arab populations, this setting the stage for a US propaganda onslaught in favour of synthetic ‘Kurdish regions’.

As geopolitical expert Andrew Korybko said in June of this year,

“There’s no “delicate” way to say it – what’s happening in Raqqa right now is the large-scale ethnic cleansing of the city’s majority-Arab population through chemical weapons and indiscriminate bombing in order to create the on-the-ground conditions for “legitimizing” the expansion of the Kurds’ “federalized” statelet (the “second geopolitical ‘Israel’”). The Mainstream Media is holding back from openly announcing the obvious in a frail attempt to obscure its grand strategic plans until the day arrives when they’re undeniable, but also of course out of the self-interested pursuit to avoid being implicated in worsening the ImmigrantCrisis.

As for most of the Alt-Media, they’re very reluctant to recognize that Russia’s policy of engagement with the Syrian Kurds has totally failed to pry them away from the Pentagon, so there’s a certain degree of wounded pride involved which is taking some time to overcome. Furthermore, by recognizing the US-Kurd campaign in Raqqa as ethnic cleansing, it would put enormous pressure on Russia to stage a “humanitarian intervention”, which to remind the reader, is beyond Moscow’s military mandate and could dangerously draw it into an Afghan-like quagmire and potentially lead to nuclear brinksmanship with the US, both of which the Kremlin will do anything to avoid.

Sadly, what this translates to in reality is that the Arab cleansing of Raqqa will probably go unnoticed in most of the global media, though it might emerge as a politicized subject after the campaign is completed. For now, however, it seems like both the Mainstream and Alternative Medias are content with only discussing the US’ chemical weapons use and indiscriminate bombing during this campaign, which is interesting to note because Western Mainstream Media usually never talks about such truths. Therefore, this in and of itself should be a glaring indication for all observers that the West is desperately trying to deflect from the ongoing ethnic cleansing that’s happening on the ground, though hopefully, Alt-Media will call them out on it sooner than later”.

Today, Russia itself is increasingly calling the US out on the anti-Arab ethnic cleansing operations of their proxies, a charge the US has generally ignored and occasionally denied.

It helps to think of the post-referendum Kurdish nationalist provocation in Iraq as a kind of test run for Kurdish militants in Syria. In spite of being politically divided, Iraqi Kurdish militias and those in Syria serve a similar purpose so far as the US and Israel are concerned. In both causes, chauvinistic Kurdish ethno-nationalism is being used in attempts to divide, weaken and ultimately balkanise two Arab states which found success in their fight against Takfiri terrorism. In both cases, Iran’s role in helping Baghdad and Damascus destroy ISIS and al-Qaeda is being touted as a reason why Washington and Tel Aviv seek to oppose the emergence of an alliance stretching from Tehran, through Iraq, up to the Syria-Lebanon border and Hezbollah dominated regions in particular.

In reality, Kurdish aggression has merely strengthened the prestige of Iran in both Iraq and Syria and likewise, Russia, which maintains liens of communication with Kurdish groups in the Arab world, is staunchly opposed to any treats against the territorial unity of both Syria and Iraq. Today’s diplomatic yet firm statements by Sergey Lavov are a further indication of this attitude. Russia is willing to support the recent status quo of autonomous Kurdish regions in northern Iraq and could possibly support something similar in Syria, if and only if approved during negotiations between Kurdish parties and Damascus at a future date. Russia however, will not tolerate any Kurdish nationalist moves beyond this. Reports to the contrary are based on conspiratorial conjecture rather than a reading for the facts on the ground.

In Iraq, Kurdish provocations backfired, as Iraq was emboldened to take the necessary steps to fully reinstate its legal control over its own territory, including Kirkuk, a city and region which has never been part of the Kurdish autonomous zone in northern Iraq, in spite of a three year period of Kurdish occupation which Iraq has now ended.

In Syria, would be ethno-nationalist Kurds could be in for an even more difficult time than their Iraqi brethren. While the Kurdish factions in Iraq historically have poor relations with the Turkish PKK, Syria’s YPG is often seem by Turkey, as little more than a regional offshoot of the PKK. The Turkish narrative has been backed up by YPG forces celebrating the US reduction of Raqqa by hoisting large photos of jailed PKK leader Abdullah Ocalan over the smouldering remains of the city. 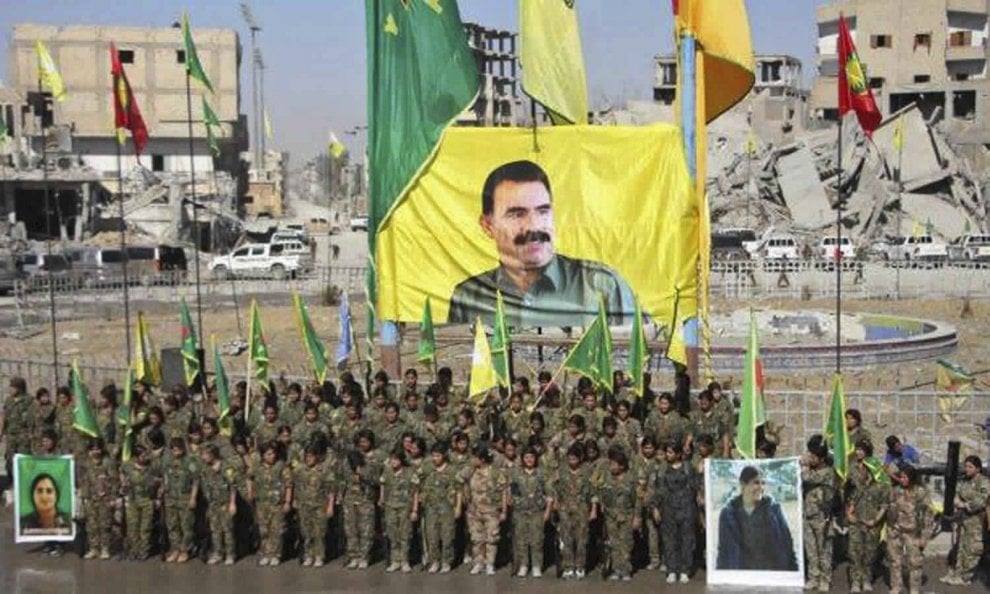 This will be viewed in Ankara as a direct threat to Turkish security and unlike Iraq, Turkey already has a number of troops in Syria territory, including that which is claimed by Kurds. In this sense, the equivalent of the Iraqi push-back of Kurds could be even more resounding in Syria, not least because Turkey, in spite of its non-relations with Damascus, would likely do the heavy fighting.

However much the US wants to use Syrian Kurds to divide, occupy or even annex parts of Syria, the truth of the matter is that without fighting Turkey, the US will have hit a brick wall. With Turkey all but ejected from the position of a US ally, many pragmatists (by US standards) in Washington will urge caution before openly defying the stated security concerns of a large and powerful longtime NATO member. In the short term, these voices of caution will likely win the argument in the Pentagon.

Because of this, the US will almost certainly try and use both Kurdish and Takfiri terrorists to try and slow the progress of Syria and her allies in liberating the remaining 15% of the country that is not back under government protection.  Beyond this, the US and Israel are caught between a rock and a hard place. Both Israel and the United States would like nothing more than a Kurdish puppet state in Syria, but both know that taking on Turkey is a step too far, even by their aggressive standards.

The remaining danger is therefore that the US could pivot its jihadist proxy war against Turkey. Although Turkey has its own share of jihadist proxies in Syria who typically fly under the largely meaningless FSA banner, it is not beyond the realm of possible, that the US could use other jihadist proxies to create attacks and disturbances on Turkish soil. Some in Turkish media have attested that recent jihadist attacks in Turkey are a result of shadow US proxies, althoguh others argue that it is merely the phenomenon of jihadist blow-back from disgruntled former Turkish proxies.

Even more importantly in respect of upsetting Turkey’s internal political situation, with US links to the illegal terrorist organisation of Fethullah Gulen becoming ever clearer, the possibility of Washington using Gulenists to destabilise Erdogan’s Turkey is also very much on the table. Turkey continues to blame Gulenists with deep US connections for the failed 2016 coup against Erdogan and recent events, such as the US willingness to de-facto defend consular employees arrested by Turkey for being Gulenist terrorists, serve to bolster Erdogan’s version of events.

It is not without precedent for the US to wage war of one kind or another against a former or even current “ally”. Saddam Hussein’s Iraq worked closely with the west during the Iran-Iraq War of the 1980s. Likewise, Panama’s leader Manuel Noriega was on the CIA payroll before the US deposed and imprisoned Noriega.

An even better example of the phenomenon of the US working to undermine a so-called ally can be seen in the last several decades of America’s relationship with Pakistan. While the US considers Pakistan an ‘ally’, the US has constantly worked to undermine the security situation in Pakistan. Even more worryingly, the US has contradicted Pakistan’s concerns in neighbouring Afghanistan, while the US continues to provide India with heavy weapons. Furthermore, the US continually meddles in Pakistan’s important and very real alliance with China. These are just the most strident examples of how the US works to undermine Pakistan all while calling Islamabad an “ally”. The popularity of anti-American parties and movements in Pakistan, is a testament to the fact that many ordinary Pakistanis are fully fed up with Washington’s abuse of Pakistan.

The future of US-Turkey relations could begin to look very similar. While the US does not want to fully alienate Turkey or Pakistan, it is doing everything it can to do so, albeit with a “lead from behind strategy”. Just as Pakistan’s relationship with China and now Russia also, has only been strengthened due to Islamabad’s frustrations with the US, the same now holds for Turkey’s new partnerships with Russia, Iran and also China.

The US cannot stop Turkey from exercising its security prerogative in the region, but the US can work to undermine Turkey while pretending to still be an ally. For anyone who thought that Ankara’s relationship with Russia and Iran was not sincere, events on the ground have made such a relationship even more than sincere: they have made it inevitable and necessary.