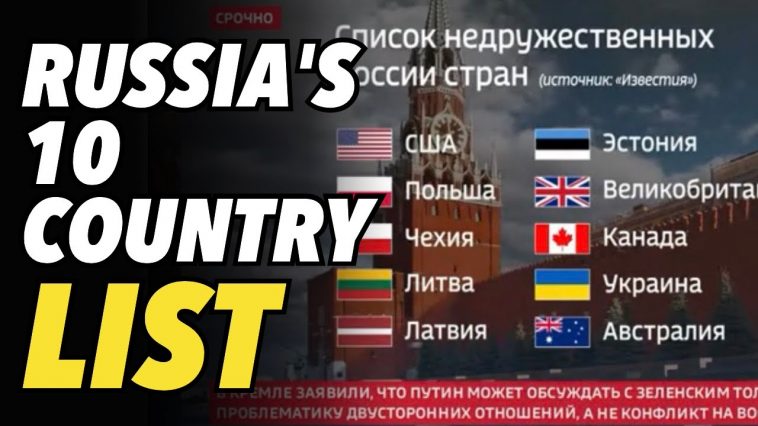 Kommersant: Ukraine launches preparations for Putin-Zelensky meeting Ukrainian President Vladimir Zelensky is bent on meeting with his Russian counterpart Vladimir Putin to discuss the situation in Donbass, Kommersant reports. He has spoken about the need for such a summit for two weeks running, and even instructed his chief of staff to launch preparations for it.

Russia Is Putting Together An “Unfriendly Countries” Blacklist

Russia Is Putting Together An “Unfriendly Countries” Blacklist

Earlier this week Kremlin spokeswoman Maria Zakharova told national media that the Russian government is currently finalizing what it’s calling an “unfriendly countries” list and that the United States is likely to be at the top of it.

Does the C stand for Conman?

The RF has been very patient. The Germans and Austrians have broken their own legislation by supporting KIEV. They knew about the NAZI ethics of KIEV over the past 6 years. They did not need the errant media to inform them. Their own staff in KIEV were fully aware as were the EU officials. Of course when we note that Euro 15 billion of EU tax payer money went “missing” in Kiev we can only assume the EU civil services and politicians have been corrupted. So we are now governed by vassals and cronies who are “for hire”. Meanwhile the… Read more »

“The Nuremebrg trial. Avoided retribution, English translation, The Museum of Victory”
Now it appears, after three generations, we are hosting a new

generation of empowered thugs in Europe. Don’t believe you

can hide behind the “Rainbow Colors” of Soros. You were

criminal psychopaths then, and it seems, you are today.

That depends – was the average German/Austrian taxpayer involved in this? Or was it all the work of unelected bureaucrats?

…luka, luka!…make no mistake!…the only ones that have been looting the Russian resources are Putin’s friends!…the cleptocrats that manage the big Russian companies and pay a high fee to Putin for that and the difference of income levels in Russian are the biggest in the world, making Brazil inequality look like a small boys game!…but you can live in your fantasy world and say that Russia is heavn on earth!…sure you can!…that’s the beauty of the free world!…Putin’s police won’t shoot you on the street!…have a nice day!…

and there is more luka!…the problem of Russia with the west is only one!…Russia can’t operate in an open market logic because Russian economy produces nothing with value for the international market, besides armament!…and so Russian companies would be all eliminated in the Russian market by western companies!…so Russian solution was to keep western competition away from its internal market!…and all this narrative is due to the incapacity or lack of will to turn Russia in a normal society made of free citizen with full civil right capable and willing to create and develop companies and build a modern market… Read more »

Who is buying Russian oil and rocket engines .Who has bummed rides to the iss?

…lol…what’s intress and the utility for the normal citizen that is 98 % of the population – ZERO intress!…

The Logic of Extrapolation
Reply to  jpthiran

Yet another logical extrapolation for you to ponder. Given all of that wonderful stuff you say accompanies a ‘normal society’ and that Russia lacks, who do you think is better prepared to survive a nuclear war, Americans who’ll turn full psycho and eat their own in the aftermath or Russians?

But, to each his own. You’re just a poser anyway. The monkey see, monkey do variety.

Leave the strategizing to the grownups, that’s my 2 cents.

jpthiran
Reply to  The Logic of Extrapolation

@The Logic of Extrapolation … I know that it’s hard to cope with the reality!…and rewriting the reality is a normal event for the communists!…but your answer is specially serious, sinister and unacceptable!…what you have done is imply the use of nuclear weapons!…that shows how sinister and sick you and other like you are!…and it shows the total lack of arguments from your side!…once again the answer is only one – endless brutality, violence and destruction!…it’s obviously much more difficult to build than to destroy!…that why in the west we build and prosper and under the communist logic you get… Read more »

Which Baltic enemy statelette is your broken English chiming in from, may I ask?

The Logic of Extrapolation
Reply to  jpthiran

If all that Russia produces is armaments then thank your economy’s lucky stars, because if it can go toe to toe and even outdo NATO on that front on a 20th the budget, then what do you think would happen if it decided to set its sights on commercial goods?

Dumb farts never think beyond the noses on their faces. 😉

jpthiran
Reply to  The Logic of Extrapolation

Yeah, I noticed. That must be why the US imposes sanctions because it’s so competitive….you really are living in the twilight zone

The ‘free world’ what exactly is that?

Ain’t America any more, that’s for sure.

Anders Aslund, is that you posting incognito again?

Thanks for the support.

My cousins in Europe know very well what they have done.

This is THE THIRD time they have ben led astray.

The European Union is the FOURTH REICH tool of evil.

The next will last no more than 60 hours.

The RF called the threat of the NATO global protection racket.

There is nothing there, all bluff.

…the best thing would be to create a black list for all the western countries and cut the relations with the west!…the west would be deeply grateful!…and we would end this endless quarrel and all the problems that Russia likes to create!…before the west does that to Russia!…all this is just to hide the endless failure of Putin to create a modern, democratic and prosperous country…despite the fact that Russia has all the most valuable natural resources in abundance, water, farming land and educated people and should be the richest country on earth, by a far distance!…in fact, Russian people… Read more »

The criminal west wants ALL of the assets of the RF.

Shame for the west.

Our corrupt governments do not represent the thoughts and feelings of the majority of the citizenry. Unfortunately the empire has us under their heel I hope these criminals terrorizing the world are brought to justice for their unfathomable crimes.

I think Alex is being a little sarcastic. Hardly surprising given the context of contemporary international relations.

Interesting that Russia “prevents listed country embassies from being able to hire Russian citizens to work at their diplomatic and consular missions”. I wonder if this is because they have found, let’s call it a certain “disloyalty” to Russia among some Russians working there. The move might also be a way of reducing staff at the embassies of the countries on the naughty list because foreign job applicants would have to apply for a Russian visa and background checks could take a very long time before approval is granted.

Just a guess but.....
Reply to  Smoking Eagle

I think they continuously ply them with promises and cold hard cash to perform certain ‘tasks’ they find useful to their misbegotten cause.

A great commentary. @jpthiran: re: who is looting Russian resources – it is precisely the fact that the Kremlin started putting a squeeze on the likes of ExxonMobil, BP and the co., who are VERY WELL represented on the Russian market even now, that made Putin the enemy of the ‘civilized’ West. West-based global transnationals have tens of billions of dollars invested in the Russian economy. Even after the dilution of their Sakhalin stakes by half, western oil companies repatriated Russia-made profits that exceeded their losses twofold and more. Check the stats, check corporate reports – it’s all available. So… Read more »

Just a guess but.....
Reply to  Mikhail Molchanov

They’re just pissed off that the loans for shares boondoggle they pulled on Yeltsin had a shorter half life than they anticipated.

…whatever you may say or not your beloved Russia is a failed state that according with any democratic standards…and all answer to problems it faeces internally or externally are solved by the use of force or treat of use of force…police force applied internally, military force applied externally…the population as no civil rights and no wealth and material comfort…poverty generalized as in Communist times!…economy is limited to arms production and natural resources extraction and export!…the state is controlled by the secret police and the economy is controlled by cleptoctats!…worse than this in terms of civil rights it’s only possible to… Read more »

Helga I. Fellay
Reply to  jpthiran

You are describing the US to a t, in every sentence – why do you keep calling it Russia? You seem very confused.

So the USA is No. 1. Finally, after a long time of not being No. 1 in anything. It may be the very last time it ranks First on any list.

This is a good summary of the enmity of the US and its allies, and their malign actions, with respect to the Russian Federation and its people. You can expand the horizon and look at the enmity and malign actions and the sheer destruction of the US in Korea (1950-53), Iran (1953), Vietnam, Latin America, Irak and so on. William Blum has a good summary in his book “Rogue Nation”, as does Eric Frey, in his book “Schwarzbuch USA”, 2004. I think that most nations and business people ought to use every chance they get to distance themselves quickly from… Read more » 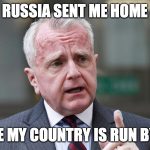 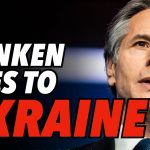 wpDiscuz
36
0
Would love your thoughts, please comment.x
()
x
| Reply
Send this to a friend