Throughout the storm of Russia-gate, we have constantly been bombarded by scandalous talk about the alleged “election interference” of “The Russians”, as if all Russians are collectively up to no good. While the facts have revealed the Russia-gate narrative is based on manipulations of circumstantial evidence, or outright fabrications, one very real threat is the prospect of foreign, possibly American interference, in the upcoming 2018 Russian Presidential elections, scheduled for this coming March.

Unlike the idea of a Russian hack, American interference in Russian politics is a well-known fact. Take for example the Times magazine cover of 1996, in which Yeltsin is pictured alongside the words “Yanks to the Rescue – the secret story of how American advisers helped Yeltsin Win”. 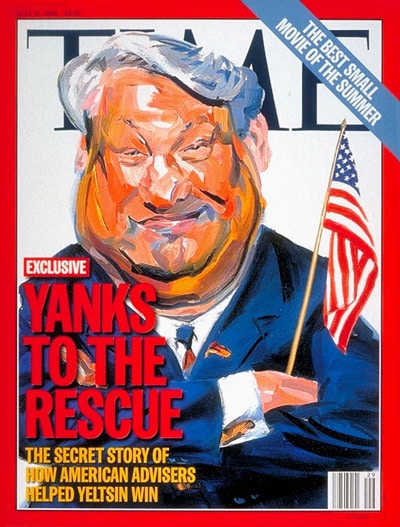 That magazine cover was not only an open mockery, blatantly flaunting American interference in Russian elections, as well as incredibly cynical, but in hindsight, it reveals a double standard all too common in today’s world. One need only imagine if Russia had published a magazine of Trump with the words “Putin to the Rescue”; the outcry would be far and wide.

While wild speculation and fearmongering is beneath the role of respectable media, a reasonable observer cannot rule out that in today’s environment, the potential for some degree of US interference in the Russian election is high.

Provocative actions and false flags are a possibility, and recent history has revealed trends that we may see repeated. Russian Foreign Minister Sergey Lavrov, for example, has taken note of constant US meddling in Russian elections before, and there is no reason to think we won’t see it again, now of all times.

A microcosm may be the events in Ukraine. Despite an openly fascist coup, which violently overthrew a democratically elected government, the events of the Maidan were hailed as a Revolution of Dignity. Around 10,000 people have been killed in this war, yet the silent slaughter is casually overlooked by the mainstream media, occasionally discussed, if only to blame Russia, with a casual indifference to those actually being killed – mostly ethnic Russians.

Crimea, however, was peacefully integrated into Russia, after the majority voted for this reunion, which they continue to overwhelmingly support. According to Kiev, who blame Russia for everything under the sun, only two of their soldiers were killed in this “Russian invasion”; despite it being portrayed as Nazi Germany invading Poland.

So what does Ukraine have to do with the Russian elections? The reality is, like in Ukraine, no matter what the people on the ground feel, the “stenographers union”, (as The Duran’s very own Peter Lavelle so aptly calls the Mainstream Media), will always report whatever the deep state tells them. That means that no matter what the facts are, we can expect to hear claims of election fraud at the least.

One of the steps Russia is taking to counter this is inviting international observers to monitor its elections. According to the Russia news agency TASS, Ella Pamfilova, the Central Election Commission chairwomen told reporters Tuesday that:

“We cooperate and work with many related organizations in nearly one hundred countries in Latin America, Europe, Asia, Africa. They are our partners, colleagues on all continents. We actively correspond, interact with them and will invite them”

She also said they will work closely with the OSCE Office for Democratic Institutions and Human Rights (ODIHR), who will be sending around 500 observers to Russia.

According to RT, seeing as Russian observers were banned from the 2016 US elections, Russia will reciprocate, not accepting a formal delegation from the United States, while the idea of private US citizens participating in already established international missions is not ruled out in the opinion of Deputy Foreign Minister Sergey Ryabkov.

The Foreign Minister himself, Sergey Lavrov, however, stated the US embassy was “constantly meddling” with Russian elections, so the potential for new Russian election drama looks like it’s turning out to be the gift that keeps on giving. If you consider dismal relations with a nuclear-armed superpower to be a gift that is, if not, hopefully, the March 2018 Presidential Election will be smooth and meddling free.