In a further sign the US is losing the dominance of the world’s economic system which it has enjoyed since the end of World War 2, Russia is massively divesting from US securities.

In April, Russia dumped $47 billion in US bonds – roughly half of the US debt it holds.

US President Trump’s escalating tariff war, plus ever-expanding US sanctions on Russia, could also be contributing factors to Moscow’s decision to increasingly ditch dollars.

In exchange, Russia is turning to an ancient and time-tested store of value: gold.

The question is, as the US trade war with China escalates, will Beijing follow suit?

US sanctions have forced Russia to look at ways of securing its foreign reserves. In recent years, Moscow has increased purchases of physical gold and dramatically reduced its share of US debt bonds.

The political standoff started in 2014, shortly after the conflict in Ukraine and the referendum in Crimea in favor of joining Russia. Several rounds of US sanctions followed, with the latest affecting major Russian companies and individuals who run them.

In April, Russia sold half of its US sovereign debt bonds, getting rid of nearly $47 billion worth of securities, according to US Treasury data released last week. The sell-off is a signal that Russia’s financial regulators are diversifying the country’s foreign exchange reserves, say analysts at the Copenhagen-based Danske Bank.

“Some people ask whether the Russian Central Bank sold them to support the ruble in April, but it’s about changing allocation as reserves continue to grow,” Vladimir Miklashevsky, a senior economist at Danske Bank in Helsinki, told Bloomberg. “Rising US yields have fueled the sell-off.”

Russia sold more than any other major foreign holder of US debt – even as its reserves grew on the back of rising oil prices. The country’s current stake shrank by nearly four times against the hefty holding of more than $176 billion eight years ago.

According to the Central Bank of Russia (CBR), the country’s top controller of foreign exchange reserves, all kinds of risks, including financial, economic and geopolitical are factored when the reserves are allocated. “We pursue the policy of safe and diversified holdings,” CBR Governor Elvira Nabiullina said, commenting on the issue.

Meanwhile, Russia’s gold holdings have been steadily increasing, bringing its share of the precious metal to its highest level in nearly two decades. Last month, Russia’s gold holdings grew by one percent to 62 million troy ounces, worth $80.5 billion, according to the CBR. In May, Nabiullina said gold purchases helped to diversify reserves.

Russia fell to 22nd place on a list of major foreign holders of US securities. Moscow’s big sell-off reportedly was not so crucial for the $14.9-trillion US Treasuries market. A bigger question is what happens to the US securities market if China decides to follow suit and pull out its $1.18 trillion holding.

“China could do the same if the trade war gets too bad,” Danske Bank’s Miklashevsky said. “That tool has been used before. In Russia, it’s more about keeping the money safe from sanctions because they need it for a rainy day.”

For every seller, there has to be a buyer. So who bought the 47 billion dollars worth of U.S. Debt? Did Russia sell it to another country or did the Federal Reserve buy it back? The debt and the interest due on it remains on somebody’s financial ledger.

The author of the article needs to find out who now holds the treasury bonds to complete the story.

Russia is the Worlds largest purchaser of Gold for the past three years and the third largest producer of mined Gold in the World today. 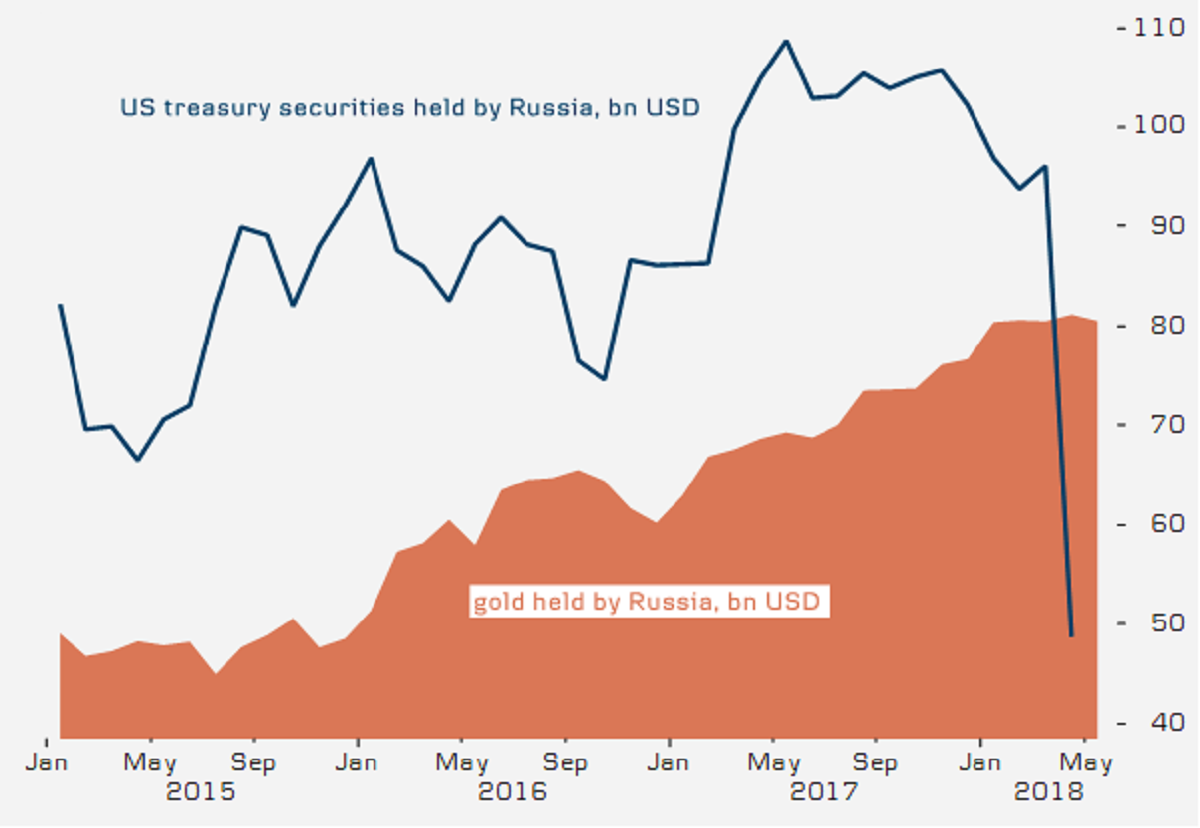 Hold on a minute. $47b ‘debt’ bond. That’s money the US supposedly owe Russia. Does Russia dropping the bond clear that much of Americas debt to them? If that’s the case I might actually have to praise Trump as he may actually have done the US a favour. Not a big one but a significant one.

no real point risking usd holdings when sanctions rob your wealth at the drop of a hat.