Let’s face it, rap is hardly the most inspiring genre of music: crude couplets, puerile or violent subjects, and laced with profanity. Occasionally though, a rap or similar piece of music strikes a chord with the public, deservedly so. One such rap was Gilet Jaune which became an anthem for the Yellow Vest Movement in France three years ago. The man behind it is Kopp Johnson, a delivery driver from Toulouse, and one of the people most affected detrimentally by the outrageous increase in fuel taxes imposed by the Macron Government.

Gilet Jaune was uploaded to YouTube on November 23, 2018 and has to date racked up over 28 million views.

Gilet Jaune was written with intent, but Let’s Go Brandon arose accidentally and spontaneously from a crowd chant. On October 2, sports journalist Kelli Stavast was interviewing racing driver Brandon Brown at an event in Alabama, but some distance from the crowd. As she did so, they began chanting in unison “F*** Joe Biden” – fill in the asterisks! Brown had just won his first ever race as a Nascar driver, so Kelli thought the crowd was shouting “Let’s go Brandon!” Or did she? Whether she was deaf or simply being diplomatic, she has won a place in the annals of reporting. And inspired a song! More than one, actually. The biggest one so far is by a black Trump supporter named Loza Alexander, whose YouTube channel now has over a hundred thousand subscribers thanks principally to this ditty.

Another arguably more thoughtful song with the same title was released by another black Trump supporter; Bryson  Gray was already a name, and as well as sporting a MAGA hat he has been seen wearing a hoodie emblazoned with the legend MAKE AOC BARTEND AGAIN.

Doubtless more songs in the same vein will be released, but what next, a film? How about simply let’s go, Joe? Back to Delaware, perhaps to an old folks home, or better still to the penitentiary where you belong, along with your son Hunter, Christopher Steele, John Brennan, Hillary, and a few dozen others. 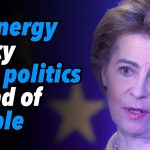