The Hill reports that NBC is facing backlash on social media for a tweet calling Oprah Winfrey the future president.

In response to a Seth Meyers joke at the Golden Globes, the network tweeted “Nothing but respect for OUR future president” to its 1.77 million followers along with a photo of Oprah from the Hollywood event Sunday night.

The tweet seems to reference a well-known meme that went viral in 2017, when people posted various situations along with the caption “Nothing but respect for MY president.”

The network said on Monday morning that the tweet was sent by a “third party agency” for its entertainment division and had been “removed.”

There is speculation that the 63-year-old is considering running for president in 2020 against President Trump. The television host, producer and philanthropist has denied she will seek the office, but a fiery speech during the Golden Globes has refueled speculation.

The tweet from the network came after Golden Globes host Seth Meyers said in his opening monologue that his ribbing of Trump at the White House Correspondents’ Association Dinner in 2011 may have been what compelled the real estate mogul to run for president.

“In 2011, I told some jokes about our current president at the White House Correspondents’ Dinner. Jokes about how he was unqualified to be president. Some have said that night convinced him to run,” Meyers said before delivering the joke’s punchline.

“So if that’s true, I just want to say: Oprah, you will never be president! You do not have what it takes!”

NBC quickly faced blowback on social media, with some joking Oprah would be NBC’s next president rather than President of the United States.

When NBC tweeted Oprah pic with ‘Nothing but respect for OUR future president,’ did it mean she should be president of NBC? Of the United States? Of something else? All-caps OUR kind of confusing… https://t.co/Q3TDMAmKRz pic.twitter.com/2uKUBKnQ5O

Oh look, NBC has declared #Oprah our future president…
Everyone fall in line with your media overlords. #GoldenGlobes #GoldenGlobes2018 pic.twitter.com/0CoiRtV3da

Oprah is taking over NBC? https://t.co/09cqLzDlmq

So, it looks like the @Oprah Winfrey Network @owntv
and @nbc
have merged… https://t.co/BMjgWFo3B3

I hear #Oprah gave what amounted to a campaign speech tonight. Will this be her campaign poster? pic.twitter.com/cQ17nMGnsh

I have watched every episode of the Oprah show in history, I credit her with saving my life, there is no bigger fan…so I feel I have some moral authority when I say that this is a strange tweet for a broadcast network. https://t.co/bH0pczGPtY

This tweet puts every reporter at NBC in a bad spot. Foolish thing for them to do. But at least now they are open about their bias. https://t.co/tIQtBodRkS

NBC was voicing what the liberal left is now openly pushing for…a hollywood elitist who has all the neo-liberal, identity politics qualifications to take on Trump.

Prediction: If Trump wins, Dems will nominate Oprah in 2020. Takeaway will be that celebrity trumps all, and @KimKardashian is too young.

Zerohedge reports that minutes after giving a rousing speech at the Golden Globes Awards that promised “a new day” for women, minorities and the downtrodden…

…Oprah Winfrey said she has no ambitions to run for president. In a brief interview backstage at the event, Winfrey was told that “Oprah 2020” was circulating on Twitter, and asked whether she planned to run. “I don’t — I don’t,” the 63-year-old billionaire told Bloomberg.

By then, however, the drumbeat was well underway according to Bloomberg.

“She. Is. Running,” said John Podhoretz, editor of Commentary magazine. “Oprah. 2020,” said Shaun King, the Black Lives Matter activist. The host of the Golden Globes, late-night comedian Seth Meyers, jokingly urged Winfrey to run in his opening monologue, noting that President Donald Trump had reportedly decided to make his bid for the office after he was the butt of Meyers’s jokes at the White House Correspondents Dinner in 2011.

In her speech, Winfrey, worth ~$3.6Bn, made references to the sexual harassment scandal in Hollywood and marked the recent death of Recy Taylor, whose sexual assault in 1944 became a focal point for civil rights activists, in her speech to accept the Cecil B. DeMille award for lifetime achievement.

“I want all the girls watching here, now, to know that a new day is on the horizon!” Winfrey said. “And when that new day finally dawns, it will be because of a lot of magnificent women, many of whom are right here in this room tonight, and some pretty phenomenal men, fighting hard to make sure that they become the leaders who take us to the time when nobody ever has to say, ‘Me too’ again.”

Still, even with Winfrey’s denial to Bloomberg, the speculation is likely to continue.

“It’s up to the people,” Winfrey’s longtime partner, Stedman Graham, told the Los Angeles Times on Sunday when asked about a presidential run. “She would absolutely do it.”

How many shows did Oprah do over all those years exposing sexual predation in Hollywood? Let me count. ….NONE

The destruction of THE FAMILY is almost complete.

Hollyweird will bring in GAYDOM,TRANSGENDER,TRANSHUMANISM…

Social Engineering… Communist Cabalist Indoctrination will have the cover of FEMINIST MOVEMENT…WOMAN EMPOWERMENT..but REAL woman will be eventually destroyed,to bring

in the Perversions of Babylon in the Jewish Talmud…

Satanic Hollywood told everyone to WEAR BLACK at GLOBE AWARDS..in honor of SATAN

FREEMASONIC TERM is a A NEW DAWN 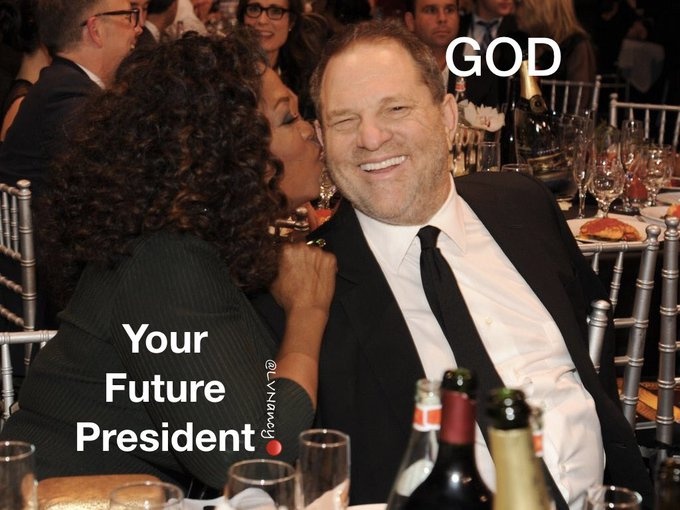 Tax cuts for everybody – check under your seat.

She will give her talkshows from the oval office? And why not Jerry Springer for president?