Two months ago an unverified report surfaced, promoted by California Democrat and Trump-Derangement Syndrome victim Representative Adam Schiff, that stated that Russians were paying bounties to the Taliban for the killing of American soldiers in Afghanistan. That report went into the great cloud of unknowing… until now. Now, the Russian side is upset about something else in this report. The Russian Embassy to the United States shows this on its Facebook page: 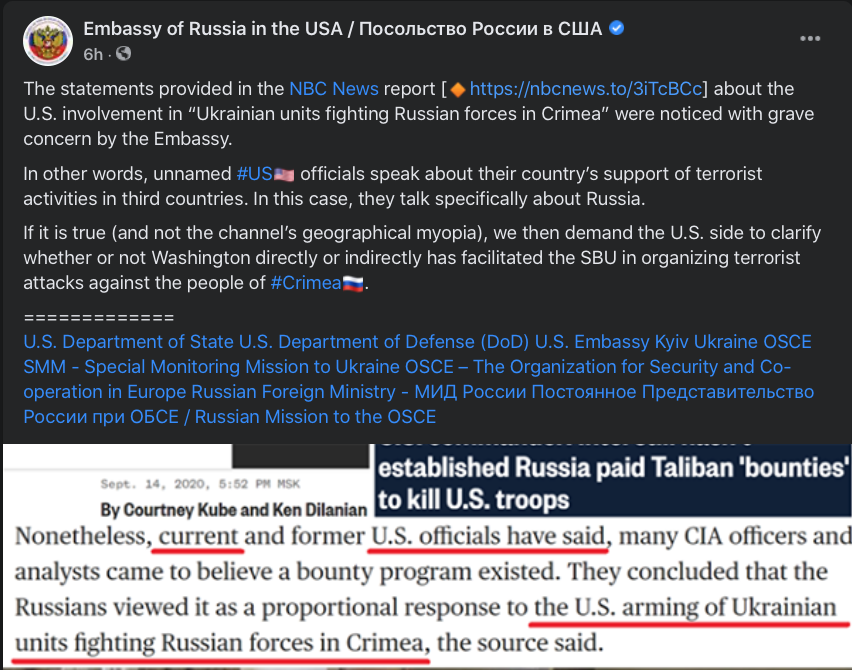 Russia Today (RT), noted that the report in question, published by NBC news, has this little gem buried on paragraph Twelve [We give paragraph 10 and 11 as well to build context – Ed.]:

… The suggestion of a Russian bounty program began, another source directly familiar with the matter said, with a raid by CIA paramilitary officers that captured Taliban documents describing Russian payments.

A Taliban detainee told the CIA such a program existed, the source said, although the term “bounty” was never used. Later, the CIA was able to document financial transfers between Russian military intelligence and the Taliban, and establish there had been travel by key Russian officers to Afghanistan and by relevant Taliban figures to Russia.

That intelligence was reviewed by CIA Director Gina Haspel and placed in Trump’s daily intelligence briefing book earlier this year, officials have said. The source described the intelligence as compelling, but meriting further investigation. Nonetheless, current and former U.S. officials have said, many CIA officers and analysts came to believe a bounty program existed. They concluded that the Russians viewed it as a proportional response to the U.S. arming of Ukrainian units fighting Russian forces in Crimea, the source said.

Now the Russian Embassy in the United States is demanding an explanation.

…The embassy said it treated the report with “grave concern” in a social media post on Thursday, asking Washington to provide further detail as to whether American weapons were being passed to Ukrainian fighters carrying out clandestine operations in Crimea.

“Unnamed US officials speak about their country’s support of terrorist activities in third countries. In this case, they talk specifically about Russia,” the embassy said on Facebook.

Honestly, it is quite likely that this whole report is highly problematic. The sources are unnamed, which after three and half years of hearing about unnamed sources claiming that Trump is everything from a pedophile to an evil troll alien from the Galaxy Andromeda (and a Russian agent serving Vladimir Putin all the while), well… there is nothing about this that is easy to trust.

Further, the main point of the NBC article is that the Taliban-bounty connection is not corroborated and after two months remains uncorroborated by American intelligence:

Two months after top Pentagon officials vowed to get to the bottom of whether the Russian government bribed the Taliban to kill American service members, the commander of troops in the region says a detailed review of all available intelligence has not been able to corroborate the existence of such a program.

“It just has not been proved to a level of certainty that satisfies me,” Gen. Frank McKenzie, commander of the U.S. Central Command, told NBC News. McKenzie oversees U.S. troops in Afghanistan. The U.S. continues to hunt for new information on the matter, he said.

“We continue to look for that evidence,” the general said. “I just haven’t seen it yet. But … it’s not a closed issue.”

This is fake news, most likely. The US intelligence services have shown stunning gaps in accuracy and truth in recent years, leading to wars that were probably just desired by the military-industrialists anyway. It is interesting that two months has shown nothing, and it would appear that General McKenzie is playing politics to not simply declare there is no story here.

The style of this report is also reminiscent of Russiagate, which after being disproved hither and yon still manages to be employed by any politician who wants to “float the threat” of it being “possibly true” to get their own way.

The American government has been utterly emasculated by “could have been”, “might have been” true, save a very few individuals who find it hard to row against the lemminglike tide of zero thought and conformity.

However, the assertion that the unnamed source alleges, that the US is aiding militant groups pushing against Russian forces in Crimea, is certainly curious at best. Such a story, seen by the American press as no big deal, is very provocative in Russia, in particular over the matter of Crimea, which the Western allies have deliberately refused to accept.

Careless statement or Freudian slip? That is what the Russians want to know.

You guys always do an accurate analysis and in my opinion do manage to remain balanced and unbiased. Greetings from Moscow!

I I would add that American influence in post Soviet countries over the past 30 years have been very significant. In Georgia in 2008 there were mercenaries with American IDs found, the story was very well documented. They also tried to do it with Ukraine, a full-fledged war of Ukraine against Russia was their goal

America acts like a rabid dog. Russia should treat it accordingly.

What a Tangled Web We Weave
Reply to  Nick

You forgot the CIAchiks airlifted out of Macedonia so they wouldn’t be caught training ethnic Albanians how to topple the government.

Not only that, UK sent paratroopers to drop into Ukraine. Article on South Front. Can you imagine the hysteria if Russian paras were landing in Donetsk?

I think my wife came from Chechenslovakvenia, just like President Trump’s.

What’s with the Are the Americans supporting Neo-Nazis thing?

Was the Polish Pope Polish?

Wanna get the lowdown on that love fest? Read Nolan Peterson’s ramblings sometime.

We all know the Russia bounty thing is totally bull@#&?, but the US turning a blind eye to US neo Nazis headbangers fighting in Ukraine, is a Real thing,also these crazed white separatist may indeed have financial support from US deep state to cause havoc in East Ukraine and the Crimea,,the US by supporting these right-wing terrorists,will perhaps put their own country in jeapody,because these people have no love for many of their non white compatriots,meaning they despise blacks,jews,asians and Muslims,these maniacs will one day return to the US with evil intentions,and with the decisive atmosphere,partly caused by the absolute… Read more »

Austria and Germany are already in deep and dangerous peril because they have neglected their own legislation by supporting KIEV since 2014.

All of the German and Austrian nationals who associated with the KIEV regime, as stated in their own legislation, are criminals.

The NAZI martial ethic is useful to certain factions who make money from war. The NAZI “cult” is powerful in terms of motivating the testosterone in young men, and women.

Of course the USA will not sign the UN agreement which bans the NAZI ethic.

So we ask the question…who benefits?

This extensive essay may be of interest: 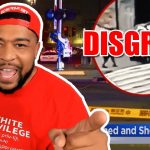 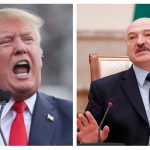