Regardless of the UN arms embargo, yet more weapons are flowing into Libya, to both sides, following the assault on the capital by Field Marshall Khalifa Haftar’s Forces, started in early April, that now threatens to escalate into a full on proxy war between regional powers, expanding the intensity of the civil war expeditiously.

Haftar, whose Libyan National Army (LNA) is allied with the HoR Parliament in eastern Libya, is supported especially by Egypt and the United Arab Emirates.

On the other side, Turkey and Qatar, both Muslim Brotherhood regimes, back the Tripoli-based Government of National Accord (GNA) which is recognised by the ‘international community’ and the U.N.

I am reminded of an article I wrote three years ago, in the Times Of Oman, titled

‘Libyan Quagmire To Inevitably Continue’ dated May 17, 2016 and a specific quote from it.

“……it is right to describe the pre-agreed decision to ‘arm’ the GNA, as literally insane. The GNA bring absolutely no unity whatsoever to Libya.”

It is true also if Haftar’s Forces receive weapons.

Arming either side, any side in the multi-faceted civil war that exists in Libya, remains insane.

In a way it can be described as ironic that Russian, more accurately described as Chechen diplomacy is now proving to be of increasing importance.

A very direct, to the point, no nonsense series of statements emerged, not from the UN or the so called ‘international community’, and not from a Russian but from a Chechian “If any actions happen that aren’t sanctioned by the UN, they are illegal and ineffective, they will only worsen the problem,” said Lev Dengov, who urged foreign backers of the rival sides to focus on mediating a resolution of the conflict.

“If the parties inside the country remain at odds and the outside powers too, there won’t be peace any time soon in Libya,” he said.

Achieving a cease-fire “would require input from the big Security Council members” such as Russia and the U.S., said Claudia Gazzini, a Libya analyst at the Brussels-based International Crisis Group.

Russia’s role in Libya over the last seven years, by and large, has been overshadowed by the US, UK, France and Italy, along with regional powers, however since Haftar’s offensive began, the admirable pragmatism and bluntness displayed by Dengov has been more than impressive.

He has told it ‘as it is’! A rare quality in diplomatic circles inhabited by obedient bureaucrats who usually tip toe around problems as if they were surrounded by egg shells.

Dengov made extremely forcefully a point of criticising both Haftar and Sarraj for their unwillingness to sit at the negotiating table. He also expressed great concern that possible steps by the Central Bank to effectively cut off the banking sector in Haftar’s eastern stronghold would provoke Haftar to retaliate by seizing total control of almost all Libya’s oil exports.

“It would be one of the most unwise decisions for the future of a united Libya,” Dengov said. “It would lead to a new cycle of aggression and escalation.”

With Haftar’s offensive having ground to a halt on Tripoli’s outskirts, a military stalemate now exists with both side rejecting calls for a cease-fire that would involve withdrawing each ones forces.

A little background is required now for the reader to understand Lev Dengov’s importance. His activities in Libya are sanctioned not only by the Russian Ministry of Foreign Affairs and State Duma but also the Chechen leadership.

To further explain, Dengov is close to the important Chechen leader, Ramzan Kadyrov, and Dengov has also been given by Russia a leading role in the ‘Contact Group’ on “Libyan issues.”

Moreover, Dengov was appointed by Russia to head the diplomatic mission dealing with “agitational-propagandist work (whatever that means!) in Libya and was endorsed by the Russian MFA, the Foreign Ministry as well as Ramzan Kadyrov personally”.

This presents an interesting development, reflecting the ever increasing role Grozny is attempting to play in Russia’s Libyan policy via its own Chechen middleman.

Dengov’s most resonating, impressive comment was when he said last week that the conflict will continue until a leader emerges “who can unite everyone,” adding “If that leader was Haftar, he would already be in Tripoli, the city would have fallen without a fight.”

A neutral unity government, not the GNA or HoR, with proper plans should be ‘installed’ in Libya with a mandate to reach an early election but only after a basic constitution is finally written; uniting all institutions including the army in an effort, not least, to stabilise the economy.

And neither Haftar or Serraj can do this.

Certainly not Serraj who is a Muslim Brotherhood ‘prisoner’,  a ‘puppet’ to both the U.N. and the Brotherhood. So who will it be?

Haftar’s role could and should be confined to the army, not in any political position.

No foreign intervention. No new arms or ammunition must reach any side in Libya; war is not the solution.

Libya can only be stable and prosperous under democratic rule with international support from the world’s community of Nations, notional that should be the UN. But their record in Libya in years gone by has not been very distinguished to say the least.

One can only hope that a saviour emerges from the ashes that is Libya today but one can bet he or she won’t come from the existing crop of discredited existing political Libyan players.

In ending it is very interesting to note that the influential US Senate Committee on Foreign Relations appears to somewhat agree with Dengov’s assessment, evidenced, I argue, by the contents of this below letter written on the 29th of May, by the committee to President Trump. 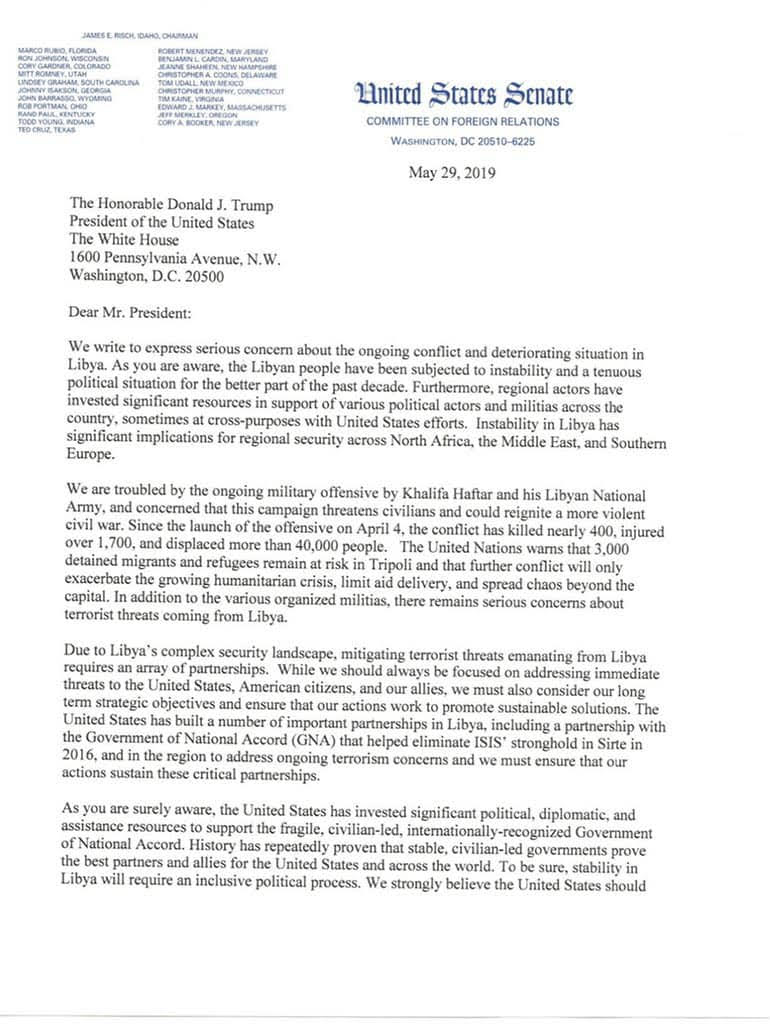 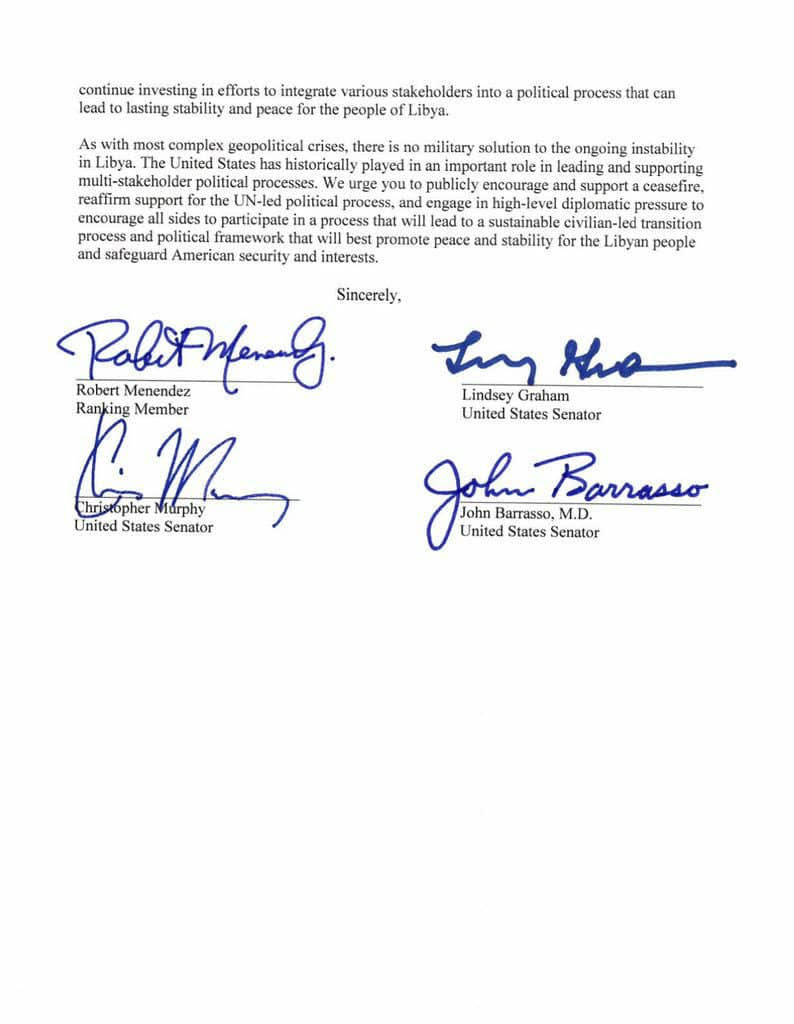 Very interesting and important article was published ever .. it gives a solution for the crisis in Libya without losing country

Thanks for posting… That’s funny, the letter was written May 29th by the disgraced US Committee on Foreign Relations — which supports bloodshed all over the globe — just after Sarraj completed a rather lame trip to see Macron earlier in May, and that trip achieved nothing. The irony of that letter though is quite amazing. Dengov I believe was appointed chairman of the Russian-Libyan Trade House as a reward for the excellent work he did rescuing hostages from Libya, so he does seem capable. On the other hand, the Chechen connection as intermediary for Russia in Libya does seem… Read more »