RT and TASS reported on August 31 that the Aleksandr Zacharchenko, the leader of the self-proclaimed Donetsk People’s Republic, was killed in an explosion that took place in a cafe in Central Donetsk city. The explosion also injured several other top officials who were with him. RT continues in their report:

“The head of the DNR, Alenksandr Zakharchenko, has died as a result of a terrorist act,” a spokesperson of the self-proclaimed republic’s administration told journalists, revealing no details of the incident.

“An improvised explosive device was planted inside the café … right near the entrance,” Aleksandr Kazakov, an advisor to the DNR leader, told RT, adding that the killers apparently knew that Zakharchenko would arrive at the café and were “waiting” for him. A state of emergency has been imposed, Kazakov said, adding that borders with both Ukraine and Russia were sealed as the security services are “actively searching for the potential perpetrators.”

One of Zakharchenko’s deputies also sustained severe injuries in the blast while several bodyguards died in the incident, Kazakov said. He added that Zakharchenko died at the scene as well, contrary to the earlier reports suggesting he was injured and succumbed to his wounds in a hospital.

Moscow condemned 42-year-old Zakharchenko’s murder, adding that it could be detrimental to the whole peace process in Ukraine.

The death of the DNR leader could have a particularly negative impact on the implementation of the Minsk Agreements, Konstantin Kosachev, the head of the Russian Senate’s International Affairs Committee, said.

There is “every reason to believe” that Zakharchenko’s murder was orchestrated by Kiev, which “has repeatedly resorted to such methods to get rid of dissidents and undesirables,” Maria Zakharova, spokeswoman for the Russian Foreign Ministry, said.

“Instead of abiding by the Minsk Agreements and seeking ways to resolve the internal [Ukrainian] conflict, the Kiev warmongers opted for a terrorist scenario, thus exacerbating an already tense situation in the region,” she added. The Ukrainian security service, the SBU, has denied involvement in the killing of the DNR head.

Aleksandr Zackharchenko was born in Donetsk in 1976. He was a graduate of the Donetsk College of Industrial Automation with a degree in mining electromechanics. He became the leader of the breakaway republic of Donetsk in August of 2014, after the EuroMaidan coup overthrew the lawfully elected Yanukovich government in Ukraine earlier that year.

He was hugely popular as a leader and survived several assassination attempts, presumably also orchestrated by Kyiv, before this one took place. Under his leadership, Donetsk has actively refused to accept the Kyivan regime, and presently a state of civil war exists with both Donetsk and its neighboring province, Lugansk; both fighting the Western Ukrainian forces.

With Petro Poroshenko intending not to renew the friendship treaty with Moscow, this event signals that Ukraine’s present leadership believes it can dig in and act as it pleases in violation of the Minsk and Minsk II accords, which it did sign agreement to.

The political scientist Rostislav Ishchenko commented on the murder of the head of DPR Aleksander Zakharchenko. He spoke about this in comment to the “Ukraina.ru”publication.

“Zakharchenko signed the [Minsk – ed] agreements on behalf of the republic, on behalf of the DPR. The fact of Zakharchenko’s death in itself from the point of view of international law doesn’t influence the Minsk agreements in any way. States sign agreements, and not politicians, even if this state is unrecognised. Another thing is that Zakharchenko’s death will influence the situation at the line of demarcation. I think that it is deliberate provocation carried out by Ukraine for the purpose of aggravating the situation during the pre-election period in order to strengthen the position of Poroshenko. Now the session of the parliament [the Rada – ed] has just started, which is supposed to determine the date of the elections,” noted Ishchenko.

He noted that the time of the greatest vulnerability for any state is the time when power changes, especially if it happens in a violent way.

“Kiev achieves two effects. It weakens the DPR’s position, especially since the DPR has the leading position in Donbass. On the other hand, Kiev creates the conditions for tensions in the region to intensify. And this can be used in the internal political game,” stressed the political scientist.

He doesn’t consider Zakharchenko’s murder as proof that the statehood of the DPR is in crisis.

“The Soviet army staged an offensive, but in 1944 the front commander General Vatutin died — he was ambushed by Banderists. And in 1945 the front commander General Chernyakhovsky died. He simply came under shelling. When you are at war it is clear that absolute security doesn’t exist. Especially since the position of the DPR and LPR isn’t the position of the Soviet fronts in the Great Patriotic War, where HQs were 50km from the front line. It is clear that saboteur and reconnaissance groups work in the LPR and DPR. In such a war it is impossible to completely exclude the work of saboteurs,” specified the expert.

According to Ishchenko, in this war media and charismatic personalities died — they are the enemy’s prime target.

“If you [Kiev – ed] killed Givi or Motorola, then it will be discussed and is still being discussed. And you also have an information victory. It is the same thing concerning Zakharchenko — he isn’t just a charismatic leader who is difficult to replace in the DPR. He is also a leader of all Donbass and all the Southeast should the frontline move towards Kiev. Of course, he was the prime target of Ukrainian saboteur and reconnaissance groups. And absolute security doesn’t exist. Kennedy was a US President, he was protected better than Fort Knox, but he was also killed,” noted Ishchenko.

Ukraine to close criminal proceedings against assassinated terrorist leader Zakharchenko 16:54, 02 September 2018 POLITICS 15 0 Zakharchenko was killed in a blast in a cafe in the Russian-occupied city of Donetsk on August 31. Ukraine’s Prosecutor General’s Office / Photo from UNIAN Ukraine’s chief prosecutor Yuriy Lutsenko has announced the Ukrainian authorities are going to close criminal proceedings against recently assassinated leader of the self-proclaimed “Donetsk People’s Republic” (“DPR”) Alexander Zakharchenko. “A procedural decision will be made in [his] criminal proceedings. I think we will do it quickly and with the feeling that the punishment had been imposed on… Read more »

Has anyone read the rubbish written by the saker on his blog about the murder of AZ?

To the peoples of Lugansk and Donetsk Fight as your forefathers have fought the same fascist scurge many decades before. You’re time is now. You have nothing to lose as those who oppose you will give you nothing. Fight and fight to the last.

Russia continues crime witnesses purge in Donbas – Gerashchenko 15:40, 01 September 2018 POLITICS The Ukrainian side expects to hear from the OSCE details of yesterday’s explosion in Donetsk. The murder of the so-called “DPR leader” Alexander Zakharchenko testifies that Russia continues liquidating witnesses of its crimes in Donbas, Vice Speaker of the Verkhovna Rada of Ukraine Iryna Gerashchenko said. On her Facebook page, Gerashchenko noted that the Ukrainian side seeks to see all militant leaders and their curators from Russia tried in The Hague. However, Russia is eliminating witnesses of its crimes, she added. “For 9 months, nothing at… Read more »

I ought to insist. I consider ColinNZ stated it masterfully below. “It beggars belief that so many key figures (heros) have so easily been disposed of… I agree with the Saker now, and 2 years ago regarding the assassinations of Givi and Motorola. SOMETHING IS SERIOUSLY LACKING IN DPR/LPR BASIC SECURITY PROTECTION OF MILITARY AND POLITICAL LEADERS.” I have already read too many exculpatory considerations that make me feel sick. We need to hear about responsibility and accountability. Both Donetsk and above all Russia can and must improve intelligence and security in Donbass urgently. This is war, an integral part… Read more » 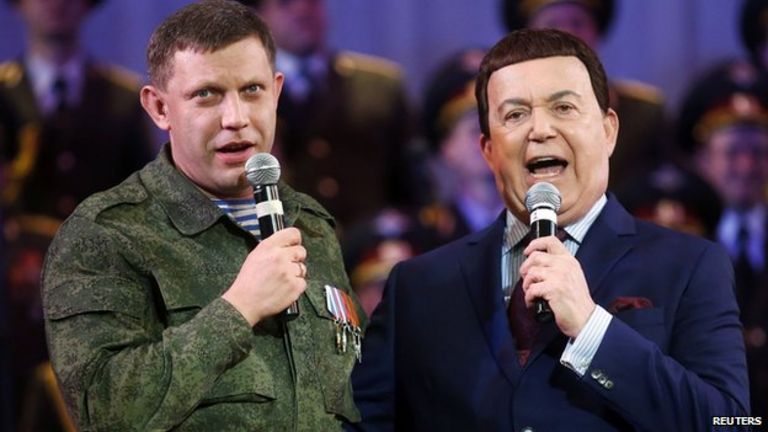 Great, in 4 days these nazzi-Stalinists were gone!

The title to the article (header) sounds like it could have been a gas explosion accident..

Batman, Givi, Motorola, and now the great DPR leader Zakharchenko.. How many more are to be assassinated by these vile ukrops, Poroshenko, Turchinov, Parubuy, and the rest of the zio-nazi filth??..

It is long past time for Putin to let the Novorossiyan gloves come off, and to assist LPR and DPR in hitting the khazar Banderasts very, very long and very, very hard.
(But then of course, there’s all those gas and oil profits to think about)

I agree with the Saker now, and 2 years ago regarding the assassinations of Givi and Motorola. SOMETHING IS SERIOUSLY LACKING IN DPR/LPR BASIC SECURITY PROTECTION OF MILITARY AND POLITICAL LEADERS. It beggars belief that so many key figures (heros) have so easily been disposed of.

He was one of the greatest heroes of our time. This is a crime that must not go unpunished.

RIP Alexander Zakharchenko. Thank you for showing us all, determination, strength, dignity, pride, loyalty, plus, humanity. Alexander Zakharchenko, deepest sympathy to your loved ones and family. Tribute to Alexander r Zakharchenko, who never let the savages stop him from living. [eng subs] DPR PM Alexandr Zakharchenko talks to mother of the captive UAF ‘cyborg’… https://www.youtube.com/watch?src_vid=FD15bxM3mTc&v=in-GUuFTyJA [eng subs] Alexandr Zakharchenko and Givi visit the New Terminal of Donetsk Airport… https://www.youtube.com/watch?v=mdABmuJLils [eng subs] Motorola & Givi awarded with Golden Stars of Heroes of DPR… These brave men, taught me so much, with regards pride, loyalty, determination, strength, plus, humanity. So sorry for… Read more »

It has been reported that NATO trainers have been instructing Ukraine military operatives in bomb-making in the west of the country.

Whoever takes the reigns of the DPR needs to take a pound of flesh from the Junta. This can’t go unanswered. Time to hit one of NATO’s favorite Banderist proxies or a whole lot of them at once.

May the Lord Almighty grant rest eternal to the soul of this departed Orthodox Warrior. Vechnaya Pamyat.