Iran celebrated the one-year anniversary of President Trump officially withdrawing the US from the JCPOA – or the Iran deal, as it’s better known – by suspending its commitments under the 2015 treaty, an unprecedented escalation from Tehran that will almost certainly alienate the other signatories, who had pledged to do everything in their power to keep the deal intact.

With an American aircraft carrier idling in the Mediterranean and a team of B-52 bombers on standby, Iran goaded the US to strike by announcing that it would start retaining its enriched uranium and heavy water stocks instead of selling them abroad. President Hasan Rouhani also threatened to start increasing production of enriched uranium within 60 days unless the other treaty partners meet commitments related to oil purchases and other financial arrangements, something that will be almost impossible to do now that the US has ended export waivers on Iranian oil.

Iran informed France, Germany, Russia, China and the UK, the remaining parties to the treaty, of its decision early Wednesday. Foreign Minister Javad Zarif insisted that Iran was within its rights to suspend the deal now that the US had reimposed all economic sanctions, and added that it was now up to Iran’s European partners to act.

On May 8 2018, US withdrew from #JCPOA, violated #UNSCR 2231 & pressured others—incl #E3—to do the same
After a year of patience, Iran stops measures that US has made impossible to continue
Our action is within the terms of JCPOA.
EU/E3+2 has a narrowing window to reverse this.

While China and Russia blamed Washington for Iran’s decision, France’s Defense Minister said France would likely have little choice but to join the US in reimposing sanctions on Iran.

However, Chancellor Angela Merkel’s government said it hopes to preserve the deal: “We call on Iran not to take any aggressive steps that would add to tensions in the region.”

Last night, the State Department revealed that Mike Pompeo had abruptly traveled to Iraq after cancelling a meeting with Angela Merkel following reports that Iran was “escalating” their activity.

While Rouhani tried to spin the decision as “a new step within the framework of the deal”, and insisted that Iran wasn’t withdrawing from the agreement, he warned that Iran’s partners would face a “very decisive reaction” if Iran’s case was referred to the UN Security Council. Analysts said Iran was stopping just short of giving Trump what he wants – that is, a complete Iranian withdrawal from the deal.

As one analyst told the BBC, Iran’s decision is a reaction to the ‘growing economic pain’ it has faced since the US reimposed sanctions. 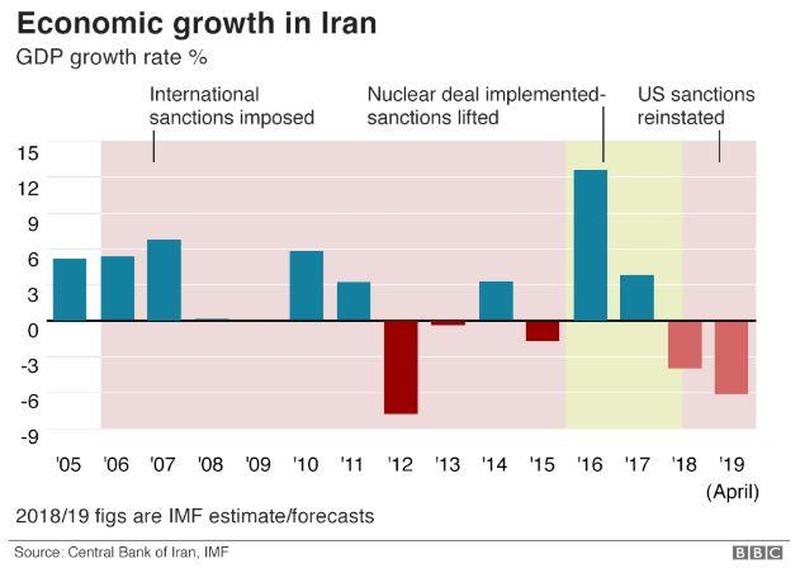 President Trump has threatened retaliation should Iran re-start its nuclear weapons program, and Iran’s Wednesday announcement that it’s planning to do exactly that explains Washington’s recent warnings about the intensifying security threat. We now wait to hear from President Trump to see if Washington will respond by sending still more military reinforcements to the region, which could escalate the spat to the point of a possible hot war.

Washington must be taught – one way or another – that it does not rule the world, and that its jurisdiction extends only to US territory.

Just as bad as Washington are the governments that kowtow to it, as their craven and servile obedience encourages its megalomania.

Only nations without nuclear weapons get attacked by the US. I think Iran knows what to do. Libya’s Gaddafi was rewarded for given up his weapons programs by literally being sodomized with a butcher knife.

Iran has the right to fully practice what it wishes in every field .

Even while peddling war, Pompeo wants to oblige Iraq to buy US LNG instead of buying less expensive Iranian piped gas! That will turn out to be a vain hope. Pompeo hasn’t understood yet that the Sunni Shia divide exists only with SA; the other ME countries overcame that divide and work together to improve each other’s lives. Iraq is majority Shia and does not want a war. Neither does Sunni Qatar who has joint gas exploration plans with Iran. SA in turn is already overstretched in Yemen and an unlikely party to fight a war on Iran. Israel will… Read more »

Iran is doing the right thing: making it clear to the EU, Russia and China that Iran will not be bound by the JCPOA while they don’t hold their end up. With respect to the US who prevents Iran from selling its heavy water and enriched uranium abroad to keep smaller quantities than required for a bomb, Iran makes the implications of Trump’s sanctions hilariously clear. Trump and his team of stooges apparently never read the nuclear agreement with Iran.