On Tuesday, May 31st, U.S. President Joe Biden headlined an op-ed in the New York Times, “What America Will and Will Not Do in Ukraine”, and announced “I’ve decided that we will provide the Ukrainians with more advanced rocket systems and munitions that will enable them to more precisely strike key targets on the battlefield in Ukraine.” He didn’t say that these weapons would enable Ukraine to invade Russia, but they would, and Russia knew it.

Later on May 31st, Politico headlined “Biden: U.S. will provide precision rockets to Ukraine: The rockets are to be used solely in Ukraine, not against targets within Russia”, and reported that “Kyiv has given the United States assurances that the new weapons will be used in Ukraine and not against targets in Russia, senior administration officials told reporters after Biden’s op-ed was published.”

On June 1st, Russia’s RT News headlined “Russia sounds alarm on risk of direct conflict with US”, and reported that,

Washington’s arming of Ukraine with heavier weapons increases the risk of direct US-Russia confrontation regardless of American statements about mitigating such a possibility, Russian Deputy Foreign Minister Sergey Ryabkov said on Wednesday.

The diplomat was commenting on the news that the US has decided to supply HIMARS multiple rocket launchers to Ukraine. Washington has insisted that the weapons system will not allow Ukrainian forces to attack Russia and argues it prevents a scenario in which Moscow would consider the US a party to the conflict.

“We’re not providing any weapons that will allow the Ukrainians to attack Russia from inside of Ukraine, and President [Joe] Biden has been very clear on that,” US representative to the UN Linda Thomas-Greenfield said of the deliveries. “We’re not going to become [a] party to the war.”

Ryabkov disagreed with the rationale, saying the US was making the conflict more dangerous.

“Any arms supplies, which continue and escalate, increase the risk of such a development,” Ryabkov told journalists, referring to the possibility of a direct confrontation between Russia and the US.

A few hours after that, RT headlined on June 1st, “Kremlin responds to Ukraine’s pledge on US arms: President Zelensky cannot be trusted not to use weapons to attack targets in Russia, Moscow says”, and reported that,

Ukraine cannot be trusted to abide by Washington’s wishes and not use US-supplied rocket launchers against targets in Russia, Kremlin spokesman Dmitry Peskov said on Wednesday. Kiev has a poor record on keeping its word, the official claimed.

Peskov was commenting on the US decision to provide Ukraine with HIMRAS multiple rocket launchers. US officials stated that the weapon systems would not be used against targets in Russia, arguing that this made Washington not a party to the Ukraine conflict.

Ukraine’s President Volodymyr Zelensky pledged to honor the US assurances when he spoke to Newsmax.

“We’re not interested in what’s happening in Russia,” he said in an interview published on Wednesday. “We’re only interested in our own territory in Ukraine.”

When asked about the promise, Peskov said Russia didn’t trust Zelensky to keep his word.

“Unfortunately, such a thing is not what our experience suggests,” he said. Zelensky has been breaking his word throughout his relatively short political career, “starting with his main election campaign promise to put an end to the war in southeastern Ukraine,” Peskov said.

Yet later in the day on June 1st, Reuters headlined “U.S. to send precision rockets to Ukraine”, and reported that,

A senior Biden administration official said the new supplies – which comes on top of billions of dollars worth of equipment such as drones and anti-aircraft missiles – included the M142 High Mobility Artillery Rocket System (HIMARS), which Kyiv has said is “crucial” to counter Russian missile attacks.

Addressing concerns that weapons such as HIMARS could draw the United States into direct conflict, Jonathan Finer, deputy White House national security adviser, said Washington had asked Ukraine for assurances the missiles would not strike inside Russia.

Russia, however, warned of an increased risk of direct confrontation with the United States. read more

“We believe that the United States is purposefully and diligently adding fuel to the fire,” Kremlin spokesman Dmitry Peskov told reporters, adding that such supplies would not encourage Ukraine’s leadership to resume stalled peace talks.

Shortly after the U.S. decision was announced, the Russian defence ministry said Russia’s nuclear forces were holding drills in the Ivanovo province, northeast of Moscow, the Interfax news agency reported.

Some 1,000 servicemen were exercising in intense manoeuvres using more than 100 vehicles including Yars intercontinental ballistic missile launchers, it cited the ministry as saying. The report did not mention the U.S. decision.

As regards the question of what will be following from here, that will depend primarily upon what Washington’s actual objective is.

“If neither U.S. nor Russia will accept defeat in Ukraine, there will be WW III — nuclear war.”
This statement makes absolutely no sense whatsoever. Why should Russia “accept defeat” when it is fully in the process of winning? The ones who need to accept defeat are the demented American’ts, who shouldn’t even be involved in this military operation to begin with. But they won’t, because they are not only crazy, but extremely evil as well. THAT’S why we will have a WWIII ..and not for any other reason.

I doubt that this situation will lead directly to WWIII. I understand the neocons are nuts but whether they are totally suicidal is another question. And everyone seems focused on WWIII as being a nuclear rendition of WWII. How about limited nuclear war. The Russians can simply say: “There will be a buffer zone between us and NATO. Whether it is radioactive or not is up to you.”

Ultrafart the Brave
Reply to  penrose

I doubt that this situation will lead directly to WWIII. Exactly. Whatever is now happening is just a prelude to future developments. We’ve yet to see the consequences of the European Union’s suicidal sanctions play out upon the economic landscape, and the WEF has more “deadly pandemics” and “climate crises” to spring on the world in the meantime. AND we’ve yet to see things boil over around China in the Pacific. Economic collapse, starvation, tyranny and civil strife, wars and rumors of wars, all mixed in with the Globalists’ push for the Mark of the Beast (it doesn’t matter if… Read more »

If not to attack Russia, what will the Ukrainians do with the 40 billion in weapons? Sell them in Syria to kill Russians in Syria?

When the Russians and Poles finish splitting up the Ukraine, there won’t be enough space left to store 40 Billion in weapons. But this supposed aid will end up mainly in the pockets of crooked people and not in hardware. And the Military/Intelligence/Industrial/Political/Media Complex might make out like bandits. 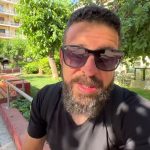 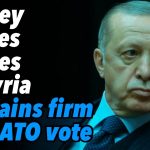