John Maynard Keynes, as a young adviser to the UK Treasury, successfully predicted another great conflict in Europe after what transpired at the so-called peace of Versailles. In preparation for the conference, Keynes argued that it would be better for Germany to owe no reparations, or a maximum of 2 million pound sterling at the most. He was in favor of a general forgiveness of war debts, including for Britain. Lastly, he wanted the US Government to begin a large credit program to quickly restore Europe to prosperity. But the Allies argued differently, and here is what they insisted on in Article 231 of the Versailles treaty on war debt (1919).

Let’s compare the cold sentiments of Versailles to the peace of Westphalia from 1648, which put an end to the Thirty Years’ War.

Article I: “[…] And this Peace must be so honest and seriously guarded and nourished that each part furthers the advantage, honor, and benefit of the other… A faithful neighborhood should be renewed and flourish for peace and friendship, and flourish again.”

Article II: “On both sides, all should be forever forgotten and forgiven. What has from the beginning of the unrest, no matter how or where, from one side or the other, happened in terms of hostility, so that neither because of that, nor because of any other reason or pretext, should commit, or allow to happen, any hostility, unfriendliness, difficulty, or obstacle in respect to persons, the status, goods, or security himself, or through others, secretly or openly, directly or indirectly, under the pretense of the authority of the law, or by the way of violence within the Kingdom, or anywhere outside of it, and any earlier contradictory treaties should not stand against this. Instead, all and every, from here as well as from there, both before as well as during the war, committed insults, violent acts, hostilities, damages, and costs, without regard of the person or the issue, should be completely put aside, so that everything, whatever the one could demand from the other under his name, will be forgotten in eternity.”

Keynes described the Versailles conference as a clash of values and world views among the principal leaders, “the cynical traditions of European power politics [vs] the promise of a more enlightened order.” Keynes held Woodrow Wilson as the game maker. “When President Wilson left Washington he enjoyed a prestige and a moral influence throughout the world unequalled in history. […] The enemy peoples trusted him to carry out the compact he had made with them; and the Allied peoples acknowledged him not as a victor only but almost as a prophet. In addition to this moral influence the realities of power were in his hands.”

In 1919, Keynes wrote The Economic Consequences of the Peace in which he criticized the Versailles treaty and its authors, while accurately predicting its grave socio-economic and political effects: high inflation, stagnation, and revanchism. He had two main points: that the treaty made it economically impossible for Europe to revive itself, and that the Allies had betrayed the tenets of the Armistice, in which they pledged to the defeated side a degree of fairness with regard to territorial and economic impositions. He judged these violations as a stain on the honor of the Allies and a primary cause for a future conflict. His prediction, that another war would begin in the next twenty years, was surgically precise.

“Lenin is said to have declared that the best way to destroy the Capitalist System was to debauch the currency. By a continuing process of inflation, governments can confiscate, secretly and unobserved, an important part of the wealth of their citizens. By this method they not only confiscate, but they confiscate arbitrarily; and, while the process impoverishes many, it actually enriches some. The sight of this arbitrary rearrangement of riches strikes not only at security, but at confidence in the equity of the existing distribution of wealth. […] Lenin was certainly right. There is no subtler, no surer means of overturning the existing basis of society than to debauch the currency. The process engages all the hidden forces of economic law on the side of destruction, and does it in a manner which not one man in a million is able to diagnose. […] Economic privation proceeds by easy stages, and so long as men suffer it patiently the outside world cares very little. Physical efficiency and resistance to disease slowly diminish, but life proceeds somehow, until the limit of human endurance is reached at last and counsels of despair and madness stir the sufferers from the lethargy which precedes the crisis. The man shakes himself, and the bonds of custom are loosed. The power of ideas is sovereign, and he listens to whatever instruction of hope, illusion, or revenge is carried to them in the air. […] But who can say how much is endurable, or in what direction men will seek at last to escape from their misfortunes?”

Woodrow Wilson’s Fourteen Points [of the Armistice] had been widely disseminated in Germany prior to the end of the war, and were well known by the German public. Sadly, these promises turned out to be nothing but propaganda. The clear gap between this document and the final treaty of Versailles caused great anger in Germany and fueled ultra nationalist sentiments.

There’s a prevalent myth out there, which states that the nazis came to power in Germany due to hyperinflation. It can be easily debunked through the following observations…

Germany did experience hyperinflation in the early 1920s. By October 1922, the mark stood at 130 billion to the dollar. Marks had to be carried in wheelbarrows and life savings were wiped out. Yet the inflationary spiral was brought under control in November 1923 largely through the efforts of Hjalmar Schacht, currency commissioner and president of the Reichsbank and Finance Minister Hans Luther. For an in depth explanation of their policies, see this previous article.

With inflation in check by 1924, Germany entered a time of relative growth. Hitler, while active in German politics, was consigned to the political fringe. Beginning in late 1929, the German economy fell victim to the Great Depression. Industrial production, employment, and sales fell in the early ’30s , while Hitler’s support increased. Price inflation was nonexistent. Rather, by 1933, when Hitler became Chancellor, prices were going down as a result of collapsing demand. Price deflation is good when nominal economic growth is positive, not negative. Tight credit and tremendous unemployment left millions of people with very few marks to spend on anything.

What brought the nazis to power if not hyperinflation? Austerity! During the years of skyrocketing prices, the percentage of the nazis [NSDAP] ranged below 4 percent (see the 1928 elections). The Government imposed harsh austerity measures in the early 1930s [after the hyperinflation had been reined in]; this increased unemployment drastically and it also gave the nazis their first success (18.5 percent in September 1930). Two years later, the ever growing levels of unemployment and poverty drove Hitler to 37.2 percent in the 1932 elections. This graph speaks for itself. 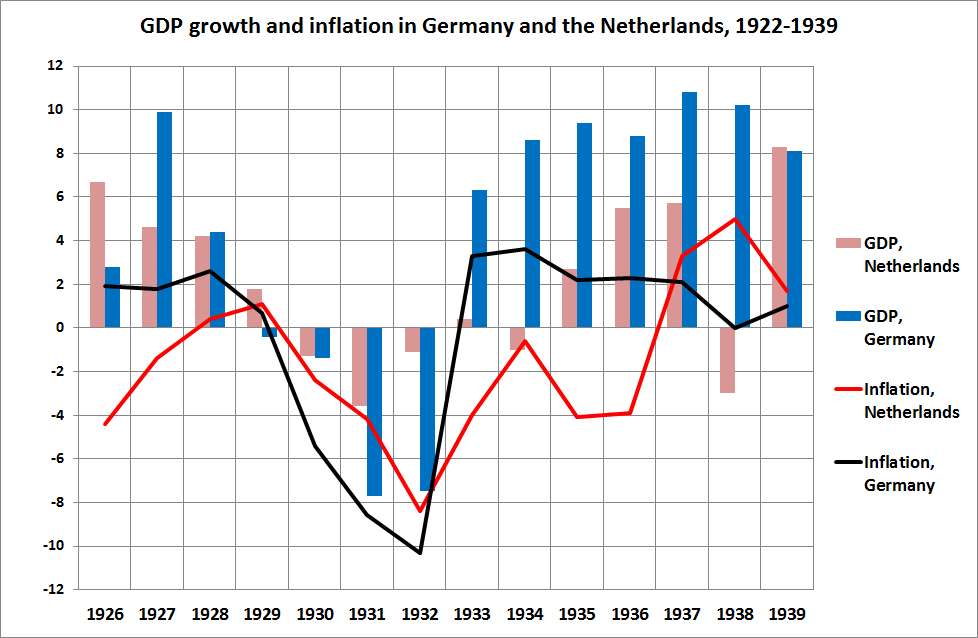 In 5 years time (between ’33 and ’38), the Nazi Government rebuilt the army, built industries and infrastructure, eliminated unemployment, real wage growth was in the double digits – and all of this in a climate of price stability. As such, contrary to popular mythology, the hyperinflation years didn’t bring the nazis to power. What brought them to power was private debt deflation in combination with harsh fiscal austerity. The end of WW1 wasn’t the end of ‘the war to end all wars.’ Sadly, it was the groundwork for a new one, far deadlier than the first.

In an interview with William Buckley, the founder of the British Union of Fascists, Oswald Mosley, explained why Hitler got into power in Germany and why he didn’t in the UK.

“When I began, in the following six years, right until Roosevelt’s doubling of the price of gold and many other things of that sort, unemployment in Britain was halved. Those six years before Hitler came to power, unemployment in Germany was quadrupled. Now, all those things, and your analysis of the English character, simply depend on the economic situation. Neither fascism, communism, nor any new policy, whether decent, humane, or not, will succeed ever, unless you have a grave economic crisis. That’s the only thing which moves people at all.”

Liberals are so terrified of the profound psycho-political impact of economic crises [second only to war itself and similar in some ways], they dare not speak of such phenomena even when they are happening, nor admit that crises, even unmediated, have severe psychological consequences. The liberals practice this fetishistic disavowal. That’s why the status quo [the so-called center left and center right] is so dangerous to public order and peace itself. It’s a paradox, and paradoxes are nature’s way of telling us [observers] that we’re missing something, that something new waits to be discovered. By shunning alternate points of view and trying to silence them outright, the center misses the dialectic and loses the moral legitimacy in the eyes of increasingly larger sections of the population. I personally hold the creditors of the Versailles treaty, Britain, France, and the US, responsible for nurturing what was to become the most devastating conflict in human history.

The Peace of Westphalia ended the 30 years war, but also contained another treaty in it, the Peace of Munster, signed in the same year 1648, which ended the 80 years war.

“[Keynes] had two main points: that the treaty made it economically impossible for Europe to revive itself…”

Which, of course, was exactly what Washington desired.

“What brought the nazis to power if not hyperinflation? Austerity!”

Exactly so! It’s not for nothing that the Horst Wessel Lied contains the words:

(“Millions are looking upon the swastika full of hope,
The day of freedom and of bread dawns!”)

Not much about world domination in those two lines, at any rate.

“The end of WW1 wasn’t the end of ‘the war to end all wars.’ Sadly, it was the groundwork for a new one, far deadlier than the first”. I would go so far as to say that the period 1919-1939 was merely a half-time interval, in which the competing nations were able to replenish their resources – including of course a whole new generation of young men for cannon fodder. It wasn’t only Keynes who made the prediction that peace would last for just 20 years. ‘This is not a peace, it is a 20-year truce (or “armistice”)’. – Marshal… Read more »

Winston Churchill supported the same analysis in the opening part of his book The Second World War.