When I was growing up in the US during the 1960’s, 1970’s and 1980’s, one of the prized freedoms we often and repeatedly talked about was the right to pray to God as one understands God, to be free both to go to the church of your church and to be free from going to the national church by requirement. Sure, this led to a pluralistic society, and sure, there are major challenges for each faith group in competition with other such groups and with the predominant secularism in the US, but believers have always had the freedom to pray and worship as they like.

The coronavirus pandemic brought in a wide series of restrictions against gathering in public places all over the world. In our own series on the rightness or wrongness of Orthodox Christian places of worship closing due to government regulations, we noted that the restriction on religious worship is not particularly directed at Christians only. Mecca is closed, the Indian, Japanese and some Jewish religious activities have all shown the effects of COVID-19 prevention regimes.

However, in the United States, we now have elected leaders violating the principles set forth in the Constitution, namely, the very first Amendment:

“Congress shall make no law respecting the establishment of religion, or prohibiting the free excercise thereof; or abridging the freedom of speech, or of the press; or the right of the people peaceably to assemble, and to petition the Government for a redress of grievances.”

Instead, we have governors ordering churches closed, people fined and even arrested for going, and in places like Mississippi, the sentiment against Christian churchgoers has turned particularly nasty. A parish was burned to the ground, acccording to The New York Times:

The burning of a church in northern Mississippi this week is being investigated as arson because of a spray-painted message at the scene that seemed to criticize the church’s defiance of coronavirus restrictions.

First Pentecostal Church had sued the city of Holly Springs, Miss., which is about an hour southeast of Memphis, arguing that its stay-at-home order had violated the church’s right to free speech and interfered with its members’ ability to worship.

After firefighters put out the blaze early Wednesday, the police found a message, “Bet you stay home now you hypokrits,” spray-painted on the ground near the church’s doors, according to Maj. Kelly McMillen of the Marshall County Sheriff’s Department.

A photograph of the graffiti also appears to show an atomic symbol with an “A” in the center, which is sometimes used as a logo for atheist groups.

One thing this clearly proves is that bigots cannot spell correctly. 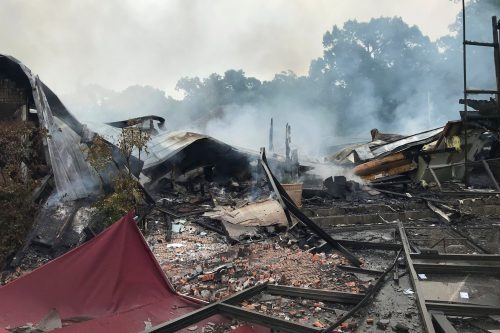 But it also proves there is a great deal of animosity against Christians. This kind of attack would not have taken place even ten years ago, but now the anti-Christian climate in the United States is such that incidents like this are looking for ways to happen.

This video shows how embedded anti-Christian attitudes are now in the press corps at the White House. Watch as Press Secretary Kayleigh McEnany deftly and forcefully handles the ferocious accusations that go beyond First Amendment sensibilities.

On Friday, May 22nd, President Trump called on state governments to allow churches to open, and has also threatened to override any state that refuses to do so. Here is what he said, with emphasis added:

Thank you very much. At my direction, the Centers for Disease Control and Prevention is issuing guidance for communities of faith. I want to thank Dr. Redfield and the CDC for their work on this matter and all the other work they’ve been doing over the past what now seems like a long period of time. Today I’m identifying houses of worship, churches, synagogue and mosques as essential places that provide essential services. Some governors have deemed liquor stores and abortion clinics as essential, but have left out churches and other houses of worship. It’s not right. So I’m correcting this injustice and calling houses of worship essential. I call upon governors to allow our churches and places of worship to open right now.

If there’s any question, they’re going to have to call me, but they’re not going to be successful in that call. These are places that hold our society together and keep our people united. The people are demanding to go to church and synagogue, go to their mosque. Many millions of Americans embrace worship as an essential part of life. The ministers, pastors, rabbis, imams and other faith leaders will make sure that their congregations are safe as they gather and pray. I know them well. They love their congregations. They love their people. They don’t want anything bad to happen to them or to anybody else. The governors need to do the right thing and allow these very important, essential places of faith to open right now for this weekend. If they don’t do it, I will override the governors. In America, we need more prayer, not less. Thank you very much. Thank you.

President Trump has this basic point right: without prayer to God, our nation is sunk. And it is, indeed, amazing how vile and anti-Christian our supposed “best and brightest” have turned out to be. Incidentally, the press and “Experts” are saying that the president has no power to make this stick. They are wrong. In the spirit of the First Amendment, he absolutely does have the power to make this order stick.

The Liberals want the Churches Closed.

Who cares? What about addressing the wide spread anti Christian attacks by joos in the US’s favourite state, Israel?

An Eye for an Eye

If the guy in the pew behind me coughs, do I turn around and deck him or just turn the other cheek, so I can get a double dose?