Despite the civil unrest in France to start the year, the country’s richest citizens still had a fantastic start to 2019, according to Bloomberg.

Amidst protesters taking to the streets to demand higher wages and better pensions, the 14 people from France on the Bloomberg Billionaire’s Index added a combined $78 billion to their collective net worth since the beginning of 2019. That is an astounding 35% increase. The figures will likely serve as additional fuel for protests over income inequality in the country.

France’s pace was more than double China’s richest, who saw growth of 17% for the first six months of the year. The richest in the U.S. saw their wealth grow 15% during the first half the year. 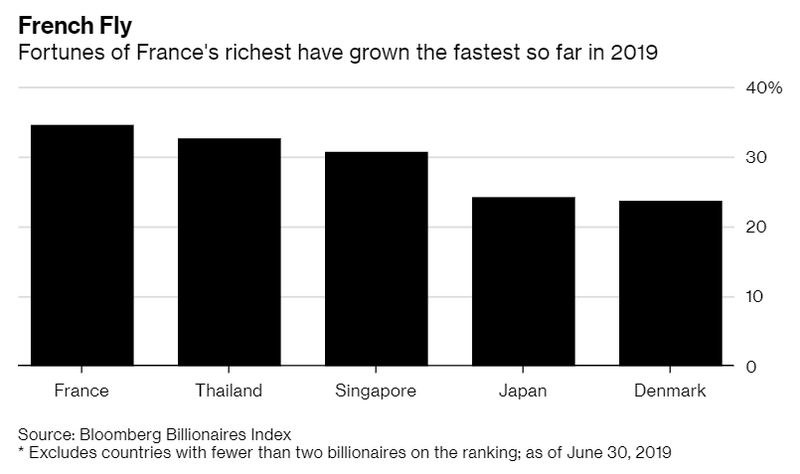 Outside of France, the other highest returns came from Thailand at 33% and Singapore, who came in at 31%.The richest in Japan saw their wealth grow 24%. The only Nigerian on the list, Aliko Dangote, saw his wealth up 60% so far in 2019.

Specifically in France, luxury businessmen Bernard Arnault and Francois Pinault, combined with cosmetics heir Francoise Bettencourt Meyersedit combined to make up $53 billion of the growth. The demand for luxury goods from China has continued even though there has been uncertainty from the ongoing trade war. Arnault’s LVMH shares are up 45% this year, making the company the second best performer in France’s CAC 40 index. He joined Jeff Bezos and Bill Gates as the only people that have fortunes of over $100 billion.

Thailand’s success was a result of Charoen Sirivadhanabhakdi, founder and chairman of TCC Group. Sirivadhanabhakdi’s net worth rose by $4 billion to $16.5 billion as shares of his company, listed in Singapore, were up 38%.

I’m working on a recipe. You know the one with a basket full of chopped lettuce and French dressing. You know…the guillotine

Adding fuel to an extreme perilous situation. The fuse has been lit – a matter as to when all this will explode in a massive social revolution…guillotines and all.