The co-founder of Facebook has stepped up his attack on Mark Zuckerberg just days after calling on the United States government to break up Facebook, according to Bloomberg. Chris Hughes, 35, who started Facebook with Zuckerberg said in an interview to CNN: “Zuckerberg has too much power — near-unilateral power. We all make mistakes, but I think that in his case it is different because there is no accountability for those mistakes.”

Hughes – perhaps in a bid to stay relevant, perhaps with altruistic intentions – has wound up in the center of a debate about how the government should regulate the social media company after writing a May 9 op-ed in the New York Times calling Facebook a monopoly that “never should have been allowed to buy a Instagram and WhatsApp”.

The Federal Trade Commission is already expected to fine the company as much as $5 billion as part of a settlement over letting Cambridge Analytica obtain data on millions of users without consent. During a recent interview with CNN, Hughes said that issues at Facebook are far deeper than any one individual scandal. He said that a lack of accountability from Mark Zuckerberg and a board that is unable to institute any checks and balances are both to blame.

He continued: “Mark’s the CEO, there is a board but because he owns 60 percent of the voting shares he’s not accountable really to that board. It works more like a board of advisers than anything else.”

Zuckerberg said on Friday that his company would work with governments to determine what content is acceptable on social media, after a meeting with French president Emmanuel Macron. Facebook has been widely criticized across Europe for how it handles personal data and hate speech.

Hughes launched his assault on Facebook last week when he published a scathing Op-Ed, in which as we reported, he slammed the world’s biggest media company.

In the op-ed, Hughes emphasized that he believes Zuckerberg is a kind and well-intentioned person, but that Facebook has become too powerful – in terms of its market dominance and its influence on public life – that the only reasonable solution would be for the government to step in

“I don’t think that Mark Zuckerberg can fix Facebook,” Hughes said. “I think only government can – by making the market more competitive, by breaking it up, and by creating these privacy restrictions.”

As it stands, the market isn’t well-equipped to punish Facebook for its misdeeds (just look at how all of those ‘Delete Facebook’ campaigns turned out).

“Because Facebook so dominates social networking, it faces no market-based accountability. This means that every time Facebook messes up, we repeat an exhausting pattern: first outrage, then disappointment and, finally, resignation.”

Hughes recounted how, during Facebook’s early days working out of an office on Emerson Street in downtown Palo Alto, Zuckerberg would describe his goals for Facebook as “domination.” 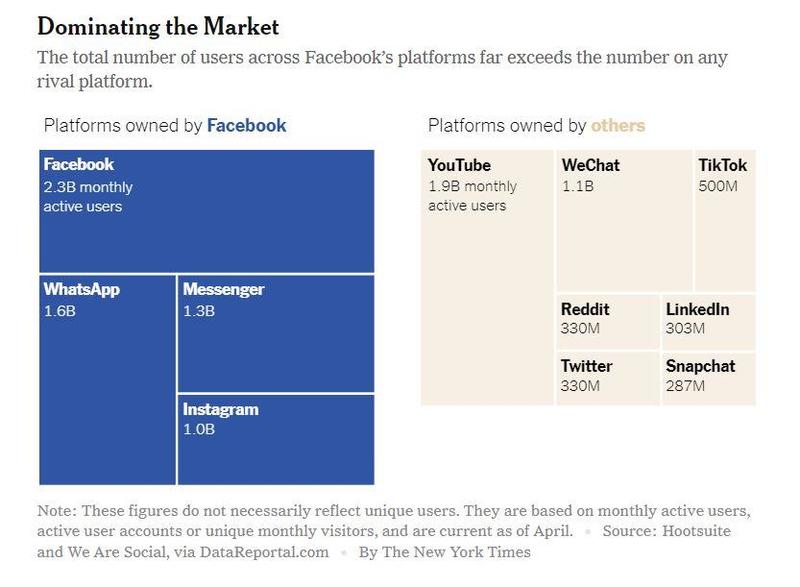 15 years later, the company has succeeded.

Over a decade later, Facebook has earned the prize of domination. It is worth half a trillion dollars and commands, by my estimate, more than 80 percent of the world’s social networking revenue. It is a powerful monopoly, eclipsing all of its rivals and erasing competition from the social networking category. This explains why, even during the annus horribilis of 2018, Facebook’s earnings per share increased by an astounding 40 percent compared with the year before. (I liquidated my Facebook shares in 2012, and I don’t invest directly in any social media companies.)

In a response to Hughes explosive editorial, Facebook issued a statement arguing that it shouldn’t be broken up because – in short – it is a “successful American company.”

Raise your hand if you think Zuckerschmuck has been selling your (Facebook users, even to comment) manipulated and analyzed personal information for as long as Facebook exists.

Facebook was developed by DARPA as the Lifelog program therefore funded by US taxpayers. This classic sock puppet has handlers, which is why he appears so dim witted. It’s time all this came out, the guy is actually a high level criminal.