America’s obsession with race, in particular racial slurs, is a wonder to behold. Last month, a black volleyball player from Duke University claimed to have heard someone repeatedly shouting one at her during a match with Brigham Young University. The important word here is repeatedly, because anyone can mishear a word or a phrase, but not repeatedly. The really curious thing about this particular repeatedly parroted racial slur is that Rachel Richardson was the only person in the arena to hear it.

As might be expected, the University carried out an intense investigation with the result that…no one else had heard it, period. What can this mean? Well, it could mean that Richardson was in a dream state having travelled over two thousand miles to play this match. Perhaps she is schizophrenic. Or perhaps she is simply lying. Credence was given to that latter suggestion when it was revealed that Richardson’s godmother is active in politics and has never been shy about using the odd racial expletive herself – against crackers! This view is cemented further by the interview Richardson gave to Good Morning America when she spoke about an unsafe environment. Here’s a clue, honey, guns can kill you, mere words can’t.

One pundit said she was a bigger liar than Jussie Smollett, which is a little over the top because she didn’t hire two black dudes to rough her up and hang a noose around her neck, but the point should be taken. Having said that, people with long memories will recall an even more outrageous hoax associated with Duke University, one that didn’t really have a racial angle.

In March 2006, members of the Duke lacrosse team hired two exotic dancers for a late night bash. Very few lacrosse players are black, and all these dudes were white. The dancers, both of them black, turned up at the off-campus venue around 20 minutes to midnight. The show ended around 5 past when one of them collapsed.

The other dancer drove her partner to hospital where she claimed to have been gang-raped. She was clearly off her head and had by her own admission taken at least one drug.

Although there was no physical evidence that Crystal Mangum had been raped vaginally, orally or anally (she claimed all three), there was DNA evidence that she had recently had intimate contact with four males, none of them the men she had accused. This case led to an enormous scandal, not just because the accused (who were all innocent) were pilloried by the University – staff as well as students – but because the district attorney decided to use it to make a name for himself. Indeed, at the end of the day he was the only person to end up behind bars, in addition to being disbarred from practising law. Reams have been written about this case, and you will also find much video about it on YouTube.

Seven years later, Mangum was convicted of murdering her lover, for which she received a maximum of 18 years. Duke University learned nothing from that hoax; let us hope they learn something from this one.

If Duke “learned nothing” from one of the biggest, and fakest, scandals there ever has been… what makes anyone think they’ll “learn” from this? They won’t! 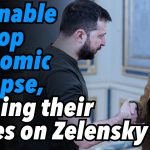