When the novel coronavirus first made its appearance in Wuhan, China, it was newsworthy, but it seemed difficult to trust the information coming out of China, due to its communist governmental structure. To some extent, this suspicion appears to have been justified, as one of the main doctors who warned his own government about the danger of this virus just died from it. Now the virus appears to be making rapid advances in free nations, most notably Italy, South Korea and Japan, and in Iran, sadly taking the life of one of Ayatollah Khameini’s top advisers on Monday morning, March 2nd. It also is making headway in the United States, having claimed six lives there over the past weekend and into this week (updated March 3rd, 2020).

There are still gaping holes in our body of reliable information about this virus, its activity and effects on people. This is exacerbating a real period of turmoil in the world’s markets, with the Dow Jones marking a drop of more than ten percent in one week last week, travel being sharply curtailed from many of the infected regions to relatively clear ones, and so on.

We hope to periodically chronicle this story until it come to its resolution point.

Any real news on the origin of the virus?

As yet, there is no direct news conceringing where coronavirus originated, or how. The present narrative still is that story of the virus arising from some sort of transmission from the sale of bats and pangolins in a Wuhan market.

It is probably not presumptuous to say that no one who is paying close attention to this story believes this claim. The market was not actually selling such products that would have the virus in the first place. However, a story trying to gain traction among some folks, and from fairly reputable sources, that this virus was an American bioweapon attack against China over trade issues, is equally unreliable, though certainly sensational.

It is also stupid, given that bioweapons do not usually care who they kill. The very nature of a virus is to self-replicate, and viruses do not consider one’s country, age, sex or political affiliation while they travel from host to host.

However, the notion that the virus originated in a biolab in Wuhan does seem to be quite likely. Here is why:

All that being said, the likely origin of the virus will eventually be known to more people than those directly involved with it if it were a secret project. Right now, though, this hardly matters other than to note that as a bioweapon, coronavirus seems to be relatively benign, for its fatality rate seems to be around two percent. The only possible benefit from such a virus is its ability to immobilize a population for some period of time, without major fatalites, but with debilitating illness for several weeks. This would make better sense as a viable bioweapon – something that severely sickens – but doesn’t wipe out – everyone on the planet.

That being said, the stupidity factor of such bioweapons still comes into play: that inability to control the virus and restrict it or completely cut it off once its deployment has achieved its purpose.

The Chinese government’s swift exposure of the virus and its genome stands as a sign that the State knew it messed up, and that letting this carry on would be completely reprehensible on the world stage. China is very likely trying to save face, and she has many reasons to do so. That dovetails into a topic all its own, of course, which we may look at in another news piece if someone else hasn’t already done an adequate job dealing with it.

How is the world being affected?

Rather than go to gleaning other news sources, I decided to make use of the wide number of contacts I have in the world to ask them to talk about what is happening locally. My respondents were very good to tell me their own personal experiences as well as send photos of interesting situations as they related to the virus. Here is what we can show you. The names of my witnesses will be rendered as anagram initials, simply for their protection. However, if any of them wish to be recognized by name in this news piece, they will contact me and ask, and I will reveal their names. It just seemed helpful to everyone’s privacy to do it this way.

Walsenburg, Colorado [I.H.] reports that nothing new is physically visible in this lightly populated area of southern Colorado. However, I.H. reports that emails are in circulation describing COVID-19, what it is, and how to help prevent it via hand washing and other known procedures.

Central New Mexico [A.P.L.] Also nothing seen or heard that is out of the ordinary. Online there are reports from correspondent Michael Yon saying to go buy facemarks and stock up, but also, APL notes that the US government is saying that the masks are not needed and that there is nothing to worry about.

I noted a disconnect in this regard too, when Mr. Azar was on with Chris Wallace and Mr. Wallace asked about the utilization of the War Powers Act and what it might have factories in the US make. Sec. Azar mentioned that they would make masks. But in a comment earlier or later, Secretary Azar noted that masks are not needed, and that they are not necessarily helpful; possibly even harmful. The contradiction may be out of context, for medical professionals would need masks, but it caught my attention that there was not a distinction clearly made between when masks are helpful and when they are not helpful. See for yourself:

Braunschweig, Germany [KOD] This witness reports that it is impossible to find antiseptics and soap in Hanover as well as Braunschweig. Some food shelters are sold out and are presently empty. People are reportedly buying ad stocking toilet paper, canned goods, and pasta.

Lewis Center, Ohio [PFE] This witness personally sees nothing but nervousness and people starting to “prep”. The witness’ spouse went to our local Meijer and Costco this weekend and sent me pictures like this: 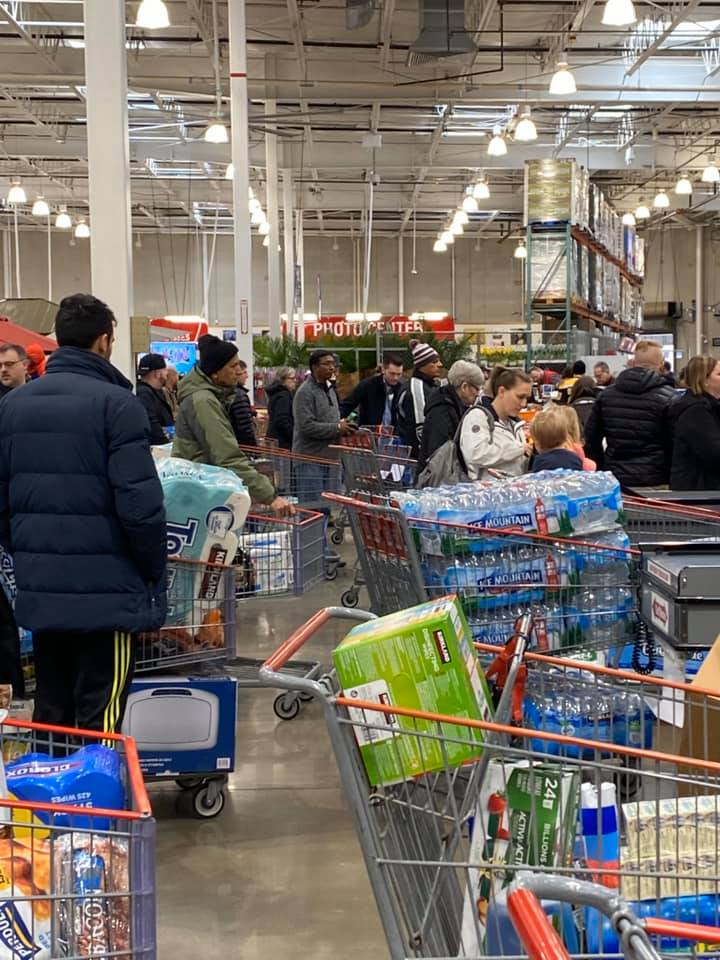 Northern New Jersey [JJS] This witness reports people buying hand sanitizer by the grocery cart load. But at a local Walgreens (a very major American drugstore chain), one of the clerks reported selling but three masks.

At the same time as we see this, we also see psychological indications that the weekend of updates from the American government seem to be helping. The Dow Jones Industrial Average closed a few minutes ago at the time of this writing, up over 1,200 points, the largest single-day point rise in history. Apple, one of America’s most significant companies with factories in China, reported a share price jump of US$25.45, a 9.81% increase in one day, after the company shed about twice that in value from its recent highs.

The investment markets are notorious for overselling and overbuying, so tomorrow’s market is likely to show a significant drop, unless there are continuing positive signs that the crisis appears to be fading worldwide, even as the virus has not made its full run. We can only wait and watch.

Stay tuned for further updates from us at The Duran as we chronicle this story.

This is pure fear porn. Do you know how many hundreds of thousands of people die every winter from pneumonia? The majority of people who succumb to an infection of any sort tend to have weak immune systems due to many factors such as poor diet, smoking, prescribed medication, etc. China is a blueprint for the world. Governments are slavering at the idea of limiting assembies of people to low numbers: think how Macron is rubbing his hands at the idea of getting rid of the gilets jaunes. Don’t imagine that when this nonsense is over, the “emergency” measures are… Read more »

depending on source the survival rate is over 50% with a confirmed mortality world wide of less than 1%. There’s still a ways to go, but so far it could be a lot worse.

The confirmed mortality rate is NOT 1%. It depends on the quickness of response and the resources available. See: https://medium.com/@tomaspueyo/coronavirus-act-today-or-people-will-die-f4d3d9cd99ca

To some extent, this suspicion appears to have been justified, as one of the main doctors who warned his own government about the danger of this virus just died from it.

Bullshit. If the author cannot even check simple sources, why should we be believe anything else?

Dr. Li was a very sharp doctor who noticed a possible problem but not an oppressed whistle blower.

The chickens are coming home to roost.

Here is good information about the rate of spread and the rate of death from COVOD19:mhttps://medium.com/@tomaspueyo/coronavirus-act-today-or-people-will-die-f4d3d9cd99ca