The intricate role played by Saudi Arabia and the United States in ushering in a proxy terrorist war on Syria, have been both explicitly and implicitly known, since virtually the beginning of the US instigated proxy conflict in Syria, which was inaugurated in 2011.

In many ways, 2013 represented the nadir of the Syrian conflict. It was a time when it looked as though the combined strength of terrorist groups including ISIS/Daesh, FSA and al-Qaeda might succeed in destroying the secular, tolerant, pluralist Syrian Arab Republic and realise their goal of creating a Takfiri state based on extremist religious supremacist ideology and racism.

With Syria on the verge of a full victory and with Russia confirming that ISIS now controls less than 5% of Syrian territory, 2013 seems like a very distant time in the context of the Syrian conflict.

But on the 18th of March, 2013, large scale coordinated rocket attacks on Damascus International Airport, the Syrian Presidential Palace and other vital security targets in the capital, were conducted by the Takfiri terrorist group FSA.

The exiled American whistleblower who once worked for the notorious NSA, Edward Snowden has released the following short top secret document which plainly details how the US and a powerful member of the Saudi regime, helped to fund and organise the illegal attack on Syria. 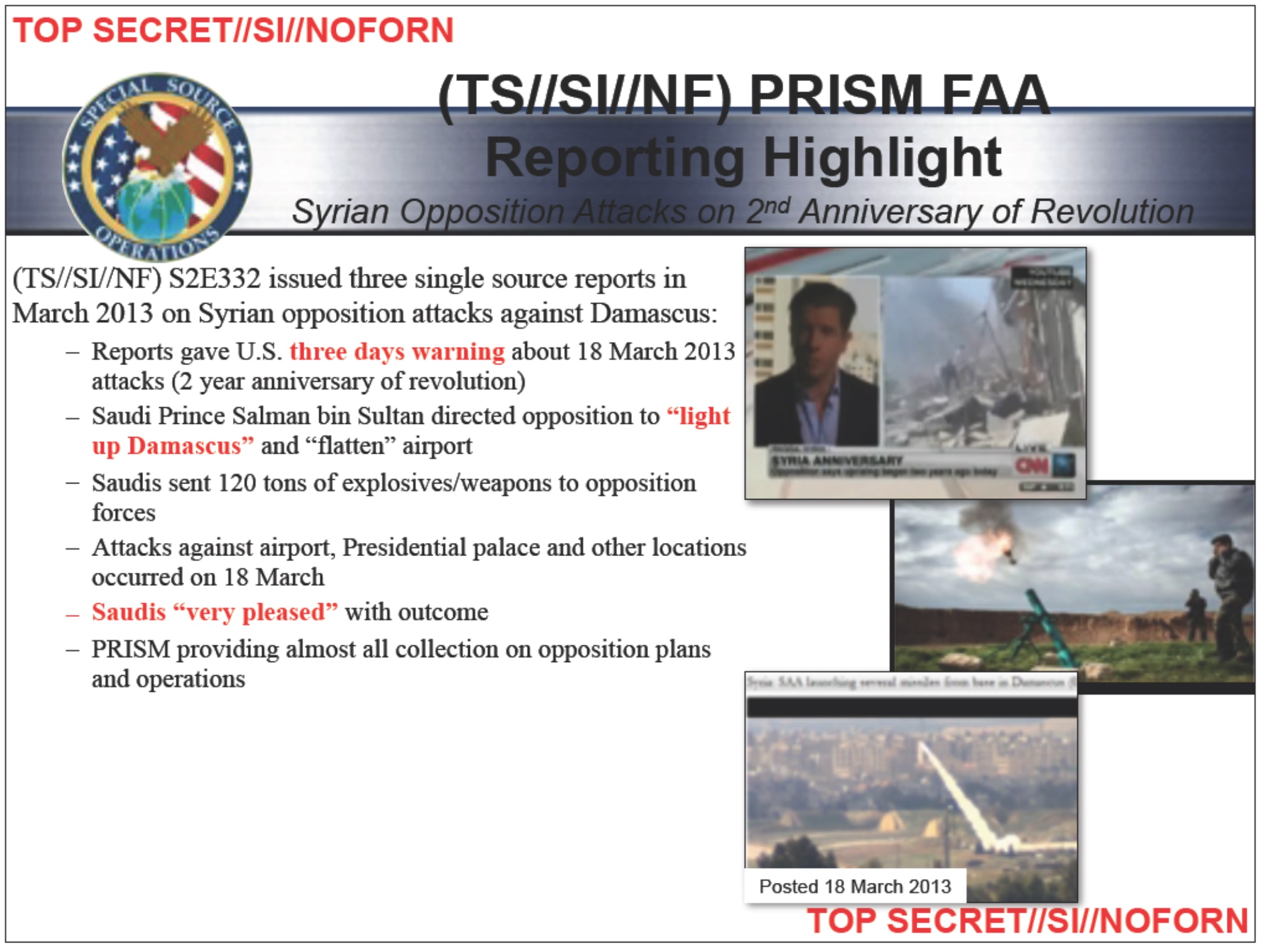 The text of the document reads as follows:

The collusion between Saudi and the US in a deadly terrorist attack constitutes nothing less than a war crime.

Because of the patently biased nature of the International Criminal Court, it is unlikely that anyone from the US or Saudi will be prosecuted for this war crime.

However, Snowden’s document does help to explain Syria’s unity in the face of a campaign of foreign state sponsored organised terrorism. Contrary to what many al-Qaeda apologists say, the Syrian conflict was a proxy war from day one. Of course, foreign powers used the promise of enhanced material status to woo a small number of disgruntled locals, but the main sources of terrorist fighters and virtually all of the funding and arms came from abroad.

While Syria faced onslaughts funded and directed by some of the wealthiest and most powerful states in the world including, the USA, Saudi Arabia, Qatar, Israel, Turkey, UK, France, Belgium, Germany, Netherlands and others, Syria managed to retain her sovereignty, even prior to Russia’s game-changing legal intervention in 2015.

The anti-Syrian alliance did its utmost to destroy one of the last truly revolutionary Arab Republics in the world. The fact that of all their efforts ultimately failed, is a testament both to the resolve of the Syrian Arab Republic and to the powerful anti-terrorist alliance that Damascus built throughout the conflict, one which has been capable of resisting imperialist obscurantist aggression from the west and its Middle East proxies and allies.