Divers have been investigating the damaged USS John McCain which sustained heavy damage when it crashed into an oil tanker near Singapore.

Ten sailors are officially ‘missing’ from the incident and are now feared to be dead. Rescue divers have confirmed they have found dead bodies in the part of the ship near the impact zone as well as in the waters nearby.

According to US Admiral Scott Swift,

“The divers were able to locate some remains in those sealed compartments during the search today. Additionally, the Malaysian navy has reported that they have located potential remains”.

The deaths are thought to be either a result of the collision itself or drowning when part of the vessel flooded due to the large hole in the side of the ship.

This is the third US ship to be involved in a major collision in Asian waters in  three months. On 17 June the USS Fitzgerald destroyer collided with a container ship from Philippines off the coast of Japan, an incident which killed seven men, while in May of this year the USS Lake Champlain crashed into a South Korean fishing boat.

Hope they don’t have a go at the tanker captain.

Mike from Ramsbottom
Reply to  colum

Now, I have a vivid imagination. The scenario I envisage is based on the analysis of this collision which I have read, but didn’t save the link to. The analysis was that as the damage to the warship was at the stern from the waterline up, and as the damage to the tanker is reported to be twenty feet above the waterline, then it seems that the warship steamed across the tanker’s bow. In my imagination I hear the tanker’s pilot blowing his horn long and loud whilst the destroyer steamed serenely on…

AM Hants
Reply to  Mike from Ramsbottom 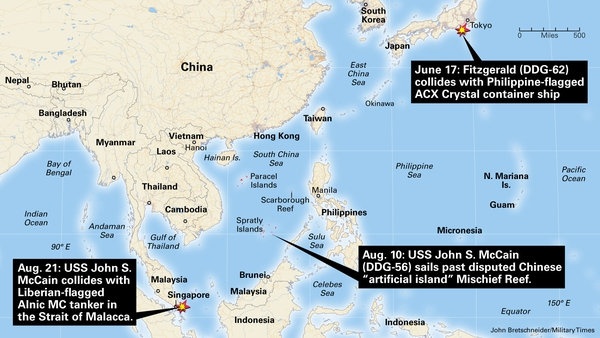 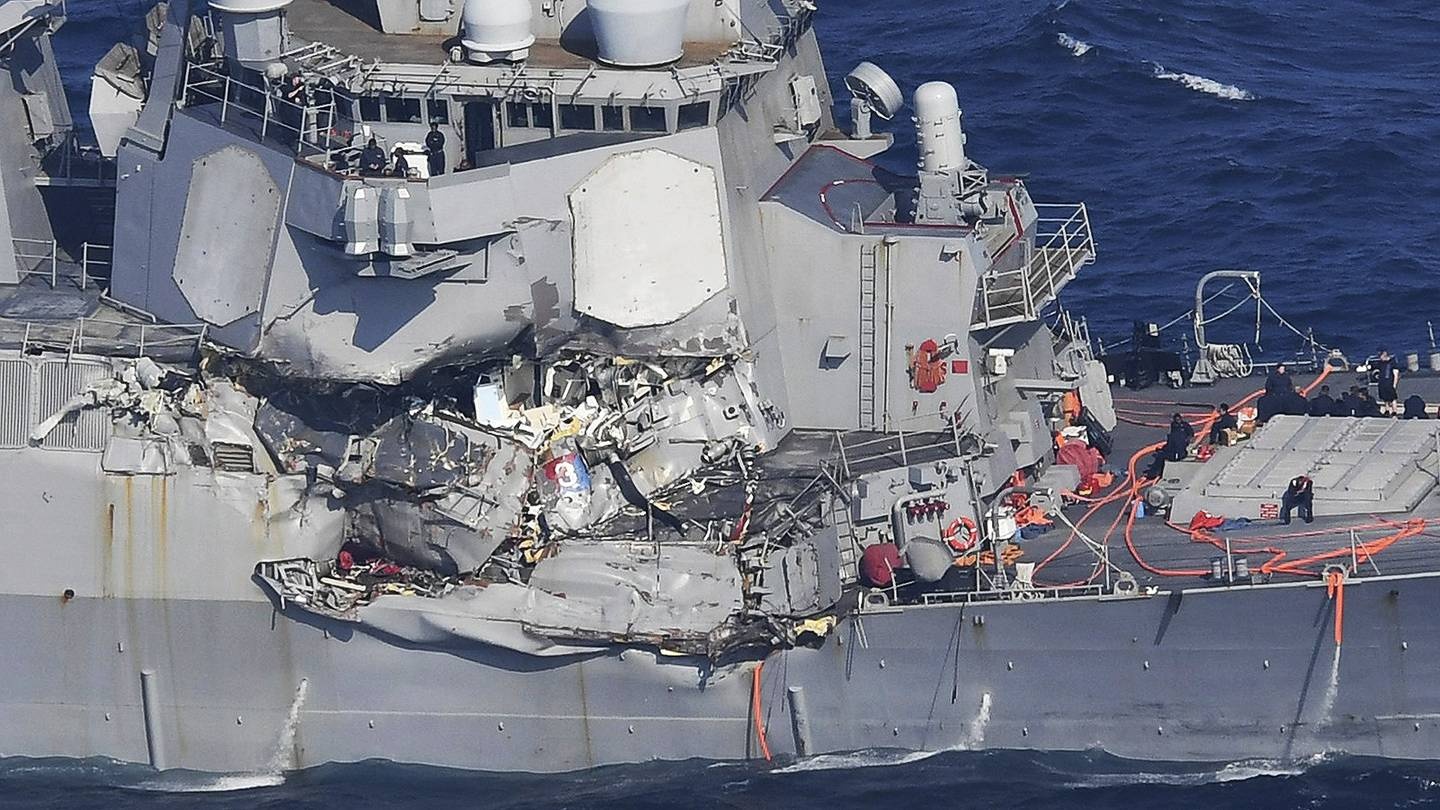 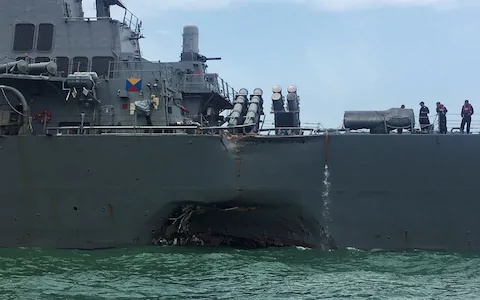 That hole can only have been caused by the underwater bow protrusion that virtually every ship is fitted with, to enable it to slice through the water more efficiently. Must have been terrifying to have been sleeping down below on the US ship, when that thing came through the wall. And the doors to the compartment would have been immediately slammed shut by those outside, to prevent the boat from sinking; never mind the screams of pain coming from the wounded. Very traumatic for those who were obliged to do their duty in that regard. Manslaughter charges need to be… Read more »

Whatever anybody may think, the sailors signed up to serve there nation, not realising that their leaders would be using them as oil/gas and bankers security agents. RIP. Does anybody find it strange, what the Aegis destroyer was doing in the area? Doesn’t China run it’s Myanmar-China fuel pipeline from the area? Who wants that shut down? Then you have Trump, wanting to keep his Forces in Afghanistan. Now is that for the poppy harvest and the benefits that come from the market? Bearing in mind that the only success that NATO has had in Afghanistan is the poppy harvest?… Read more »

Mike from Ramsbottom
Reply to  AM Hants

That’s a very credible analysis, AM, and since we read stories of heroin being shipped back to the US in the body bags of dead soldiers, then they are, as it were, going to need a lot more dead soldiers….

AM Hants
Reply to  Mike from Ramsbottom

I was just rambling away, but, asking a lot of questions, as I have no idea what is what. With regards shipping heroin back, sadly you can believe it. Why do we elect our leaders and if we knew exactly what they were capable of, just to line their pockets, or keep their dirty habits secret, would we still vote for them?

Mariaaburr
Reply to  AM Hants

CumExApostolatus
Reply to  Mike from Ramsbottom

The bodies of dead soldiers have been used to ship illegal drugs since at LEAST the Vietnam years.

charlie
Reply to  AM Hants

You are wrong …they died because they are in some one elses territory illegally…….Bloody war criminals …America Terrorist No.1

AM Hants
Reply to  charlie

Were they in International Water? At the end of the day, who gave orders to the young kids on board the ship? So why are they not held to account, meaning the leaders? At the end of the day families are grieving for their loved ones and as stated, I am not in the mood to pick on some young kids, that signed up to serve their nation. When the leaders that we elect use them as cannon fodder and are never held to account.

Simon
Reply to  AM Hants

AM. But why should we offer sympathy to the US sailors? After two decades of clearly illegitimate warmongering, illegal invasions and mass murder of millions of innocents – then anyone who has chosen to ‘serve’ in that particular organisation is nothing more than a hired killer. The US Military is not about protecting the USA.

They are not much better or more worthy of our respect than Al-Nusra/ISIS mercenaries. Those young men are economically disadvantaged, poorly educated and propagandised too. But most people are glad to see THEM die.

AM Hants
Reply to  Simon

I am happy to rejoice at ISIS being taken out, because they are not open about who they are. Those that sign up to serve their nations, and prepared to give their lives to their nations, I respect. However, I do not respect those that treat them as Cannon Fodder. The same as those that end up as mercenaries. I have no respect for them, as they are doing it for personal gain, whatever nation. Ukraine, I happily enjoy and celebrate when the Nazis are taken out, but, I feel compassion when it is the conscripts, especially if they are… Read more »

They were in an International Seaway, but that close to land, they were probably in Malaysia’s territorial waters.

Le Ruscino
Reply to  AM Hants

Just say that maybe North Korea or another State could hack the Bridge of any Merchant Vessel navigation system & ram any Naval Vessel & US was being taught a public lesson ? This lesson has 3 effects: 1. US Naval Power is a Joke & the Emperor has No Clothes ! This is a repeat from the 60 missile attack on an undefended air-base in Syria ………(59)……… 2. In any conflict ALL Merchant Vessels are strategic tools (impossible to make their Nav Systems unhackable in the next 20 years) 3. With the US Dollar backed in truth ONLY by… Read more »

Yessss.. But why should ‘hacking the bridge’ or disrupting the electronics have stopped them from looking where they’re going? This was a US Navy ship.. No expenses spared. And they were sailing through very, very busy sea lanes. And (never start a sentence with ‘and’ I was taught) – a naval destroyer is a lot faster than the oil tankers, container ships and fishing vessels which ply these waters for a living. Would it not be sensible to post four lookouts – people with eyes and voices – prow, stern and amidships both sides, each lookout post to be equipped… Read more »

But as any Sailor will tell you – A ship is not a car & they all turn & slow down at a snail’s pace – a fast ship does 40 Nautical Miles an hour & most less, a lot less. Stopping & turning can takes many hundreds of metres. Setting a collision course at 12 Knots can with a modicum of deviousness catch any of these warships!

It’s likely that the partly-loaded tanker would only be able to manage around 15 knots max – after a few hours at full power. The McCain would be capable of, at least, twice that speed and be able to vary its speed very quickly – but, more importantly, it could turn 90 degrees inside 10 seconds. Ten seconds from impact, even at full speed, the tanker (operated by the aptly-named Stealth Maritime Services) was only one ship’s length away. The relative speed/manoeuvrability of the two is roughly equal to a bear trying to chase down a hare – not very… Read more »

According to the US Navy, after deliberately aggravating the Chinese with yet another ‘Freedom of Navigation’ pass by their new base, the McCain was hit while the ship was “transiting to a routine port visit in Singapore.”

Wasn’t the other accident a bit suspicious as well? Funny, they both got hit in the same place? I wonder how their communications system fared?

The Fitzgerald was very different, in that it was hit on the starboard side – the presumption is then that it was the US vessel at fault, even though the freighter was manoeuvring erratically, possibly due to its autopilot trying to unwind a previous confliction-avoidance course reversal. (The investigation is still under way, but it’s significant that the destroyer’s commanders have been disciplined.) As below; the question must still remain as to how a slow civilian ship could ever manage to ram anything as fast-reacting as a destroyer – the “Greyhounds of the Sea” – if it was under competent… Read more »

So the primary possibility is arrogance on the High Seas and aggressive manouvres. Not from the old war horses of the seas, but, the whipper snapper new comers?

Too early to say; but, even though it was the tanker’s responsibility to give way in that situation, the ability to manoeuvre evasively to easily avoid a collision was available to the McCain – and yet apparently unused?

Whether a hubristic ‘It’s my right-of-way – I’m holding my course – he’ll have to yield’ came into it will be one thing the inquiry may seek to discover..?

If it is arrogance and ignorance that caused it, how, will they spin that to the families and loved ones, of the kids lost their lives?

Fortunately, all militaries have hundreds of years of experience in concocting obfuscating deathagrams.

It’s a sad fact that a high percentage of service losses are immoral, utterly pointless and completely avoidable – which does not minimize their relatives grief, or the courage of those lost.

Nevermind maybe they will find the Bin Laden Fake dummy down there…..Good to see the enemy losing its troops…LOL

looks a bit flimsy for a warship!

It would appear that in addition to the usefulness of Russia performing combat testing of her Aerospace forces and associated missiles and equipment, with 2 US MQ-1 predator drones crashing near Syrian borders and 3 US Navy vessels (including missile-destroyers) colliding in the Asia-pacific I am starting to suspect that Russian electronic warfare capabilities have also been dusted off for testing.

Rest in peaces, like countless of war criminal comrades in the years to come. Who in their right mind would board a ship called “John McCain” anyway.