China is getting extremely fed up with Donald Trump’s continual public assertions that North Korea is somehow China’s problem as though North Korea is a kind of geo-political prodigal son rather than a sovereign nation that behaves in manner that is incredibly independent of just about every nation on earth, including China.

Today, China’s Ministry of Foreign Affairs Spokesman Geng Shuang blasted the America insinuations about North Korea being China’s responsibility. Although he did not name the United States or Donald Trump, the meaning was unambiguous.

“Recently, certain people, talking about the Korean Peninsula nuclear issue, have been exaggerating and giving prominence to the so-called ‘China responsibility theory’.

I think this either shows lack of a full, correct knowledge of the issue, or there are ulterior motives for it, trying to shift responsibility.

Asking others to do work, but doing nothing themselves is not OK! Being stabbed in the back is really not OK!

The ‘China responsibility theory’ on the peninsula nuclear issue can stop”.

China has recently affirmed that it is in full compliance with UN sanctions against Pyongyang after US Ambassador to the UN Nikki Haley implied otherwise.

Patronising and condescending Tweet’s from Donald Trump have sought to push the burden of responsibility for America’s irritation with North Korea onto China, something that is not only unrealistic but insulting to China.

Trade between China and North Korea grew almost 40% in the first quarter. So much for China working with us – but we had to give it a try!

As The Duran reported earlier this week, the United States continues to insult China both by mistake and by design.

“The Trump administration and Donald Trump personally seem hell-bent on insulting China both by intentional deeds and accidental failures in protocol.

While China’s week began with the Presidents of China and Russia as well as important business leaders signing a large series of bilateral deals, it also started with US Ambassador to the UN NIkki Haley totally disregarding China’s positions over North Korea which was shortly followed by two separate violations of Chinese territorial rights, first in the waters of the South China Sea and then in the air space overhead.

Making things worse, whereas Donald Trump had scheduled bilateral meetings both at the G20 and beyond with the leaders of Russia, Poland, South Korea, Japan, Britain and others, the way Trump spoke about his meeting with Chinese President Xi Jinping was as if meeting with the leader of a superpower which has more issues with America than Russia (both positive and negative ones), was an afterthought, as though it was a happenstance meeting on the way to the airport.

Leaving Hamburg for Washington, D.C. and the WH. Just left China’s President Xi where we had an excellent meeting on trade & North Korea.

To make matters worse, the official US account of the discussions lacked an English translation of President Xi’s statements and most insulting of all to China, the US on an official document referred to China as “The Republic of China” rather than the correct full name of The People’s Republic of China. Far from just being an insignificant oversight, the Republic of China is the technical term for Chinese Taipei, often called Taiwan. 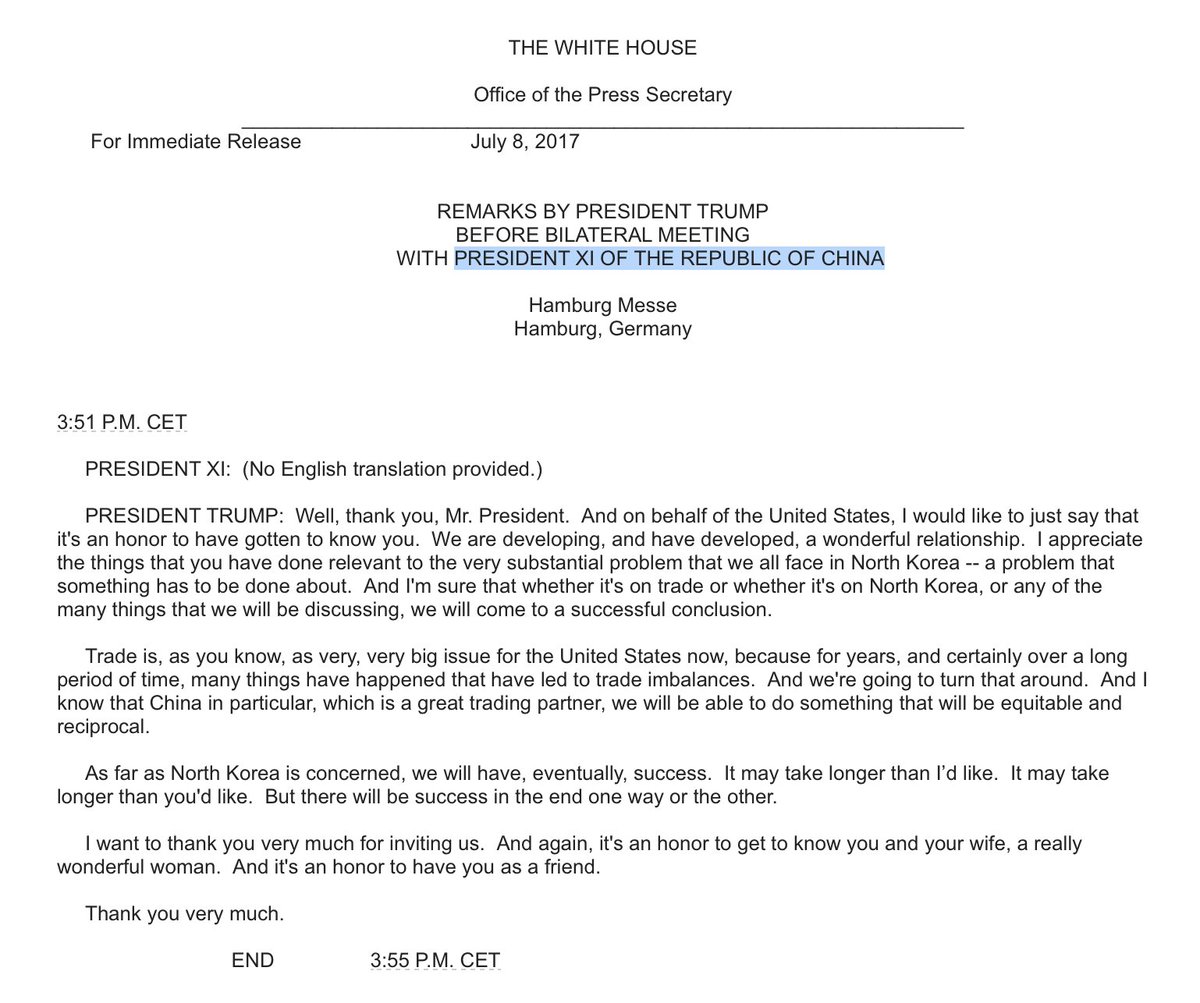 Had the US called the Russian Federation The Soviet Union or Russian Empire it would have been a far less important mistake for two reasons. First of all, The Russian Federation is the contiguous successor state to both the Russian Empire and Soviet Union and secondly, Russia has got so used to countries like the United States misrepresenting Russian history and Russia’s present realities, that Russian diplomats have resigned themselves to staying focused on the results rather than the process by which the results might be achieved.

For China, protocol is deeply important and referring to China by the self-styled name of a disputed province is deeply insulting.

Trump still doesn’t seem to fathom that bombing Syria while serving chocolate cake to the Chinese President was an insult. The America side also fails to realise that the fact that Mar-A-Lago was not big enough to house the Chinese delegation, forcing them to rent out a nearby hotel was also a gross oversight.

One could argue with some merit that Russia should be more public about private thoughts when countries like the United States insult Russia. This is a separate point and one worthy of discussion. However, the fact remains that China is publicly insulted by the United States when it refuses to treat its officials with dignity, refuses to acknowledge protocol and refuses to get very basic facts correct”.

READ MORE: The Trump administration continues to insult China–both by mistake and by design