Arabic media initially reported that on the 2nd of December, forces loyal to Saleh were in control of most of Sana’a, but by early morning on the 3rd, Houthis claimed to have reversed their losses due to a new military push by Houthi fighters and defectors from Saleh’s forces who had decided to remain loyal to the Houhi’s.

The united state which was shaky from the beginning was torn apart in 1994 during the first of many civil conflicts in post-1990 Yemen. During that war, Southern born Abdrabbuh Mansur Hadi sided not with southern rebels but with the Saleh government in Sana’a. Saudi Arabia notably broke with the United States to side with the leftist rebels of the South.

Ultimately, the Southern forces lost and Yemen became reunited. Hadi who had risen to the rank of Defence Minister during the conflict, was rewarded for his loyalty with the appointment of Vice President of Yemen.

Stability in Yemen however, was always tenuous due to the competing interests of various factions and individuals. 1994 saw the formation of a new opposition group, rallying around their leader Hussein Badreddin al-Houthi. After Hussein’s death in 2004, the group’s leadership fell to Abdul-Malik Badreddin al-Houthi. The Houthi movement officially known as Ansar Allah (Supporters of God), continued to make demands on the central government for a fairer distribution of wealth, less corruption and a more democratic representation for follows of Zaidi of Fiver Shi’a Islam. Zaidi Shias make up around 40% of Yemen’s population with most of the rest of Yemenis being Sunni. The Christian population of the country is comparatively negligible.

At the same time, after 2007, a group in southern Yemen called the Southern Movement formed. This group agitates for the re-creation of Southern Yemen and is made up of a combination of pan-Arabist socialists, hard-line Marxist-Leninist who seek to restore the Soviet model of their former state and also some Takfiri/Salafist elements. The movement in this sense while influential to a degree, is also far from a coherent political/ideological unit.

In 2011, mass protests formed against President Saleh. As the poorest country in the Arab world, a diverse set of forces mobilised against Saleh accusing him of economic deprivation of the country, corruption and incompetence. Among participating groups in the protest were the Houthi movement and the Southern Movement. Other forces included al-Qaeda terrorists. ISIS formed syndicates in Yemen in subsequent years. Ultimately, the Houthis did not participate in the Gulf Cooperation Council (GCC) brokered settlement.

In 2012, Saleh stepped down and was replaced by Vice President Hadi and his term was later extended by a GCC brokered accord.

Although the Houthis tentatively supported the changes in 2011, the subsequent reforms did not meet the expectation of the Houthi movement. In particularly, Houthis resented an attempt to create new federal units in the country.

Consequently in 2015, Houthis stormed the Presidential palace, ultimately forcing Hadi to flee. Since then Saleh, whom the Houthis once protested against, has become a supporter of the Houthi rebellion. Saleh was initially highly important to the Houthis. As the longest severing President of the Republic of Yemen (united Yemen), he instantly lent credibility to an otherwise localised movement. As a long serving former President who had conversations with leaders ranging from Bill Clinton to Vladimir Putin, Saleh was somewhat necessary to the Houthis in order to be taken seriously on an international level, not least because Yemen is often the ‘ignored country’ in an Arab world that for decades has been watched closely by major international powers.

At the same time, Hadi fled to the former Southern capital of Aden where he allied with a combination of Southern Movement leftists, Takfiri groups and ultimately with the GCC coalition led by Saudi Arabia and the UAE (Qatar quit the coalition in 2017 and has subsequently criticised Saudi Arabia on state owned media outlets).

In recent months, following a trend of the last year or so, Saleh has become increasingly dispensable to the Houthis. As a political leader Abdul-Malik Badreddin al-Houthi has proved himself to be not only capable but inspiring, while Saleh has been exposed as something of an opportunist, simply trying to align himself with that he felt was the winning side so that he could act as President of the country he formally ruled between 1990 and 2012.

Now though, it would appear that Saleh has switched sides after doing a deal with the Saudis. While the details or even the existence of the deal cannot be fully confirmed. Saleh recently appeared on television urging for a truce with what he called “our Saudi brothers”.

The rise of Crown Prince Muhammad bin Salman (MBS) in Saudi Arabia, has seen him eager to end the war in Yemen which he fuelled as Saudi Arabia’s Defence Minister. The war has been uniformly disastrous from all perspectives. Saudi Arabia’s indiscriminate bombings have caused a humanitarian crisis, the likes of which have not been seen in the 21st century. The Saudi led blockade of Houthi controlled Yemen has caused a Cholera outbreak, mass starvation and untold deaths, especially among children.

From the Saudi perspective, Riyadh and MBS in particular faces the embarrassing situation of not being able to subdue a Houthi fighting force whose weapons are technically no match for Saudi Arabia’s ultra-modern US made jets and missiles.

In order to justify this embarrassment, Saudi media regularly claims that Houthis are being armed by Iran or even more absurdly by Lebanon’s Hezbollah. However, this is logistically impossible as Iran would have to either airlift weapons to Yemen or else break the Saudi naval blockade and this simply hasn’t happened. Hezbollah of course, has neither an air force nor a navy. Others have claimed that Houthis are being supplied via arms dealers working in Oman. This claim is vehemently denied by the Omani authorities and because there is no credible evidence of Houthis being armed via Oman, this would appear to be another Saudi lie designed to excuse their military incompetence.

The inevitable Houthi falling out with Saleh has come at a time with Houthis have exploited political instability in Saudi Arabia with more frequent missile attacks. The missiles used are medium to short range ballistics that Houthis have seized from Yemeni military bases. They are far cruder than modern Iranian operated weapons, but still occasionally land hits on Saudi territory in spite of Saudi’s advanced US anti-missile defence systems. The accuracy of such missiles is still not entirely clear as frequently, Houthis claim to have struck Saudi targets, while the Saudis typically claim they intercepted the missiles. In the fog of a war which few reporters have access to, it is anyone’s guess who is being more honest in this respect, although on many occasions, Houthis do post videos which appear to confirm their narrative of success against the richest country in the Arab world.

Saleh’s defecting to the Saudi side appears to be engineered by Riyadh and agreed upon by Saleh who was almost certainly offered a large cash incentive to turn on the Houthis. While in public, Saudi Arabia is now claiming to welcome a truce offered by Saleh, in reality, a personal deal between Saleh and Riaydh is the far more likely expiation before Saleh’s offer.

Subsequent to this development, Houthi online social media outlets have been quick to discredit Saleh. Claiming to have taken Saleh’s compound in Sana’a, they released a photograph showing a table filled with luxury alcoholic drinks, something which would infuriate the pious followers of Abdul-Malik Badreddin al-Houthi. 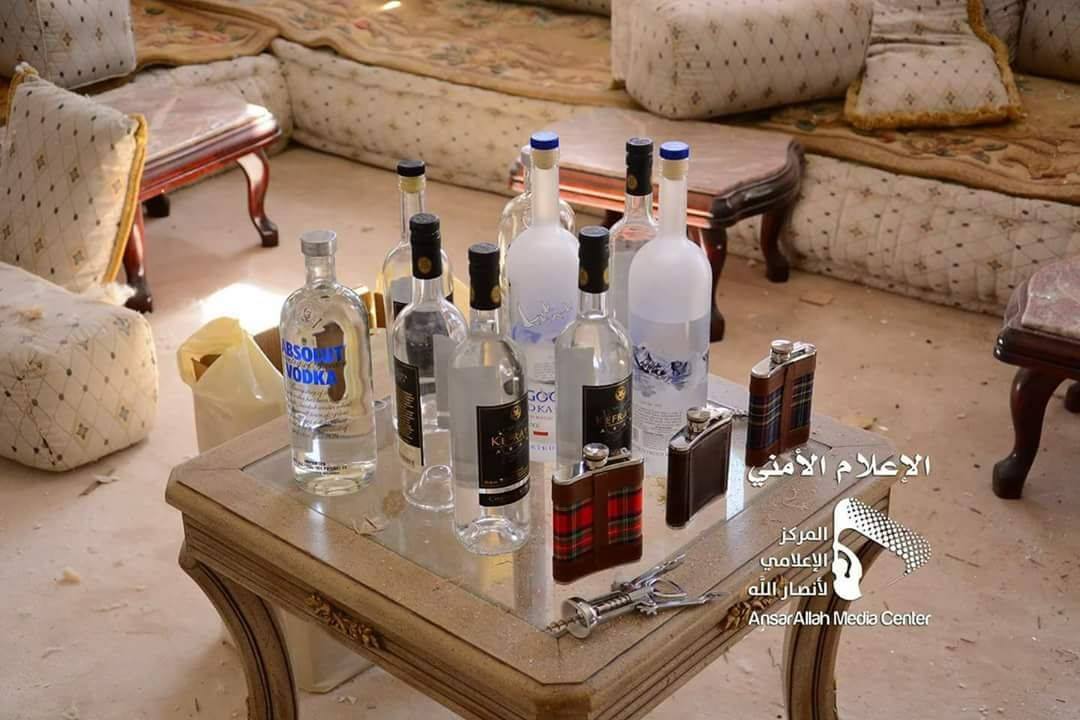 This all leads one to conclude that where the Yemeni conflict once was between factions loyal to one of two Yemeni Presidents (Saleh and Hadi), now the conflict is officially one where the Houthis are fighting everyone else, including Hadi’s forces, Saleh’s forces who have turned on the Houthis and more importantly, the military of Saudi Arabia.

The Houthi star among the wider Islamic Resistance has grown due to their ability to see off a vastly more powerful Saudi led onslaught ever since 2015.

If the Houthis are able to continue holding off Saudi Arabia, even without Saleh on their side, the embarrassment for Saudi Arabia will be all the more apparent. The Houthis do not need to “win”, they simply need Saudi to lose, in order to claim a meaningful victory. The Saudis on the other hand, need to take Sana’a in order to justify their aggressive war to their own side which is experiencing an onset of war fatigue.