We have a feeling that the Harvey Weinstein sexual assault scandal, and hollywood’s decades long cover up, will bring down many stars.

Russell Crowe and Matt Damon have already been connected to the Weinstein scandal, and now ‘Good Will Hunting’ co-star (a film Weinstein produced) Ben Affleck is trying to avoid fallout from his Harvey’s troubles.

According to x17online, Affleck visited a LA Buddhist rehab, when he was approached about his embattled friend Harvey Weinstein. Affleck remained silent when the camera man asked Ben if he thought Weinstein was a sick individual.

But Affleck is not out of the woods with the sexual assault hurricane sweeping up hollywood. Affleck is now being accused of groping former TRL host Hilarie Burton’s breasts.

When a fan tweeted that Affleck might as well have “kept quiet,” another Twitter user wrote: “He also grabbed Hilarie Burton’s breasts on TRL once. Everyone forgot though.”

Burton, who starred in the show One Tree Hill, quickly jumped into the thread, confirming that she recalled the incident.

Hilarie then wrote: “I was a kid.”

It gets worse for Ben. Affleck’s former co-star Rose McGowan told Ben to “F*ck off!” on Twitter and accused him of knowing about Weinstein’s abuse for years.

It’s not clear which press conference McGowan was referring to, but both she (left) and Affleck (center) appeared in the 1998 horror movie Phantoms (pictured), produced by Weinstein. 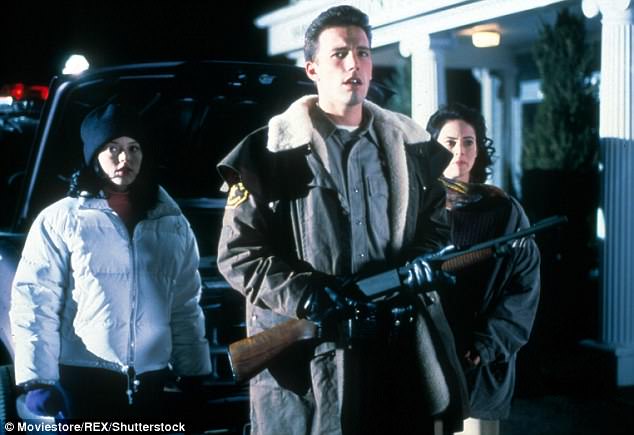 Rose McGowan slammed Ben Affleck as a liar Tuesday after he finally broke his silence over the sexual harassment and assault allegations leveled at Harvey Weinstein.

Five days after the claims broke about the producer, who backed Affleck and Matt Damon’s screenplay for Good Will Hunting, Affleck said that he was ‘saddened and angry’ over the claims.

He also said that ‘The additional allegations of assault that I read this morning made me sick,’ and that he wants to see more support for women in the media.

But McGowan, who was allegedly assaulted by Weinstein in 1997 and has been crusading against silence over Weinstein’s grim past, stuck out at his claims to obliviousness.

She tweeted: ‘@benaffleck “GODD*MNIT! I TOLD HIM TO STOP DOING THAT” you said that to my face. The press conf I was made to go to after assault. You lie.’

It’s rather a trendy and also beneficial bit of information.. Minnesota Vikings Podcast I’m thankful that you contributed this useful info with us. Be sure to stop us informed such as this. Many thanks expressing.

I see your website needs some fresh posts.
Writing manually takes a lot of time, but there is tool for this time
consuming task, search for; Wrastain’s tools for content