Just hours after The Bank of England refused to hand over $1.2 billion of Venezuela’s gold from its custody vaults (stored there after the completion of a gold-swap transcation with Deutsche Bank) to President Maduro (after heavy lobbying from US officials), The Guardian reports that a UK foreign office minister is now urging the same Bank of England to transfer the bullion to the self-proclaimed interim leader Juan Guaidó.

In a statement to British MPs, Sir Alan Duncan said the decision was a matter for the Bank and its governor, Mark Carney, and not the government. But he added:

“It is they who have to make a decision on this, but no doubt when they do so they will take into account there are now a large number of countries across the world questioning the legitimacy of Nicolás Maduro and recognising that of Juan Guaidó.”

Guaidó has already written to Theresa May asking for the funds to be sent to him.

The former chair of the foreign affairs select committee Crispin Blunt said the current Venezuelan central bank president was not legitimate, since he had not been appointed by the country’s national assembly.

Blunt has sent letters to the foreign secretary, Jeremy Hunt, and to the chancellor, Philip Hammond, urging a decision.

Notably, the reason the BoE initially gave for its initial refusal to release was due to its insistence that standard measures to prevent money-laundering be taken – “including clarification of the Venezuelan government’s intentions for the gold.”

“There are concerns that Mr. Maduro may seize the gold, which is owned by the state, and sell it for personal gain,” the newspaper said.

Separately, as we reported previously an official told Reuters that the repatriation plan has been held up for nearly two months due to difficulty in obtaining insurance for the shipment, needed to move a large gold cargo:

“They are still trying to find insurance coverage, because the costs are high,” an official told Reuters.

All of which appears to have suddenly been swept under the carpet now Guaidó has been installed. 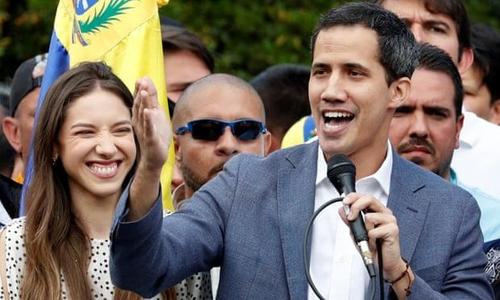 Duncan said Hunt would be discussing the next steps in the European Union’s efforts to support Guaidó in Bucharest on Thursday.

However, it’s not a done deal yet as  shadow foreign secretary, Emily Thornberry, cautioned against a rush to oust Maduro:

“Judging by its record in recent years, the Maduro government fits none of those descriptions, but I would also believe that it is a mistake in situations like this simply to think that changing the leader will automatically solve every problem, let alone the kind of US-led intervention being threatened by Donald Trump and [the US national security adviser] John Bolton.”

Nevertheless, with much of the Western world now backing Guaidó in his coup, it seems the gold bullion will be winging its way to The Assembly’s coffers very soon.

If this gold is sent, it will no doubt be placed in US hands “temporarily , and for safe keeping”.
As for other points , it appears the West now does not only refuse to recognise the Maduro government, but also the country’s Supreme Court and now the country’s Central Bank. Any recent mention by the West of supporting Venezuela’s sovereignty?

the country’s Supreme Court??? Its a big joke of Maduro’s friend! They even broke apart the legitimately elected National Assembly. Imagine the US supreme court declaring the lower chamber shut down? Now imagine the same in your country. The guy is a dictator and everyone knows it. But I agree that Russia and China should get their loans reimbursed.

Get your facts straight. The Venezuelan Supreme court deemed that 3 districts in the general election for the national assembly had to have a revote due to irregularities. The National Assembly refused – thus forcing the Supreme Court to disband the assembly. Analogue would be kongress refusing to comply with a US Supreme Court ruling. National assembly overplayed their hand and acted unconstitutionally.

The young fellow – he’s just 35 – is just a puppet, not a dictator. He does what he’s told. Trump wants that gold, and the UK concurs, so the little chappie asks for it.

TELESUR reports that the Prosecutor of Venezuela has initiated a preliminary investigation against opposition activist Guaidó for his responsibility in the events that “have damaged the peace of the Republic, the economy and the national patrimony.”

He is implicated in the violent protests resulting in death, as well as in coercive measures carried out by the United States (US) against Venezuela, the prosecutor explained. All of these occurred during January of this year.

The Prosecutor of Venezuela asks for precautionary measures against Guaido: prohibition of leaving the country, freezing of his accounts, seizure of his possessions in the country.

Meanwhile the Russian State News Channel “Rossija 1” also reports that a court in Venezuela has banned opposition leader Juan Guaido from traveling outside the republic and decided to block access to his bank accounts. Warrants for his detention do not yet exist. And Russia’s “Ruptly” reports the same: “Venezuela’s Supreme Court banned opposition leader Juan Guaido from leaving the country and froze his bank accounts at a session in Caracas on Tuesday. The head of the National Assembly is “prohibited from leaving the country without authorisation” until an investigation is completed, court president Maikel Moreno said. The Supreme Court,… Read more »

You can call me AL
Reply to  rmm

Put a picture of him, next to Macron and Trudeau; any similarities ?. This latest coup is about the oil, saving the petro$, the buying out (for peanuts) or the taking of PVDSA, stopping the growing Venezuelan relationship with Russia and China, in debiting Venezuela to take out IMF loans – then it is another puppet government in the horror bag of the US. It is shocking and against all International laws.

Olivia Kroth
Reply to  You can call me AL

About 20 tons of gold from Venezuela’s central bank was ready to be hauled away Tuesday on a Russian airline’s Boeing 777 that landed in Caracas a day earlier, a Venezuelan lawmaker wrote on Twitter.

Noticias Venezuela, a news outlet in the country, posted a photo of what it identified as a Nordwind Airlines plane from Moscow that made the trip with two crews aboard.

You can call me AL
Reply to  Olivia Kroth

Thanks for the news. Surprisingly, I am split on this, until I have proof of reasons. If this is gold for financial / military / economic support, Russia would drop in my ratings, if this was protection of their own gold, Russia would still stay at 100, but I’ll chick in a star.

Olivia Kroth
Reply to  You can call me AL

We’ll probably never know why the gold was transported from Venezuela to Russia. It will remain a well-guarded state secret.

Under President Hugo Chavez all of Venezuela’s gold was retrieved from London back home. The news media reported about it at length.

I wonder why his successor, President Nicolas Maduro of Venezuela, gave his country’s gold to the treacherous Bank of England again? That was not very clever or cautious. Now he will have trouble getting it back, as the British are well-known thieves. They have a long history of exploiting colonial countries, and they are treating Venezuela as such.

You mean Maduro will have trouble stealing the gold for himself has he and Chavez have been doing for so long! Talk with Venezuelan people before drinking the free kool-aid served by your pro-russian media.

what is the difference between them all then ?????? Maduro is a babe compared to the roths lol JUst please have the courage to spell it out……………………. the petrodollar is toilet paper…….. get my drift ????? no more green garbage from most part of the entire world…. the ones that matter obviously. Get youself a good German car……….. before you go broke.

You can call me AL
Reply to  Anabela Antunes

Rothschild. Is that a banned word on here ?; well, let’s find out.

This is not about asking some folks here and there. Elections, according to European observers since Chavez came to power have been very clean, particularly if compared to the USA. That’s where the people choose their leaders in democracies. The rich in Venezuela who support US favorable policies appear to not have much popular support. At any rate, it is a violation of international law to steal money from a legitimate government or to intervene in overthrowing a gov’t not that has stopped the US from instigating dozens of coups and military invasions.

That’s funny – if Chavez and Maduro had stolen it (kind of hard for the latter if the former already had) then why is it with the Bank of England??

I know that Hugo Chavez did not trust the Bank of England at all. He hauled all of Venezuela’s gold back home and stored it in the vaults of Bank of Venezuela in Caracas, while he was alive.

After his death, Nicolas Maduro continued his policies. Therefore I find it astounding to read in the latest news that the Bank of England has Venezuelan gold. I thought it was all in Caracas and that Maduro kep it there.

As shown in this article, there is one key reason why Washington pays any attention to what happens in Venezuela:

While the United States is currently experiencing an oil production windfall, the high decline rates of non-conventional oil production (i.e. fracking/horizontal drilling) will ultimately result in a very significant need for additional imports of oil.

finally someone with brains………… not only the oil, gold, the Amazon etc…………. but the petrodollar being doomed. Also Marguerita is such a magnificent place for the boyes…… even the girlies are cute, not big fat sausages.

WTF is going on. Who voted him in? Usual regime change crowd. Cannot see the Bank of England handing over the gold. There again the first thing that happens during the regime change programme. the gold disappears. Just like in Ukraine, Libya and so many other nations.

This would be insane.

Questions Where is Libya’s gold? Will the Venezuela gold be transferred there too?

Yes! It will be transferred into the pockets of some rich neocons.

The Bank of England cannot hand over Venezuela’s gold to Guaido because it will be confiscated right away by the Venezuelan Government. So the gold will stay in the Bank of England vaults, where some British vultures will help themselves …

What the??? A number of Countries “questioning” the legitimacy of some other countries duly and officially elected President? Exactly what does it take to “question”? Under whose authority does “questioning” become “official” enough to override internal sovereignty of a community memeber of the UN? As far as I can see it isn’t President Maduro, as a personal individual, who has demanded the return delivery of Venezueala’s gold. It is an Official demand of the depositor of record, The Country of Venezuela! To distribute the material to anyone but the Government of Venezuela (National Bank of Venezuela NOT some private cartel… Read more »

A totally corrupt and illegal act – the Bank of England deserves to go down if it engages in such a traitorous deed.

wpDiscuz
30
0
Would love your thoughts, please comment.x
()
x
| Reply
Send this to a friend