Leland Keyser, who Ford claimed was one of five people at a party in the 1980s where she says Kavanaugh sexually assaulted her, told New York Times reporters Robin Pogrebin and Kate Kelly “I don’t have any confidence in the story.”

Keyser – who said she was pressured by Ford’s ex-FBI buddy to lie and say that she didn’t remember the party instead of saying that it never happened – originally said through her attorney that she “does not refute Dr. Ford’s account,” however “the simple and unchangeable truth is that she is unable to corroborate it because she has no recollection of the incident in question.”

“I was told behind the scenes that certain things could spread about me if I didn’t comply,” Keyser told the Times journos – who felt it wasn’t notable enough for their smear article.

Now, Keyser says she doesn’t believe Ford’s story at all.

“We spoke multiple times to Keyser, who also said that she didn’t recall that get-together or others like it,” wrote Pogrebin and Kelly in their new book, The Education of Brett Kavanaugh: An Investigation (yet another item that didn’t make it into their inflammatory Times article). “In fact, she challenged Ford’s accuracy.”

“Those facts together I don’t recollect, and it just didn’t make any sense,” said Keyser. “It would be impossible for me to be the only girl at a get-together with three guys, have her leave, and then not figure out how she’s getting home,” she added.

CBS News: Christine Blasey Ford’s close HS friend (who Ford says was at the party when Kavanaugh allegedly assaulted her) said Ford’s story isn’t believable and told the FBI Ford’s allies pressured her, threatened her with a smear campaign to say otherwise pic.twitter.com/8mQyci9vjp

During Kavanaugh’s confirmation process, Ford (whose lawyer recently admitted the goal was to place an ‘asterisk’ next to Kavanaugh’s name before ‘he takes a scalpel’ top Roe v. Wade) alleged that Kavanaugh and classmate Mark Judge from the all-boys Georgetown Prep, held her down and sexually assaulted in an upstairs room of a home in suburban maryland during a party. 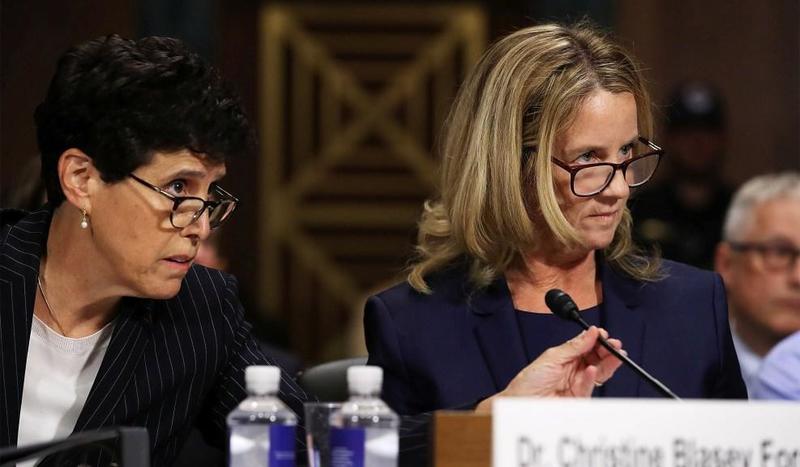 Kavanaugh and Judge have vehemently denied the incident, while a third man who Ford claimed was at the party – Patrick J. Smyth, also denied any recollection of the event, telling the Judiciary Committee in a statement last September: “I understand that I have been identified by Dr. Christine Blasey Ford as the person she remembers as ‘PJ’ who supposedly was present at the party she described in her statements to the Washington Post,” Smyth wrote in his statement. “I am issuing this statement today to make it clear to all involved that I have no knowledge of the party in question; nor do I have any knowledge of the allegations of improper conduct she has leveled against Brett Kavanaugh.”

Meanwhile, The New York Times was forced to issue a major correction on Monday after Pogrebin and Kelly claimed to have uncovered another alleged incident in which Kavanaugh’s penis was thrust into a female student’s hand.

A classmate, Max Stier, saw Mr. Kavanaugh with his pants down at a different drunken dorm party, where friends pushed his penis into the hand of a female student. Mr. Stier, who runs a nonprofit organization in Washington, notified senators and the F.B.I. about this account, but the F.B.I. did not investigate and Mr. Stier has declined to discuss it publicly. (We corroborated the story with two officials who have communicated with Mr. Stier.) –New York Times

Except – much like Keyser’s bombshell which undercuts Blasey Ford’s story, the Times journos omitted the fact that the new accuser refused to be interviewed, and has no memory of the incident.

Yellow journalism at its finest, courtesy of the New York Times.

….”That story (Kavanaugh) is nowhere near the standard that should be met in publishing a story.” @brithume @FoxNews

The whole thing smelled rotten from the get-go; but if you expressed doubt about Ford’s account, you were immediately called an apologist for rapists and a sexist, if you were a man. The #metoo culture is political tribalism at its finest. The grand Kavanaugh smear campaign only hurt the real victims of sexual assault. It did not empower the victims at all!

What’s the betting that no-one is seriously prosecuted for this blatant malicious slander, and the NYT, Wapo & CNN etc will be doing it all again next year? The people who run the show and the people they use/pay to run it are never held accountable for any criminal destruction experienced in any of the show’s episodes. #911 #wot #russiagate #epstein-et-al

A bevy of malleable, neurotic women serving as useful neurotics to guide the affairs of state by invisible hands. How lovely.