Are the Russians at it again? Have they gone and attempted another assassination using a banned nerve agent? Right now, a British couple is hospitalized in Salisbury District Hospital due to their exposure to an ‘unknown substance’ a few miles away from where the Skripals were discovered following their alleged exposure to the banned nerve agent novichok.

British police said Wednesday that two people are in a critical condition in a Salisbury hospital after being exposed to an “unknown substance”, just a short distance from where former Russian spy Sergei Skripal and his daughter were poisoned.

The two patients “are both currently receiving treatment for suspected exposure to an unknown substance at Salisbury District Hospital,” Wiltshire police said.

“They are both in a critical condition,” the police said, adding that they considered the situation a “major incident”.

The two people, a man and a woman both in their 40s, were discovered unconscious on Saturday June 30 at a house in the village of Amesbury, which is around a dozen kilometres (eight miles) from Salisbury.

Sergei and Yulia Skripal were found slumped on a bench in the city in southwestern England where the former double agent lived in March, sparking a bitter diplomatic crisis between Moscow and London, which says a Soviet-made nerve agent dubbed novichok was used on the pair.

Wiltshire police said they initially suspected that the two people had fallen ill after using “possibly heroin or crack cocaine from a contaminated batch of drugs.”

“However, further testing is now ongoing to establish the substance which led to these patients becoming ill and we are keeping an open mind as to the circumstances surrounding this incident,” they said.

Security cordons have been set up around the areas where the two people went before they fell ill, police said, and security has been boosted in both Amesbury and Salisbury.

A Public Health England (PHE) spokesman said “it is not believed that there is a significant health risk to the wider public.”

“This will be continually assessed as further information becomes known,” they said in a statement.

Skripal and his daughter Yulia, who was visiting from Moscow, collapsed on March 4 in Salisbury. They were treated for an extended period of time before being released from Salisbury hospital.

Russia has rejected British accusations of involvement in the Skripal poisoning, which sparked a diplomatic crisis that saw Russia and the West expelling dozens of diplomats in tit-for-tat moves.

No doubt, British Foreign Minister Boris Johnson is ‘absolutely categorical’ that this couple, too, has been exposed to novichok, and one can already hear Prime Minister Theresa May declaring that the Russians are behind it. Could this be Skripal 2.0? Are the Brits going to give the nerve agent accusations another shot, to maybe accomplish whatever they didn’t get done relative to the Russians last time around? As this story develops, we’ll see how the British government chooses to spin the story. 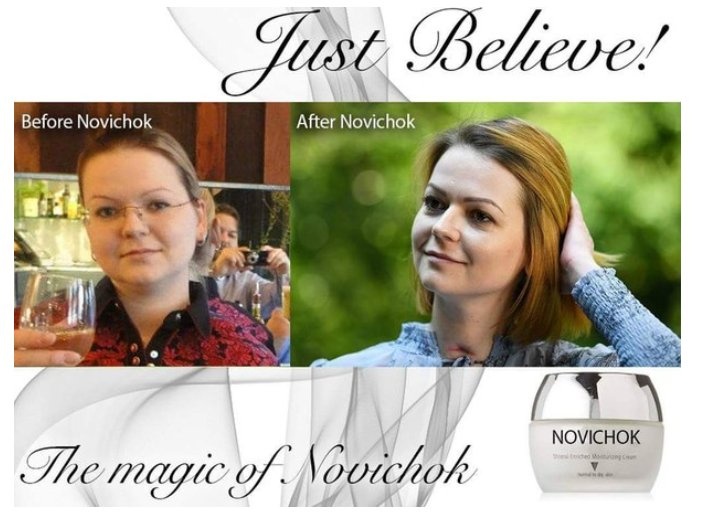 “a house in the village of Amesbury, which is around a dozen kilometres (eight miles) from Salisbury.”

HOW MANY miles away from the military laboratory of Porton Down?
14 km, or 8.6 miles. In fact Amesbury is closer to Porton Down than to Salisbury:
https://www.rome2rio.com/fr/map/Amesbury-Angleterre/Porton-Down

Laughed when I read the title. Wash, rinse, repeat, just like Trump paying the White Helmets in Syria to stage another gas false flag attack there. Credibility is shot to hell for the USA and UK far into the future at this point.

Ahahaha! I am at the laughing stage!

Timing: England play Columbia in the very successful Russian World Cup, England was so desperate to host. Remember, Christopher Steele, who provided the Trump Dossier, was involved in the England World Cup bid, when we lost to Russia. What happens, should we reach the finals, considering the Government has banned politicians and Royalty from attending? Funny how the politicians were complaining of having to vote, missing the match? No doubt, seriously cheesed off they missed out on the Government freebie to watch the World Cup in Russia. Prince William watched England slay at the World Cup with the Crown Prince… Read more »

Someone else who wants the British Government buy their house for an inflated price? Looks like this “Drop and Buy” government compulsory purchase scheme could become very popular in cash strapped BREXIT Britain…