Turkey is going on the attack against John Bolton following his weekend antics in the Middle East, which most recently included being snubbed by Erdogan in the Turkish capital. Bolton has now gone “rogue” and tried to undercut Trump’s Syria pullout decision by setting his own preconditions, writes the editorial board of Turkey’s most visible pro-government English language daily newspaper.

The pro-Erdogan, AKP-supporting Daily Sabah says “a soft coup against Donald Trump” is underway, but that Trump’s “rogue” National Security Adviser got a “rude awakening” upon visiting Turkey yesterday:

If U.S. National Security Adviser John Bolton thought yesterday’s visit was going to be a walk in the park, he must have had a rude awakening thanks to the lukewarm reception in the Turkish capital Ankara. In retrospect, it was probably a bad idea for Bolton to go rogue and try to impose conditions on the United States withdrawal from Syria. Keeping in mind that Turkey was already getting ready to send its troops to northern Syria before U.S. President Donald Trump’s surprise announcement last month, it is time for Washington to accept that it isn’t negotiating with Turkey from a position of power. 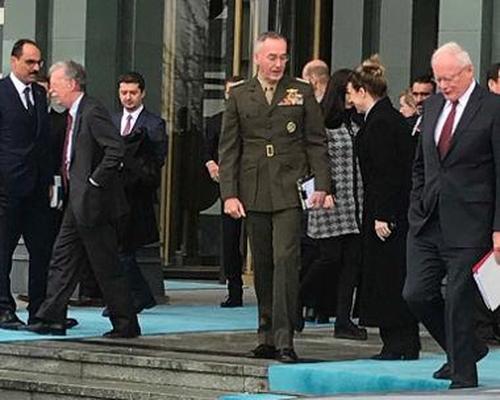 The op-ed declares case closed for any doubts about a fierce resistance seeking to subvert Trump within his own administration:

If there was ever any doubt that the resistance within the Trump administration wasn’t real, what happened in light of Trump’s decision to leave disproved the skeptics. Bolton and several other members of the Trump administration are committing a serious crime by preventing the current president of the United States from reversing his predecessor’s misguided decisions in the Syrian theater. What is happening today isn’t a policy debate, but a direct challenge to American democracy by unelected paper-pushers. Indeed, “many of the senior officials in his own administration are working diligently from within to frustrate” President Trump’s agenda.

Bolton is pushing for Trump to hold off on withdrawing 2,000+ US troops from Syria until it had received assurances from Turkey that the Turks wouldn’t attack US-backed Kurds in the region. Bolton revealed the change in direction during a Sunday interview, ahead of a planned trip abroad where he will visit Turkey and Israel to discuss the terms of the US withdrawal; however, the degree to which Trump has personally signed off on Bolton’s “preconditions” remains unclear, and for the past week contradictory messages have been issued from both Pentagon and admin officials.

Instead of meeting with Bolton, Erdogan used a prescheduled speech in parliament to criticize American proposals that the Kurdish group play a key role in Syria after the US withdraws, according to Bloomberg.

Turkey goes on the attack against Bolton: accuses him of going "rogue" and seeking to undercut Trump's decision to pull out of Syria by setting his own conditions. "A soft coup against Trump is underway." https://t.co/cTCQB5x64i

Notably, on Monday President Trump slammed a New York Times piece that heavily quoted Bolton, suggesting new preconditions on the announced Syria draw down, and that Bolton had effectively “rolled back” Trump’s decision to “rapidly withdraw from Syria.”

Trump blasted the Times via Twitter, saying the newspaper published “a very inaccurate story on my intentions for Syria,” and that the policy that remains is “No different from my original statements, we will be leaving at a proper pace while at the same time continuing to fight ISIS and doing all else that is prudent and necessary!”.

The Failing New York Times has knowingly written a very inaccurate story on my intentions on Syria. No different from my original statements, we will be leaving at a proper pace while at the same time continuing to fight ISIS and doing all else that is prudent and necessary!…..

The Daily Sabah continues, declaring a “soft coup is underway”:

A soft coup against Trump is underway in the United States. In recent days, anonymous U.S. officials, like the author of the infamous op-ed in The New York Times, haverepeatedly lied to the American people in an attempt to force Trump to walk back from his comments about Syria.

And further, the op-ed declares the writing is on the wall in terms of US failing influence in Syria and over the Kurdish question, and calls on resistors within the administration to “wake up”:

Bolton and other leaders of the “resistance” must stop beating a dead horse and wake up to the fact that they are not negotiating with Turkey from a position of power. The Turkish government had unveiled its plan to target PKK/YPG targets in northern Syria long before Trump decided to withdraw from Syria. If senior U.S. officials keep making up new rules as they go, the Turks will run out of patience.

The observation that US negotiators have lost any position of power certainly played out yesterday when a defeated looking and frowning US delegation, appearing disunited among themselves, was photographed exiting the presidential compound in Ankara.

The astute geopolitical blog Moon of Alabama rightly concluded, “And with that, Bolton was humiliated and the issue of the U.S. retreat from Syria kicked back to Trump.”

President Trump should dismiss Bolton right away. He has waited far too long with this move.

Good idea but dangerous for Trump. Firing Bolton, Government shut down could lead to impeachment. Butt hurt Democrats are tightening the noose around Trump’s neck.

Trump has a lot of supporters in America: So if the back stabbers get their way and oust him, then I would suggest people don’t travel to America for while. And I am not a Trump supporter.

You fool only the stupid. Keep on sneakily working together with this deceitful ruse to preserve your sicko ISIS and FSA terrorist henchmen in illegally-invaded resource-rich pro-democracy Syria you false-flagging bunch of coward-pervert Zio-liar war criminals.

Get rid of that pr#*k Bolton. He’s a big buddy with Netanusomething, a bigger pr#*k than Bolton. I don’t like using that word but that’s what I call warmongers. The only reason were in Syria is for that Israel pr#*k warmongering Netausomething and you know it Donald, you and your son in law kiss his butt.

Soon enough it will be Civil War II in the US. Then the rest of the world can somewhat carry on and not worry about the fallen empire trying to bring “democracy” to them by force.

Stupidist comment all day, there will never be another civil war…NEVER!

Why did Trump accept Bolton! Anyone who follows USA news knows what a warmonger Bolton is and always has been. Perhaps, with all the other vile things Trump has to defend himself from, he did not pay enough attention to Bolton’s background as a warmonger! Trump needs a circle of wise, informed supporters, devoted people he can trust and whom will give him sage advice.

Its hilarious to see how you are all eager to see the kurds getting annihilated by Turkey. So much hate for the US but think about the consequences for the kurds that work so hard to help defeat ISIS!

Not this guy, I cannot stand Erdogan. He’s a bully dictator who thinks he’s some kind of God.

The only Nation that suffered a soft Coup was Turkey..Erdogan thinks he’s the only one that knows play games..Erdogan is nothing but another bully dictator who eventually meet the same fate as Saddam or Ghadaffi…

And if Turkey does decide to move militarily against the Kurds, the US can do nothing — or it will trigger NATO’s Article 5.