As Democrats, the Deep State, NeverTrumpers, and the entire globalist elite look for some kind of proof that Russia meddled in the US election (it has been one year and counting and still zero evidence has turned up), more rock solid proof keeps surfacing that the media establishment, the Obama White House, and the intelligence community worked diligently to get Hillary Clinton elected, and failed miserably.

You can now add Facebook to the long list of companies and media platforms that colluded with the Clinton campaign to get Hillary into the oval office.

Remember that just the other day Facebook CEO Mark Zuckerberg had to admit that no evidence has been found to show that Russia used Facebook ads to sway voter turnout and get Trump elected.

The Democrat-media complex has shifted their blame to Russian-linked Facebook ads and ‘Russian troll farms’ as to why Hillary Clinton lost the 2016 presidential election.

Hillary is mortified after losing a rigged election so she must lay the blame on someone or something else.

Podesta emails reveal that Facebook COO Sheryl Sandberg wanted Hillary Clinton to win “badly”, provided research to her in March 2015 and met privately with her on multiple occasions.

In one email exchange released by Wikileaks, Sandberg says she wanted Hillary to win “badly”.

Multiple emails were sent between Sandberg and  Podesta, the campaign manager for Hillary Clinton’s 2016 campaign.

The Facebook COO clearly expressed that she wanted Hilary to win the election, and noted her willingness to help the campaign in any way possible.

The first email chain occurred in May and June of 2015.

And I still want HRC to win badly. I am still here to help as I can. She came over and was magical with my kids. 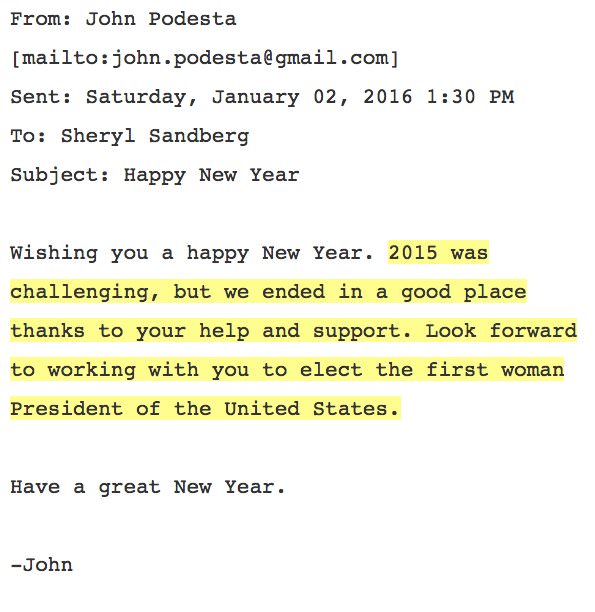 RT explains the predicament that Facebook and the Clintons now find themselves in.

The second email communication was an email exchange between Podesta and Sandberg. Podesta noted that 2015 was a difficult year for the Clinton campaign, and said their progress would not have been possible without Sandberg’s support

“I enjoyed spending time with you yesterday…I look forward to continuing our conversation.”

You can read the full email here.

Wishing you a happy New Year. 2015 was challenging, but we ended in a good place thanks to your help and support. Look forward to working with you to elect the first woman President of the United States.

Did Faceboook COO Sheryl Sandberg influence the 2016 US election?https://t.co/017dSyDxjm pic.twitter.com/UzFZHXK55J