On Friday US Secretary of State Mike Pompeo issued a statement ahead of the Syrian government’s campaign to liberate Idlib from ISIS/Al Qaeda jihadist control.

Pompeo sent a warning to Russian Foreign Minister Sergey Lavrov, followed with a tweet pretending to care about the people in Idlib, captive under the very jihadists the CIA and Obama White House helped train and arm…

“The 3 million Syrians, who have already been forced out of their homes and are now in Idlib, will suffer from this aggression. Not good. The world is watching.”

According to Zerohedge, both Washington and the mainstream networks are gearing up for a possible final US-Damascus-Russia confrontation in response to Assad’s military action in Idlib, representing the northwest province as “the last rebel stronghold” where Damascus simply seeks to “massacre civilians”.

But Washington officials often contradict their own past positions, and this is glaringly clear in the case of Idlib, where Brett McGurk — the White House appointed anti-ISIS envoy who essentially acts as the president’s personal diplomat in Iraq and Syria — previously described the true situation on the ground in unusually frank comments:

“Idlib provice is the largest al-Qaeda safe-have since 9/11, tied to directly to Ayman al Zawahiri, this is a huge problem.”

The rare, honest assessment was spoken a little over a year ago on July 27, 2017 at a Washington D.C. event in which McGurk was a panelist hosted by the Middle East Institute.

During the panel discussion, McGurk posed:

“But we have to ask a question; why and how is Ayman al-Zawahiri’s deputy finding his way to Idlib Province. Why is this happening? How are they getting there? They are not paratroopers…”

Yes, we’ve long wondered the same thing, especially when it was US intelligence directly assisting the al-Qaeda coalition Army of Islam (now morphed into Hayat Tahrir al-Sham) from an “operations room” in Turkey.

At the time, McGurk’s comments were aimed at NATO ally Turkey, which he accused of facilitating jihadist entry into northern Syria to displace the US-backed Syrian Kurdish SDF.

“The approach by some of our partners to send in tens of thousands of tons of weapons, and look the other way as these foreign fighters come into Syria may not have been the best approach,” McGurk continued during his 2017 comments.

He added that al-Qaeda has taken “full advantage” of Turkey allowing for the free flow of arms and jihadists across its lengthy border with Syria.

Of course McGurk neglected to mention that the United States was a willing partner in all of this throughout most of the entirety of the Syrian war, which sought regime change in Damascus. The Turkish foreign ministry condemned his statements at the time.

The State Department would of course hope that the American public forgets these words were ever spoken.

Meanwhile Russian Foreign Minister Sergei Lavrov has warned the West not to interfere in Syrian and Russian forces engaged in anti-terror actions in Idlib:

“I hope our Western partners will not give in to [rebel] provocations and will not obstruct an antiterror operation,” he said.

It appears that the State Department circa 2017 actually agreed with Lavrov’s calling the Idlib militants terrorists even in the State Department in 2018 does not. Or it’s also just Washington contradicting itself as usual for the sake of yet more nefarious foreign policy goals in the Middle East.

There does not have to be a difference between the State Department in 2017 and 2018. It may well be that it recognizes the fact that the militants in Idlib are dominated by terrorists, but does not want them to be fought because these terrorists are considered useful.

Ron Paul: “Remember Aleppo, where the US claimed Assad was planning mass slaughter once he regained control? As usual the neocons and the media were completely wrong. Even the UN has admitted that with Aleppo back in the hands of the Syrian government hundreds of thousands of Syrians have actually moved back. We are supposed to believe they willingly returned so that Assad could kill them? The truth is Aleppo is being rebuilt. Christians celebrated Easter there this spring for the first time in years. There has been no slaughter once al-Qaeda and ISIS’ hold was broken. Believe me, if… Read more »

All about the armament mfg.industry for the West and in particular ,the US,UK and France . Must keep the shareholder profits going after all it is probably the only thing that keeps these countries afloat .
Heaven forbid that we could/should have peace breaking out . In the mean time , more lies and deception.

Well, but this is more complicated than the author may think. Remember when Russia and Syria were displacing from E. Ghouta (Douma) fighters who refused to reconcile with the government? Remember where they sent them? Yes, it was Idlib. It seemed a little odd to me at the time, and now they seem doomed. It may have been a convenient place to warehouse them for lack of a better venue, but after all, there are a lot of non-combatants in Idlib too who are in jeopardy as a result of those trips in the green buses.

Why did Trump change his mind? 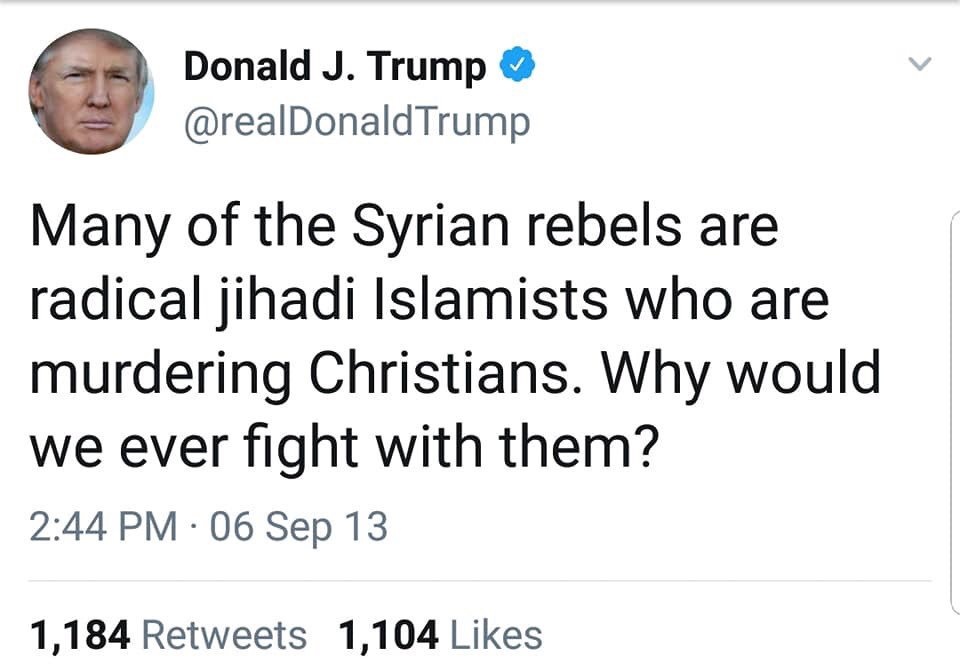 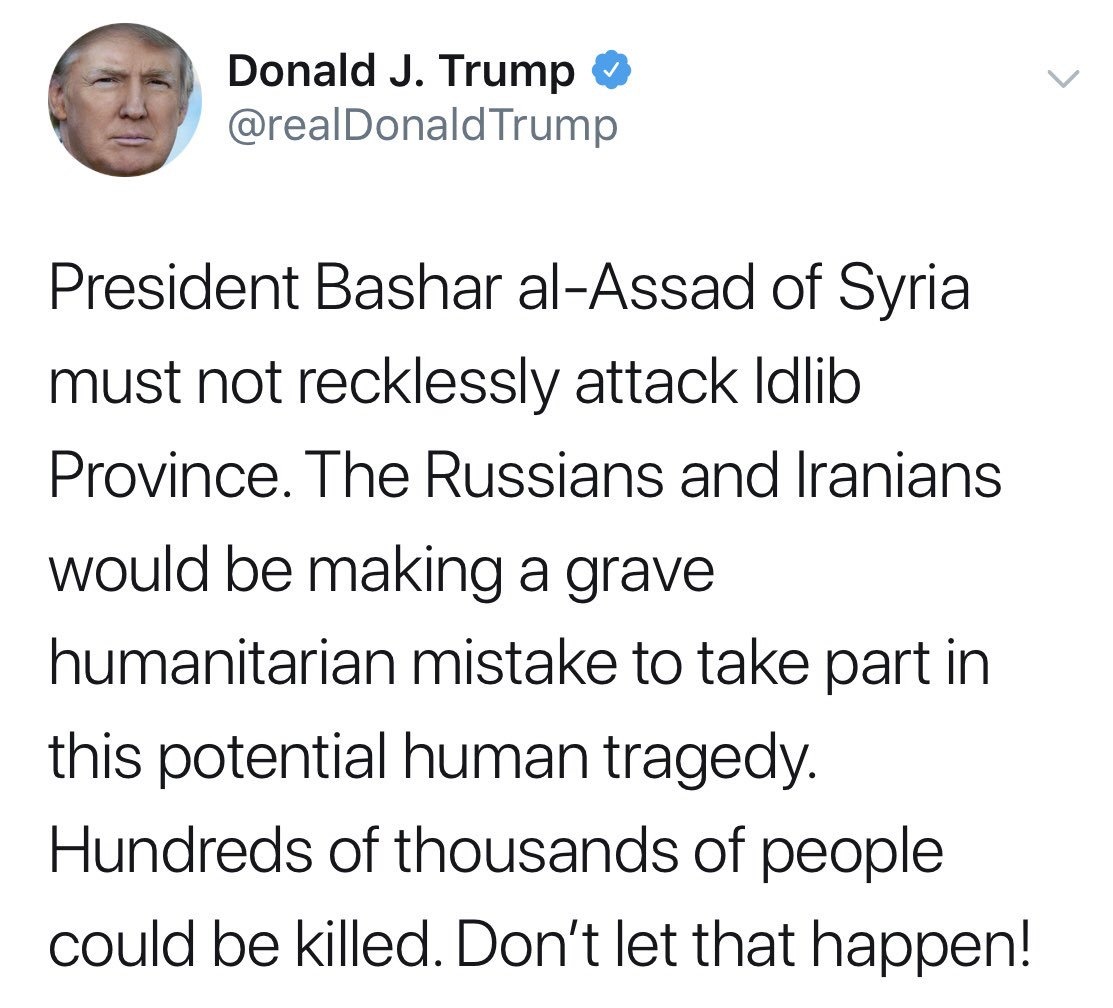 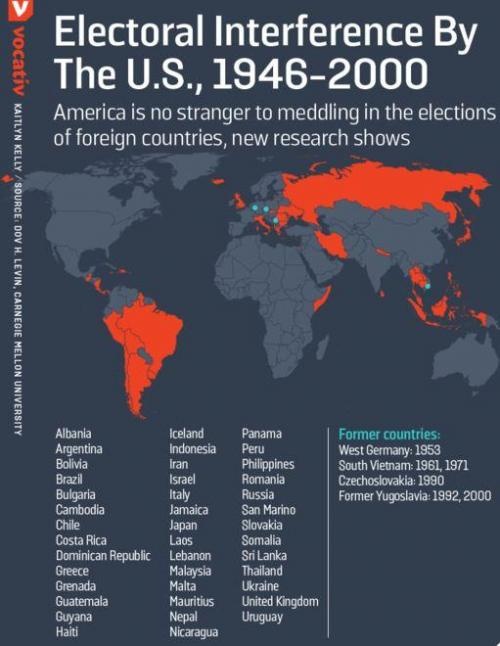